Research in medicine knows no international boundaries. Since its founding, the NIH has maintained close relations with many of its Western Hemisphere counterparts through the Pan American Sanitary Bureau, now called the Pan American Health Organization . In 1947, the first NIH grants were awarded to investigators in foreign universities, and in 1968, the creation of the John E. Fogarty International Center institutionalized coordination of international exchanges at NIH. The Fogarty Center also maintains liaisons with the World Health Organization and European medical research organizations. One branch of the center supports translation, documentation, and critical reviews of new health science information. 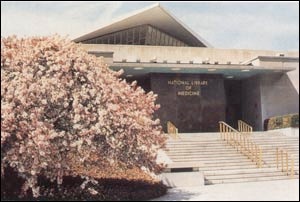 Worldwide biomedical communications are also fostered by the NIH's National Library of Medicine (NLM) . As the world's largest medical library, the NLM boasts a collection of more than 5.1 million items. Founded in 1836 as the library of the surgeon general of the Army, the NLM became a component of NIH in 1968. The NLM has made freely available on the World Wide Web a database holding the most current medical literature. Also available are LocatorPlus, the online catalog of books and manuscripts in the library, AIDSLINE, a subset of MEDLINE devoted to AIDS research, and various databases useful for researchers, practicing physicians, and members of the public who use the resources available for research on medical topics.