The second key provision of the 1944 Public Health Service Act authorized the National Institute of Health to conduct clinical research. After the war, Congress provided funding to build a research hospital, now called the Warren Grant Magnuson Clinical Center, on the NIH campus in Bethesda. Opened in 1953 with 540 beds, the hospital was designed to bring research laboratories into close proximity with hospital wards in order to promote productive collaboration between laboratory scientists and clinicians. Special care was taken to communicate to local physicians that the Clinical Center dealt only with research and did not represent a move toward "socialized medicine," which was opposed by most physicians in the 1950s. The Clinical Center was also launched under the shadow of revelations about Nazi medical experiments during World War II, thus a medical board was charged with reviewing research protocols to ensure that participants would not be harmed. During the 1960s institutions receiving NIH grant awards were required to state the ethical principles guiding their research involving humans. In 1979, the oversight process was codified into written guidelines for research on human subjects. The NIH Office for Protection from Research Risks, utilizing a computerized tracking system, now monitors over 500 major institutions and more than 5,000 smaller institutions, community hospitals, and clinics where research is conducted.

Any research protocol raises ethical uses about the treatment of research subjects, whether human or animal. Since its inception in 1887, the NIH has maintained the necessity for animal research and simultaneously has insisted upon humane treatment. "Animals are to be used in the proper work of the laboratory," wrote Hygienic laboratory director Dr. Milton J. Rosenau in 1904, but anything which inflicts pain upon them will not under any circumstances be allowed." In 1963 the NIH issued a guide for the care and use of laboratory animals that has gone through many editions and is considered a standard reference for scientific institutions. During the early 1970s, an official policy regarding the humane use of animals introduced the concept of institutional animal care committees for those institutions receiving NIH funds. In 1975 members of "study sections," the scientific peers of grant applicants who judge the scientific potential of each application, were assigned the responsibility of considering animal welfare in proposed projects before funds were awarded. Since 1985, NIH officials have conducted unannounced site visits to spot-check animal facilities and laboratory research programs. 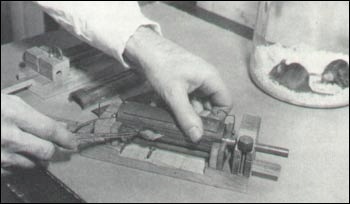 "In 1944, X-ray treatments for cancer were first tested on tumors for mice. This instrument was used to position the mouse so that only the tumor to be irradiated was exposed while the rest of the body was protected."