Accompanying growth in the grants program was the proliferation of new categorical institutes. Between 1946 and 1949, voluntary health organizations motivated Congress to create institutes for research on mental health, dental diseases, and heart disease. In 1948, language in the National Heart Act also made the name of the umbrella organization plural: National Institutes of Health. The original divisions of the old National Institute of Health were divided into two newly created institutes: the National Microbiological Institute (NMI) and the Experimental Biology and Medicine Institute (EMBI). The tradition of using such academic medical names, however, was being transformed by the conviction that institutes named after diseases stood a better chance for being funded by Congress. In 1950, the EMBI was absorbed by the newly created National Institute of Arthritis and Metabolic Diseases. In 1955 the NMI similarly became part of the National Institute of Allergy and Infectious Diseases. By 1960 there were ten components. This number increased by 1970 to 15, and by 1998 the NIH had 27 institutes and centers.

In addition, specialized offices such as the Office of AIDS Research, were created but subsumed administratively under existing components. 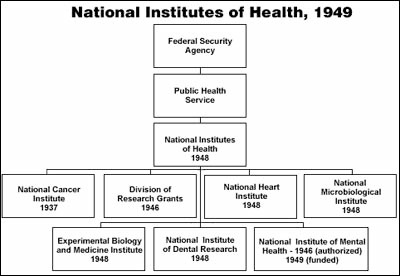