The Move to Washington

In 1891, the Hygienic Laboratory, as it came to be called, was moved to Washington, D.C., near the U.S. Capitol. For the next decade, Kinyoun remained the sole full-time staff member. He inaugurated a training program in bacteriology for MHS officers and conducted numerous tests of water purity and air pollution for the District of Columbia and the Congress. In 1901, the laboratory was belatedly recognized in law when Congress authorized $35,000 for construction of a new building in which the laboratory could investigate "infectious and contagious diseases and matters pertaining to the public health." Occupied in 1904, this building was located at 25th and E Streets, N. W., in Washington, D.C. The founding legislation for the NIH, therefore, resides in a routine supplemental appropriations act. Many other scientific agencies of the federal government were also created via "money bills." Congress was not convinced that such bureaucracies would prove demonstratively useful, so it chose to preserve the option of divesting the government of them simply by not renewing their funding. 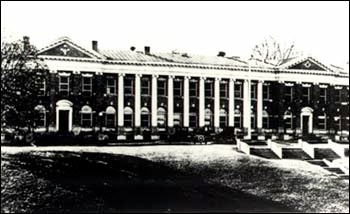 In 1902 two acts contributed significantly to the emergence of the Hygienic Laboratory as a center for research within the federal government. The first reorganized the MHS and renamed it the Public Health and Marine Hospital Service (PH-MHS), moving it toward its status as the chief U.S. public health agency. More importantly for the Hygienic Laboratory, the act launched a formal program of research by designating the pathological and bacteriological work as the Division of Pathology and Bacteriology and by creating three new components that represented the most fruitful areas for research at that time: the Divisions of Chemistry, Pharmacology, and Zoology. The importance of these new programs was underscored by the provision that the PH-MHS could hire scientist researchers with Ph.D.'s to head them. Up until this time, the professional staff had been limited to physicians.