Dr. Christian Anfinsen went through a lot of Genuine Whatman Filter Paper, No. 1 during his career. There are different grades of filter paper; No. 1 was labelled, “For ordinary work, retaining medium sized particles. Qualitative or rough quantitative.” It’s used in paper chromatography, a method that Anfinsen performed in many of his experiments, in which chemical substances are separated based on how far they migrate on the specially prepared piece of filter paper. Paper chromatography was developed in England by R. Consden, A.H. Gordon, and Archer J.P. Martin in England in 1944, at the Wool Industries Research Association. Read their paper

Anfinsen and Dr. Daniel Steinberg sought to find out if proteins are created from a template in which all of the amino acids fit together as if in a mold, or if the amino acids first form shorter chains called peptides, which then combine to make proteins. Using radioactively-tagged amino acids developed by Anfinsen in chicken oviduct tissue and paper chromatography, they discovered that the amino acids first combined to make peptides. Their methods and results were reported in the March 5, 1951, NIH Record article (page 2) (PDF). 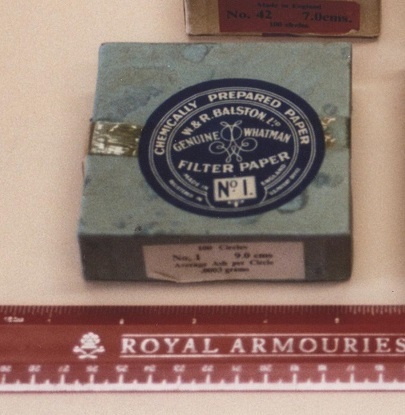