The Biochemistry & Genetics of Pain

The underlying theme in all the NAB projects was the dynamic activity-dependent plasticity of the nervous system. "Pain" emerged from these studies not as a simple sensory perception, but a complex set of responses to environmental situations.

Dubner's studies of the plastic and interactive neural connections underlying the responses of awake behaving monkeys to sensory stimuli, and the work of Dionne ,Gracely ,Max , and Bennett in discriminating the sensory and affective responses of awake behaving humans to acute and chronic pain, and relating these to neurochemical and neurophysiological mechanisms, were paralleled by continuing neuroanatomical work by Steve Gobel , and, after 1976, M. A. Ruda [with Jan Hylden and Haruhide Hayashi ].

Gobel's studies with the electron microscope traced the axons and dendrites of the trigeminal system and the spinal cord, identifying those neurons which projected to the brain, and mapping the network of local "interneurons" within the spinal cord. Some of these were "excitatory" interneurons, which appeared to act as synaptic relay stations, between the nerves sending information from the skin and internal organs, and the neurons carrying information to the brain. Others acted as inhibitors by creating neural 'dead ends', dampening or blocking the synaptic information.

In the late 1970s, Ruda used several newly developed methods to label and trace synaptic pathways. These included "tagging" cellular compounds with flourescent antibodies or with the enzyme horseradish peroxidase, or using nucleic acid probes which bind to cellular DNA. With these techniques, she was able to follow the activity of the newly discovered "chemical messengers" of the nervous system, the neurotransmitters and neuropeptides. By the mid-80s, a number of these mediators had been found to be active in the nervous system's response to pain. 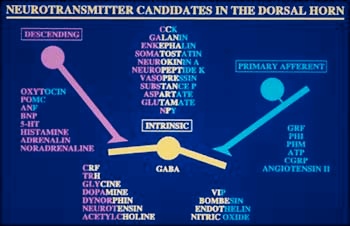 An illustration showing three different types of neurons within the dorsal horn of the spinal cord: projection neurons; excitatory interneurons; and inhibitory interneurons. 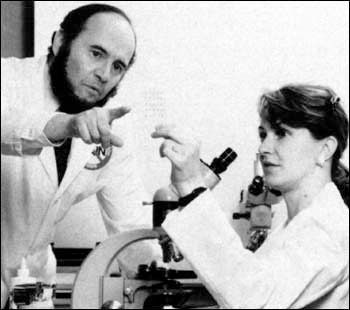 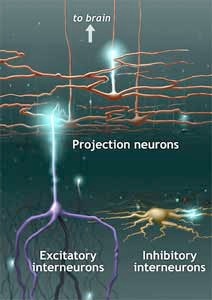 In 1982, Ruda was able to demonstrate that the endogenous, or internally produced, opioid enkephalin made direct synaptic contact with the spinal cord neurons projecting to the thalamus , implying that these projection pathways were a major site of this peptide's modulation of sensory input about pain. [A peptide is a specific type of amino acid.] Another neuropeptide of particular interest was dynorphin, a substance which normally "lies low" in the system, but becomes highly active in response to noxious stimuli. Although conspicuously absent from the nerves in the skin, this peptide is widely distributed in the brain and spinal cord. Ruda's studies showed that dynorphin synapsed directly onto the thalamic projection neurons, and was also active within the complex network of interneurons. Michael Iadarola had begun working on the molecular biology of neuropeptides in Erminio Costa's lab at NIMH in the early 1980s. He had measured dynorphin in the spinal cord by labelling and tracing its antibodies. He had also developed a method to clone predynorphin, the precursor protein which forms first in the genetic sequence that expresses dynorphin. But he needed a biological system that would allow him to look at real time changes in levels of the peptide. In the literature, he discovered an inflammation model used in the hind limbs of rats and realized that he could use the opposite, unaffected, limb as a control. Using this assay, he found that the painful synaptic input triggered a genetic regulatory sequence, called the enhancosome , that activated the transcription of the precursor protein and thus of dynorphin itself. 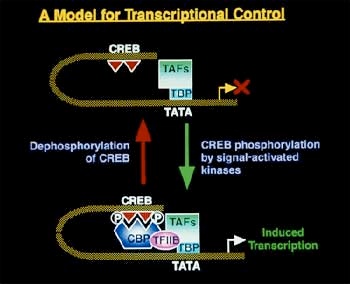 The enhancosome: twin phosphorylation and dephosphorylation reactions of promoter genes CREB and TATA regulate the transcription of dynorphin. Illustration courtesy of Michael Iadarola.

In 1986, Iadarola was invited to give a seminar at the NAB; Dubner and his colleagues decided that his genetic research would be an excellent complement to the existing research. Two years later, Iadarola and Ruda collaborated on an important paper in Proceedings of the National Academy of Sciences . They documented the increased biosynthesis of dynorphin - first the messenger RNA of predynorphin and then of dynorphin itself - in the spinal cord of the rat, in response to brief inflammation of the hind leg.

“The dynorphin connection weaves everything together in our work." -Mike Iadarola on dynorphin

Oral history interview with Michael Iadarola, 1999. Tapes and transcript to be deposited in the NIH History Office and the John C. Liebeskind History of Pain Collection, UCLA.

This impressive evidence of dynorphin activity in response to inflammation led the researchers to hypothesize that this peptide, like enkephalin, might be one of the body's endogenous analgesics. If dynorphin was administered to a normal animal, however, it proved to have an algesic effect; the animal became more sensitive to heat and touch stimuli. An extended series of studies by Robert Caudle while he was a research fellow at NIDR, have shown that dynorphin plays at least two roles in the nervous system's response to pain: inhibiting pain signals in acute injury, but having an excitatory, intensifying, effect on neural transmission in persistent, chronic pain.

Ruda and Iadarola have continued their laboratory investigations of pain, but have worked to integrate their studies vertically with clinical observations and research. Their studies have established that the plasticity observed in the behavioral responses to pain, and implied in the theory of chronic pain disorders as a toxic excitability of nociceptive neurons, can also be understood as a phenomenon of altered gene expression which underlies the neurochemical activity of the synaptic pathways.

“It makes no sense to assume that male and female processing of pain are the same.”

Oral history interview with M. A. Ruda, 1999. Tapes and transcript to be deposited in the NIH History Office and the John C. Liebeskind History of Pain Collection, UCLA.

Working with colleagues, including Ke Ren, Marino DeLeon, and Richard Nahin, in recent work, Ruda has concentrated on problems of gender differences in pain, and the effects of pain on neonatal development. She has examined the responses of newborn rats to painful stimuli and later retested the same rats as adults. Her observations suggest that the experience of pain during neonatal development has longterm sensory and behavioral consequences. She has also demonstrated crucial differences in pain responses between male and female animals and in different phases of the females' reproductive cycles. 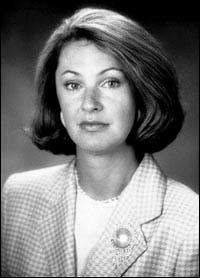 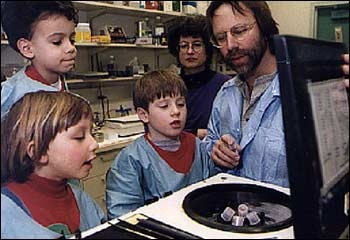 The 1998 NIH Symposium, " Gender and Pain ", organized by Ruda, brought together researchers from all over the country to discuss male/female differences in the epidemiology, physiology, pharmacology, and psychology of pain. Ladarola, working with such collaborators as Dr. H-Y. T. Yang, Jun Gu, and Donna Messersmith, has worked on describing the multi-step genetic expression of the precursor proteins for dynorphin and enkephalin under painful and stressful stimuli. His lab has helped to develop the new methods required for these experiments, including transient transfection (infection of a cell with nucleic acid to induce replication) and injections of drugs such as cocaine, morphine, and clonidine. Most recently, he and his co-workers have employed subtraction cloning to identify new pain-relevant genes in the dorsal horn.

In the mid-1990s, Iadarola, with Gracely, Dionne, and colleague Robert Coghill, began a series of studies of the brain, using PET [Positron Emission Tomography] imaging. In these images, researchers are for the first time able to observe the activity of brain cells responding to, and integrating, the pain information sent by the nervous system. They can compare the differential responses of normal volunteers and pain patients to heat, cold, and inflammation, and can correlate these with the subject's verbal assessment of the pain sensation.

A particularly exciting project began in 1998, when Iadarola and his co-workers decided to investigate a genetic therapy for chronic pain. They developed an innovative gene-transfer model that triggers meningeal cells to secrete beta-endorphin into the cerebrospinal fluid. The new therapy will soon be tested in clinical trials. For more information please view the NIH Catalyst article and NIH Catalyst commentary. 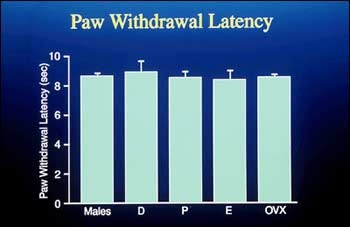 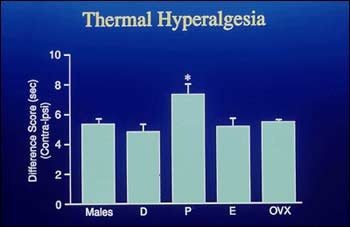