A Laboratory Model For Clinical Pain

Mitchell Max's clinical trials with diabetic neuropathy and postherpetic neuralgia patients addressed the major enigma of the pain field: the mechanism involved in chronic neuropathic pain. The classic neuropathic pain disorders are the agonizing conditions known as causalgia -- "the most terrible of all tortures", in the words of S. Weir Mitchell , the Civil War physician who first described it -- and reflex sympathetic dystrophy (RSD) (more recently termed chronic regional pain syndrome).

Usually occurring after nerve injury to a hand, foot, arm or leg, causalgia and RSD may be triggered by any minor injury, by a surgical procedure, or a serious trauma. They are characterized by pain which persists after the original injury has healed; by hyperalgesia , intensified perception of a mild painful stimulus, and allodynia , perception of pain in response to the lightest of touches; even by spontaneous pain, where the patient reports pain although no stimulus is present! The pain often proves resistant to all treatment, including medication, counter- stimulation, anesthetic blocks, psychotherapy, and even neurosurgery. The unhappy victim of such a syndrome becomes withdrawn and depressed, resists all physical contact, and guards the affected limb constantly.

Researchers had tried to reproduce the symptoms of neuropathic pain in animals, but without success. At NIDR, they injected the hind paws of rats with solutions causing brief inflammation, such as Freund's adjuvant or capsaicin , then tested them for hyperalgesia and allodynia by placing them on warmed surfaces and timing the "withdrawal latency" - the time before the rat lifted the affected paw. An improved method, developed by Kenneth Hargreaves of the NAB, was to place the rat in a glass box and direct a pinpoint radiant heat stimulus at the inflamed paw. An attached photoelectric cell measured the withdrawal latency in fractions of seconds. The rats showed increased withdrawal times, moving the affected paws more quickly when exposed to warm and mild heat stimuli. But the symptoms were short lived and there was no evidence of spontaneous pain.

In 1988, Gary Bennett, a physiological psychologist working in the NAB, and Yi -Kuan Xie, a visiting scientist from Beijing, decided to try tying loose ligatures around the sciatic nerve of the rat's left hind leg, to observe any changes in the firing rates of the affected nerves. (These changes would reverse as soon as the sutures were absorbed.) They left the rat overnight and came back the next day to find it guarding the affected paw in a very unusual way, refusing to let it touch the ground. This was the first observation of the chronic constriction injury model: the rat with symptoms similar to causalgia or RSD. 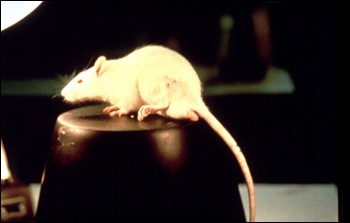 A rat guarding its paw 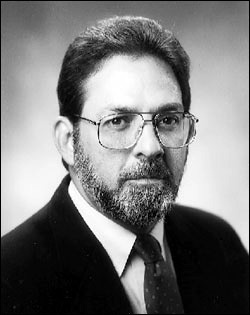 Bennett and Xie recognized the characteristic guarding action of a causalgia or RSD patient. Excitedly, they tested various non-painful and mildly painful stimuli on the rat's paw and found hyperalgesia and allodynia responses similar to those observed in patients. And, although the rat continued to eat, sleep and groom normally, the continued guarding behavior was evidence of some spontaneous pain.

Looking for human subjects to compare observations, Bennett consulted with Max and his colleagues at the Clinical Center , who were interested, but were not working with these disorders. He found the patients he needed at a clinic in Philadelphia, and, with their cooperation, began a series of comparison tests. As Bennett describes these studies, "It got to the point where we were doing so many things so rapidly to these patients that we started videotaping it, because things were happening very quickly....And some of these wonderful patients would come back two, three, four times for us; these people demonstrated courage, real courage." 1

This was the beginning of a close and exciting collaboration between Bennett in the lab and Max and Gracely in the clinic, comparing and discussing their observations.

Mitchell Max on the CCI model collaboration:
“Prior to this, the clinical work had been kind of isolated….now every month, the basic scientists had a new animal observation [to be verified in patients]; it was a very exciting time.” 2

Through careful comparison studies, Bennett and his colleagues established that the rat's behavioral responses to pain were very similar to those of the RSD patients. (One difference was that, after a period of time, the rat's abnormal behavior disappeared as the sutures were absorbed and the constriction relieved.) Bennett and his colleagues began recording the nerve activity patterns in the area of the rat's injury; these were characterized by persistent, spontaneous firing. Even in the absence of any direct stimulus, the rat's sensory system behaved exactly as it would in response to pain.

In an important 1988 paper, Bennett, Gracely, and Susan Lynch hypothesized that when certain injuries or inflammatory conditions triggered persistent firing over a long period of time, the ongoing nociceptive, or noxious, input created a toxic excitation of the brain and spinal cord cells - such that the entire system was chronically primed to signal pain in response to the mildest stimulus, or even to none at all.

The chronic constriction injury model helped open new avenues of research into the mechanisms of all forms of neuropathic pain and the search for effective treatments. 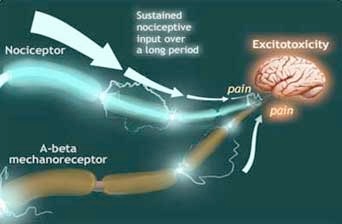