In 1957, Dr. Margaret Pittman became the first woman named chief of a National Institutes of Health (NIH) laboratory, the Laboratory of Bacterial Products, a post she held until her retirement in 1971.

In 1928, Pittman began working at the Rockefeller Institute of Medical Research (New York) with Dr. Rufus Cole on whether Hemophilus influenza caused influenza (it does not). Developing a vaccine against meningitis caused by a strain of H. influenza earned her an international scientific reputation before the age of 30. 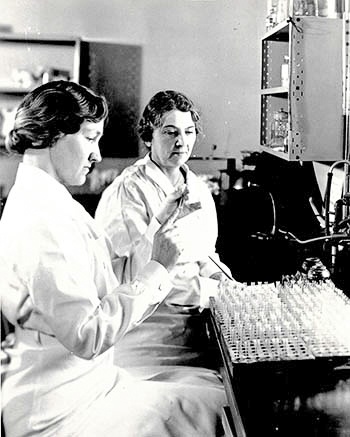 Dr. Pittman, at left, and Dr. Sadie L. Carlin reading an agglutination reaction, part of the test for potency of anti-meningitis serum (1937) National Museum of American History
She joined the NIH Division of Biologics Control (later the Division of Biologics Standards [DBS]) in 1936, with her mentor Dr. Sara E. Branham; they were both part of a group of women bacteriologists at NIH who had studied at the University of Chicago. Pittman and Branham worked to develop standards for the meningococcal antiserum.

During World War II, Pittman investigated the safety of blood and blood products, discovering and eliminating the cause of fever and death from plasma infusions.

In 1944, she developed a new assay to test the potency of the pertussis vaccine, under the direction of Dr. Milton Veldee, director of the Biologics Control Laboratory at the time.

After World War II, Pittman continued to work on other bacterial vaccines, including partnering with the Southeast Asia Treaty Organization to study cholera. She was also instrumental in assessing the efficacy of and establishing national and international standards for the production of yellow fever vaccine and typhoid vaccine. 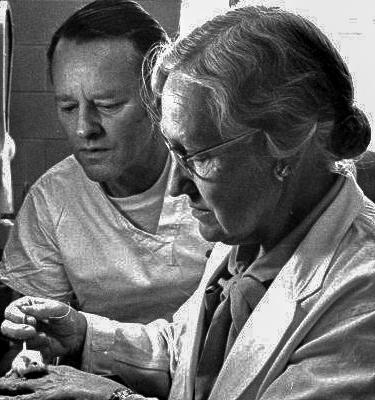 Dr. Pittman with her ‘right hand,’ technician James F. Marshall, in 1971 (caption provided by Dr. Pittman) “Margaret Pittman: Down to a 40-hour work-week,” Gail McBride, Medicine on the Midway, Spring 1987, pp. 3-8.
After her 1971 retirement, she continued as a guest worker in her office (Building 29, Fourth Floor) until 1993. Co-workers said that she "slowed down to working only 40 hours a week" after retiring.

In Her Own Words: