Robert Berliner, M.D., an eminent renal physiologist, helped establish early concepts of how potassium, sodium, hydrogen and water are transported by the kidney. He was recruited from Columbia University to NIH National Heart Institute in 1950 and became NIH Director of Laboratories and Clinics in 1968. Dr. Berliner was elected to the National Academy of Science in 1968. He left the NIH in 1973 to become dean of the Yale School of Medicine. 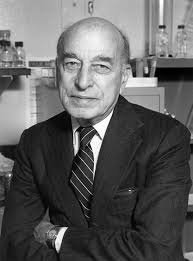