The Revolution of hand-washing 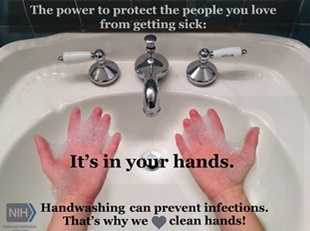 "One of the most remarkable developments of the last 50 years is the awakening of a sanitary conscience. It is a new thought to many men that the care of the body and cleanliness of surroundings are very considerable factors in the comfort, safety, and even the life and health of their fellow men.”

This image was featured in the Clinical Center Newsletter from July 2013 (PDF).

Find the entire catalog of NIH Clinical Center Newsletters, dating back until 1987. 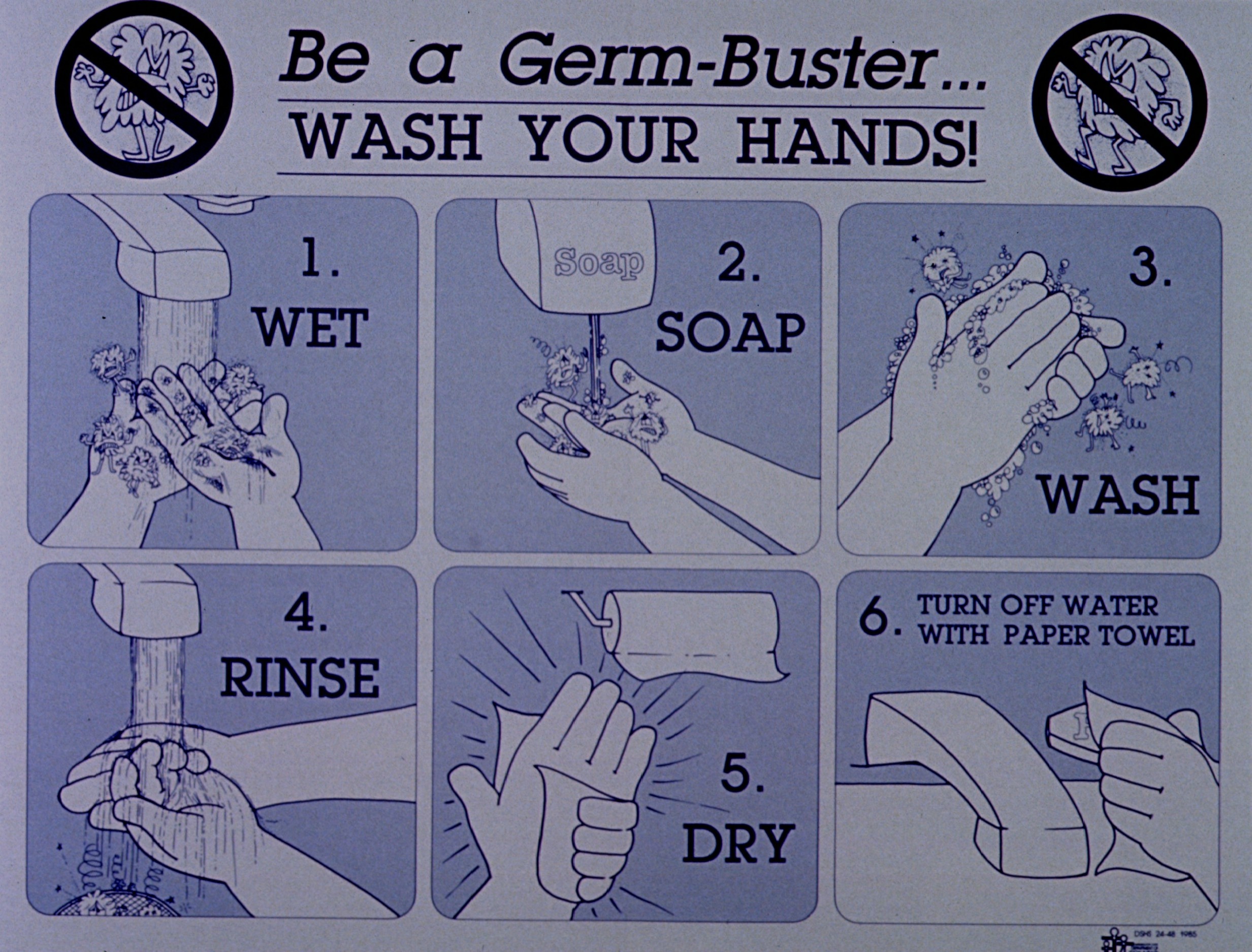 There are more posters and other images, available through the Photographs page, including the following:

Also check out our Posters Exhibit, which contains examples of bio-medical posters through the ages. 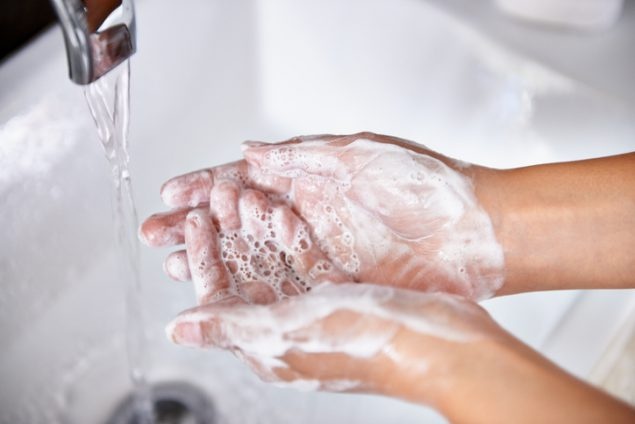 About 11 million Americans have heart valve disease, and millions of them need to have their valves replaced. The first successful replacement of a mitral heart valve was done at the NIH Clinical Center by Dr. Nina Braunwald in 1960, using a valve she had designed. This photo shows Braunwald, far left, and Dr. Andrew Morrow, far right, both from NHLBI, performing heart valve surgery in the early 1960s. February is American Heart Month, and February 22nd is Heart Valve Disease Awareness Day. 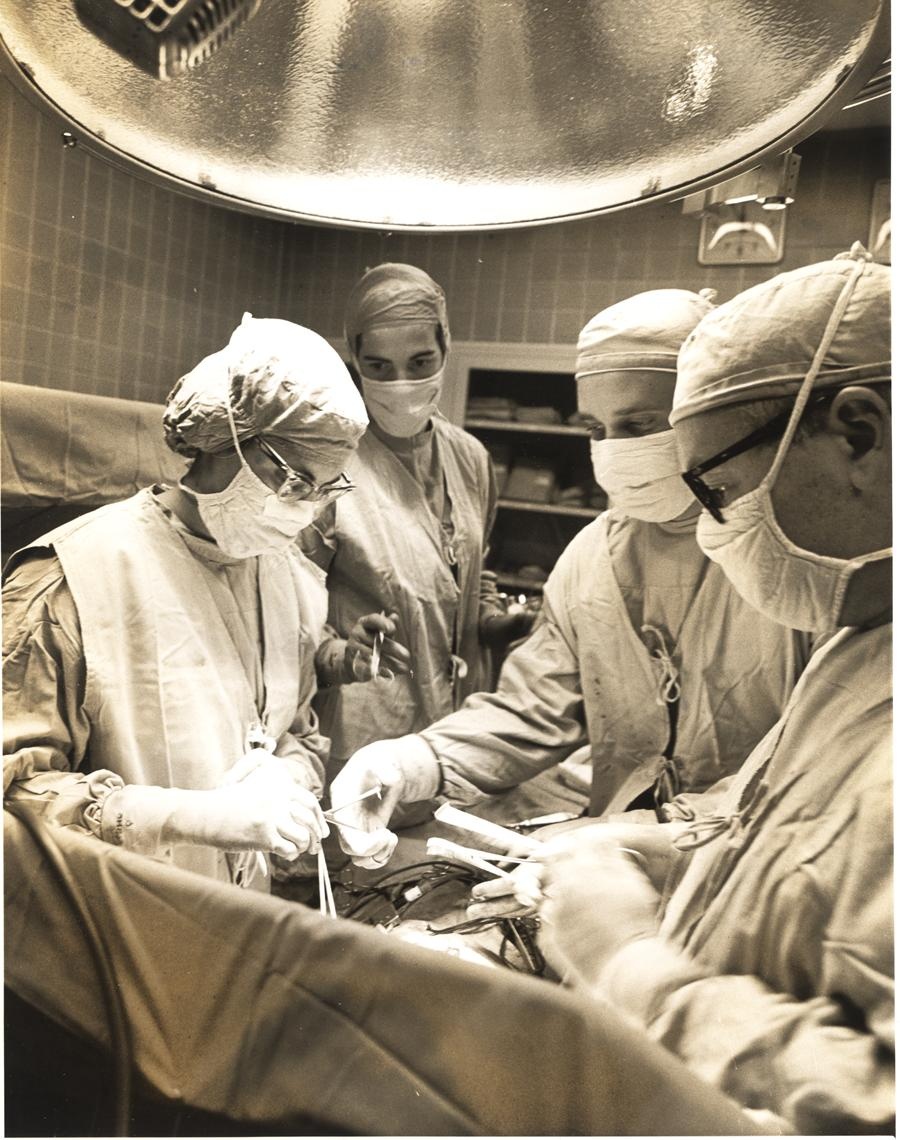 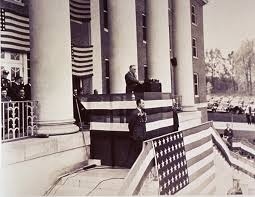 On October 31, 1940, President Franklin Roosevelt stood on the steps of Building 1 to dedicate the NIH campus in Bethesda, Maryland.  While this photo of him is very nice, as well as amusing for the broom leaning against the pillar, it’s even more impressive to see and hear the speech. Yes, it was filmed! 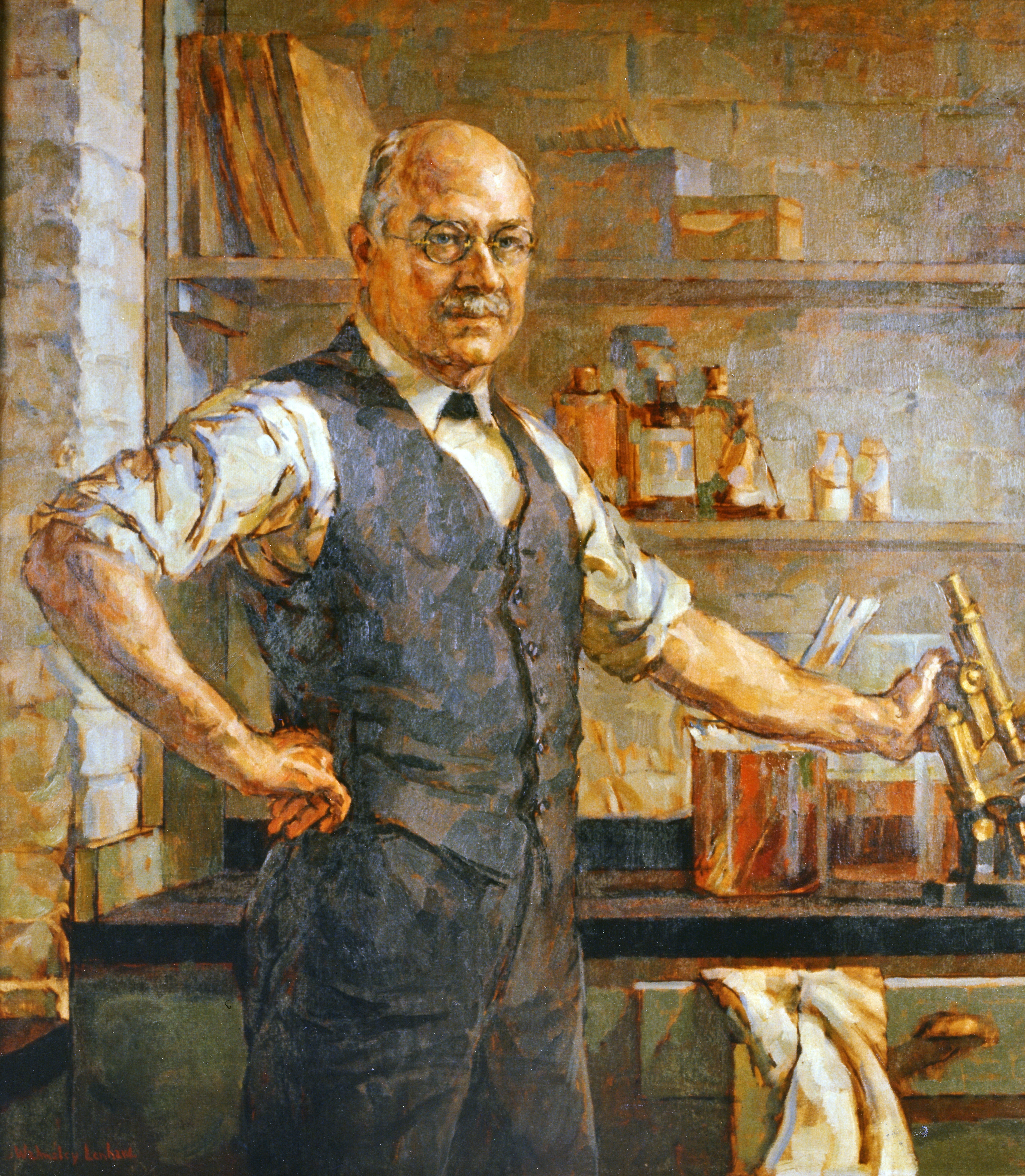 We keep wishing ourselves happy birthday because as an agency with a long history, we've had a few name changes. But the true beginning of the NIH was in August 1887, when Dr. Joseph Kinyoun became the first and only employee of the new Laboratory of Hygiene of the U.S. Public Health Service (then the Marine Hospital Service). His laboratory was in the Marine Hospital on Staten Island, New York.  Kinyoun helped to bring the new science of bacteriology to the service of protecting the public's health in the United States. 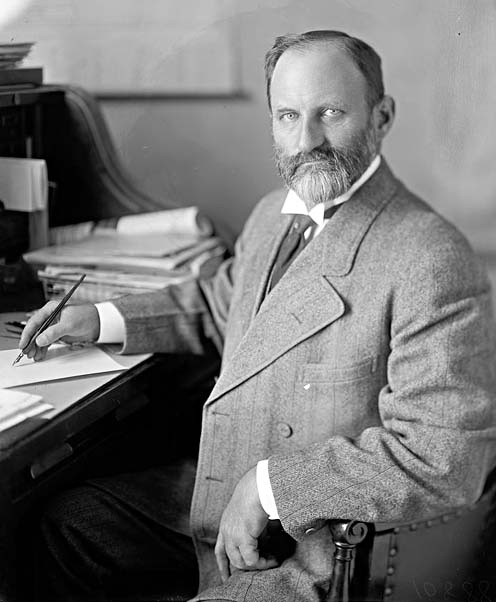 One of the most important events in NIH history happened on May 26, 1930:  the Ransdell Act was signed, creating the National Institute of Health.  #NIH was singular then, springing out of the Hygienic Laboratory of the Public Health Service.  Louisiana Senator Joseph E. Ransdell, pictured here, worked tirelessly to get the bill passed.  This legislation marked a change in the attitude of the U.S. scientific community toward public funding of medical research.

You can become an expert on Ransdell by reading “Inventing the NIH” by Dr. Victoria Harden https://archive.org/details/inventingnihfede00hard/page/n5 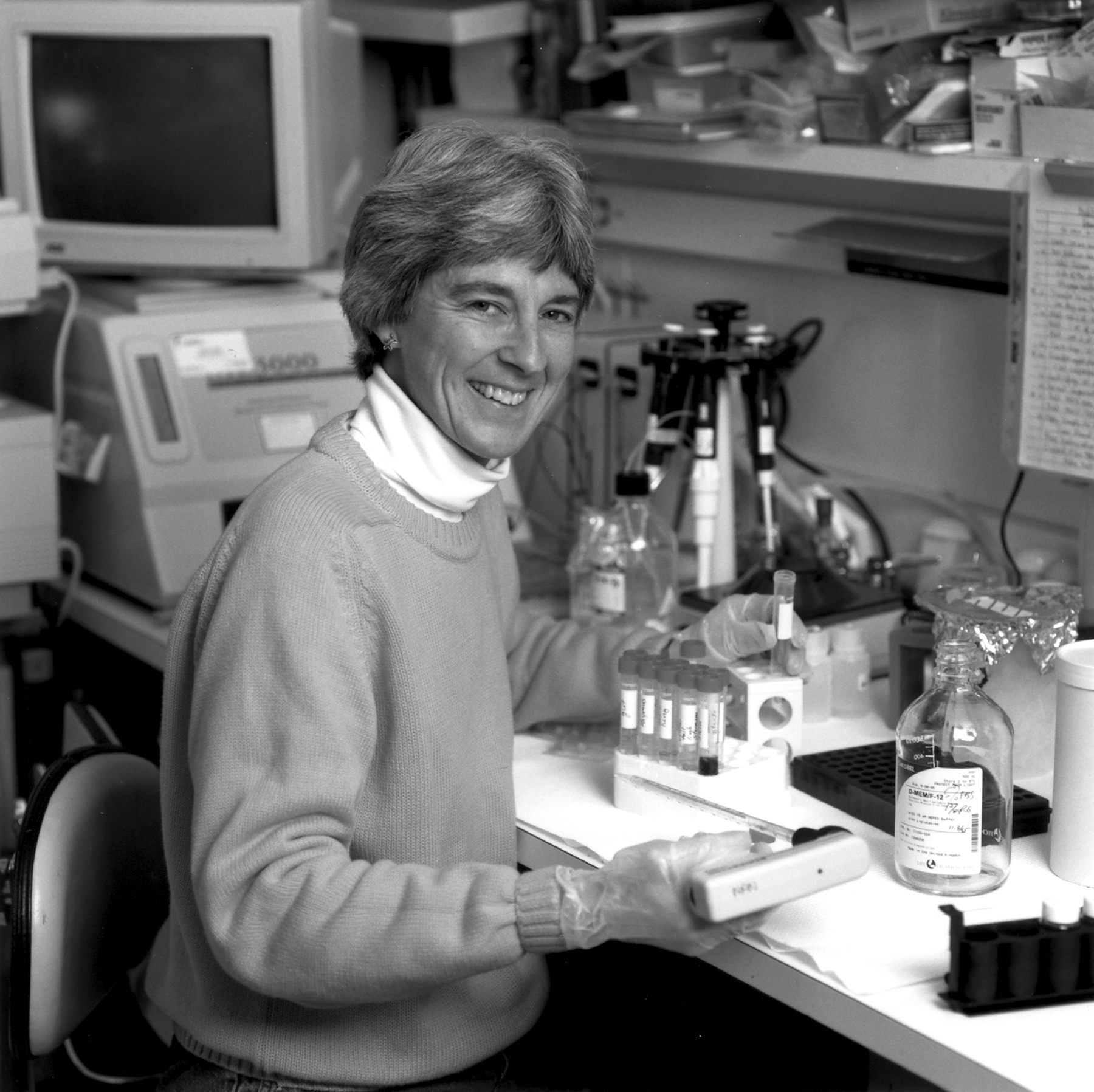 For Women’s History month, we’re introducing you to Dr. Anita B. Roberts (1942 – 2006), who was both a stellar scientist — she was among the top 50 most-cited researchers for 20 years — and a beloved mentor to dozens of young scientists.

Her pioneering work focused on the protein TGF-β, which is critical in healing wounds and bone fractures and can either block or stimulate cancer development.  Roberts joined #NCI in 1976, becoming the chief of the Laboratory of Cell Regulation and Carcinogenesis in 1995.

The Anita B. Roberts Lecture Series is organized by the #NIH Women Scientist Advisors Committee to highlight outstanding research achievements by female scientists @IRPatNIH.  The series is supported by the Office of Research on Women’s Health.  Learn more about Roberts and the lecture series https://bit.ly/2tqabmx  #WomensHistoryMonth