In the late 1970s, Earl gradually shifted the focus of his research from the regulation of enzyme activities to that of protein turnover—the process by which damaged or inactivated proteins are removed from cells. How do the cells recognize malfunctioning enzymes? What are the signs of those "troubled" enzymes? In short, what governs the regulation of protein turnover? After studying the activity of normal or "healthy" enzymes for decades, Earl sought to understand how cells can selectively degrade certain proteins which are no longer needed because of changes in their environment. This problem led him to investigate the characteristics of "not-so-healthy" enzymes and their ultimate degradation into smaller pieces, such as amino acids. It was largely an unexplored area of research in biochemistry.

From previous studies in other laboratories, Earl was aware that the amount of enzymes in cells was generally affected by the nutritional state of the organism. Taking this information as a clue, Earl and co-workers set up experiments for the controlled starvation of E. coli , by cutting off the source of nitrogen or carbon during its growth in culture media; and they examined the amounts of fifteen enzymes that were extracted from these starved bacteria. The results were mixed: some enzymes showed an increase in their amounts during starvation; others a decrease; and still others no change. Earl then focused on the enzymes whose level of concentration dropped substantially. Among them was glutamine synthetase, which once again became a central research material in Earl's laboratory.

In the early 1980s, Earl and his co-workers—Jennifer Rivett, Cynthia Oliver, and Rodney Levine, among others-discovered the "two-step mechanism of enzyme degradation," by which a given enzyme undergoes an inactivation process before its eventual degradation. For example, they found that glutamine synthetase has lost its activity before it is actually attacked by proteases. They showed that oxidative modification of some amino acid components of a protein "marks" it for degradation. Among several different kinds of oxidative modification, they demonstrated that some amino acids in a protein are oxidized to carbonyl derivatives such as aldehydes and ketones. Subsequently, they developed a number of analytical procedures for the detection and quantification of the amount of carbonyl derivatives in the protein. These procedures are the basis of what has become the most widely used marker of "oxidative stress-induced cellular damage." The relationship between protein oxidation and protein degradation—the former as initiating the latter—was also confirmed by several observations, including the one that many common proteases degrade oxidized proteins more rapidly than unoxidized forms.

Furthermore, Earl's team provided a detailed explanation about how protein oxidation takes place in cells. According to the scientists, a major pathway for the oxidation or "marking" process requires at least three elements: oxygen, iron, and an electron donor (e.g., NADH, which is a reduced form of NAD, nicotinamide adenine dinucleotide). This set of elements is called the "mixed-function oxidation" (MFO) system, or the "metal-catalyzed oxidation" (MCO) system. Within this system, the electron donor gives away electrons to oxygen (O2 ) and the iron ion (Fe3+ ), reducing them to hydrogen peroxide (H2O2 ) and another form of iron ion (Fe2+ ). Then, this ion binds to a specific site of the protein, where hydrogen peroxide reacts. It results in the generation of the hydroxyl radical ( •OH), a free radical that provokes a chain of reactions ultimately leading to the oxidation of protein. It is notable that, unlike other reactions involving free radicals, this metal-catalyzed process is highly site-specific.

Having found the unique requirement for protein oxidation and its mechanism, Earl sought to understand the implication of oxidative inactivation of enzymes in the organism. He undertook a broad literature survey and was elated to find useful information: it had been demonstrated that catalytically inactive or not very active forms of enzymes accumulate during aging. To Earl, it meant a possible linkage between protein oxidation and aging. To verify this linkage, Earl and his co-workers examined the level of oxidized proteins in sources of different ages. The experimental result was illuminating. The carbonyl content of proteins in cultured cells from human donors increased exponentially with respect to the age of the donor. They reported this result in 1983 at a conference on aging. Subsequently, they expanded their research into other animals, and their technique of measuring the carbonyl content was widely adopted as a standard method for quantifying protein oxidation.

To be sure, Earl's group was not the first to notice the biochemical function of free radicals in the body. After World War II, the field of free radical biochemistry was born amid increasing social concern about radiation poisoning and radiation-induced mutations. In 1954, Rebecca Gershman and Daniel Gilbert proposed that the harmful effect of ionizing radiation might be ascribed to oxygen-free radicals. Two years later, Denham Harman argued that the pace of aging could be related to the level of free radicals produced, probably by metals or respiratory complexes. These early studies, insightful as they were, saw free-radical oxidation as a purely random event, causing accumulated damage to nucleic acids, proteins, and lipids. Simply put, they did not consider biochemical specificity. One review article aptly describes the situation: "prior to 1980 no conceptual framework existed to integrate protein oxidation into metabolic regulation or to the aging process." It was in this context that Earl conducted his ground-breaking investigation: "By seeking to understand protein oxidation on a very precise, structural and quantitative level, Stadtman's work has revised the way we think about oxidative damage."

Basic research by Earl and his co-workers also provided an important insight for clinical investigators: just as protein oxidation takes place during the aging process, so it may be involved in many diseases. Now, a growing body of literature supports this view by finding a close correlation between "oxidative stress"—the damaging influence of oxidants on cellular molecules—and the progress of certain diseases, including atherosclerosis, cancer, and age-related ones such as Alzheimer's and Parkinson's.

The two-step mechanism of enzyme degradation

Age-related changes in the amounts of oxidized protein 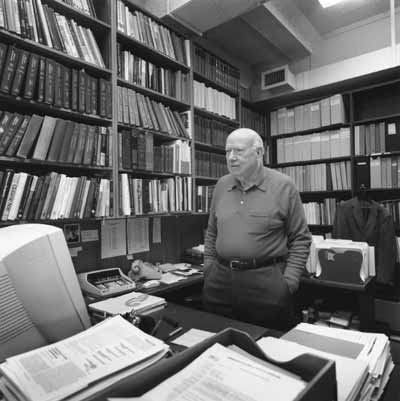