Working on the aerobic degradation of cholesterol in the early 1950s, Thressa set out to produce precursors of steroid hormones and cortisone. Unfortunately, cholesterol was degraded completely by the microorganism, so she could not detect any of the desired intermediate products to be used for hormone production. In the course of this unsuccessful endeavor, however, Thressa was able to identify cholesterol oxidase, an enzyme that oxidizes cholesterol. This enzyme was later used clinically for the measurement of cholesterol levels in blood.

"When I was younger, I always worked in the laboratory on Saturdays and I added a few more samples in the experiments. I used to call these my Saturday specials. Sometimes there was an unexpected discovery that was more important than the original objective."

In the mid-1950s, Thressa returned to a subject more closely related to her graduate work at Berkeley: the study of metabolic systems under strictly anaerobic, oxygen-free conditions. She found an example of anaerobic metabolism in the fermentation of lysine, an amino acid. Lysine was broken down into smaller molecules (acetate, butyrate, and ammonia) in the absence of oxygen, and this degradation was catalyzed by cell-free extracts of C. sticklandii , an anaerobic bacterium she had isolated from San Francisco Bay mud. By looking into which chemical bonds were cleaved in lysine labeled with the radioactive tracer 14C and how the broken pieces were distributed among the radioactive products, Thressa demonstrated that this fermentation process involved two independent metabolic pathways. They turned out to be dependent upon the presence of vitamin B12 . She also examined several other cases of amino acid metabolism. Among them, the reduction of glycine into acetate and ammonia was especially important, because this proved to be an energy-conserving, rather than an energy-consuming, process, linked to the formation of ATP (Adenosine triphosphate), the universal carrier of energy in cells.

While conducting her research on amino acid metabolism, Thressa re-visited the question of how methane gas is produced in oxygen-free conditions. In fact, the production of methane is one of the most commonly observed phenomena in nature. Cows, sheep, and other cud-chewing animals known as ruminants often expel this gas from their mouths. Methane gas is also produced in the black mud of ponds, lakes, and marshes where organic material is undergoing decay. By the time Thressa came back to the study of methane biosynthesis, this subject had attracted much attention from biochemists because of its relationship to another topic—the function of vitamin B12 in living systems.

Vitamin B12 was first isolated in 1948 in a crystalline form. This triggered an intense investigation of its structure by X-ray crystallographers, including Dorothy Hodgkin, a British scientist who finally elucidated the complete structure of this red, cobalt-containing substance in 1955. As well as this structural study, there was also an increasing effort to obtain a large amount of vitamin B12 from natural sources for therapeutic and experimental uses. In the early 1950s, it was found that the sludge remaining in the fermentation tanks of sewage disposal plants had unusually high amounts of vitamin B12 compounds, and that the final fermentation process was carried out almost exclusively by methane-producing, anaerobic bacteria. 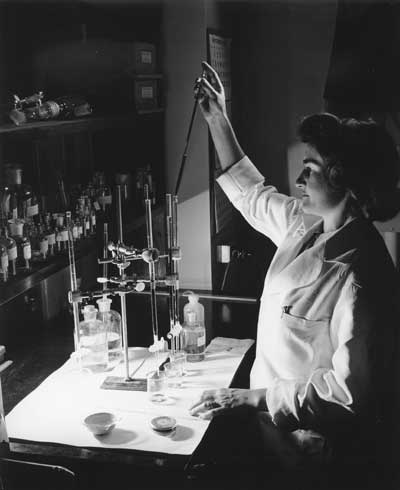 The structure of vitamin B12 coenzyme and its biochemical function

In the late 1950s, by studying the formation of methane by Methanosarcina barkeri and other anaerobic bacteria, Thressa demonstrated that vitamin B12 is involved in the methane-producing process. Furthermore, she explained that the free form of vitamin B12 can function as a methyl group carrier, and that its coenzyme forms serve as hydrogen carriers. This knowledge provided the basis for much of the current understanding of methane biosynthesis. In 1958, another breakthrough in the study of vitamin B12 was made by Horace A. Barker, Thressa's mentor, who discovered the biologically active forms (coenzyme forms) of B12 vitamins while working on the anaerobic metabolism of glutamate. Coenzymes are non-protein molecules that help the catalytic function of enzymes. In the end, Thressa and her co-workers discovered 5 of the 12 known vitamin B12 -dependent enzymes, some of which, as coenzyme forms, function in lysine fermentation.