"My greastest goal is to have one of my own students remember me with the same mixture of devotion and respect with which I remember you (Earl Stadtman)."

"Thressa Stadtman represents the kind of intelligence, determination and commitment which have made her a preeminent figure in world science. She is an example for students everywhere and a role model for all the women scientists."

The NIH intramural research program is well known for its outstanding scientific and medical achievements, but equally important is its role in training biomedical researchers not only from the United States but from around the world.

As mentors of more than hundred scientists, Thressa and Earl are respected for their rigorous training and liberal sharing of credit in publications. Researchers in their laboratory are challenged to defend every new discovery in multiple alternative ways, and they are encouraged to publish papers and assume responsibility at a unusually early stage. Indeed, Thressa and Earl have had a special touch with younger scientists on their way up. Out of their laboratory have come a number of prominent scientists, including two Nobel laureates (Michael Brown and Stanley Prusiner); the CEO of a major pharmaceutical company (P. Roy Vagelos); and about a dozen members of the National Academy of Sciences.

Thressa's and Earl's mentoring was not confined to postdoctoral fellows. Several pre-doctoral researchers in their laboratory received their doctoral degrees from universities near NIH. Earl also extended his teaching activities to the NIH's evening classes, which were first administered by the Graduate School of the United States Department of Agriculture in the 1950s and subsequently by the Foundation for Advanced Education in the Sciences, a non-governmental organization chartered in 1959. Furthermore, Earl enjoyed opportunities to teach in various universities as a visiting professor. 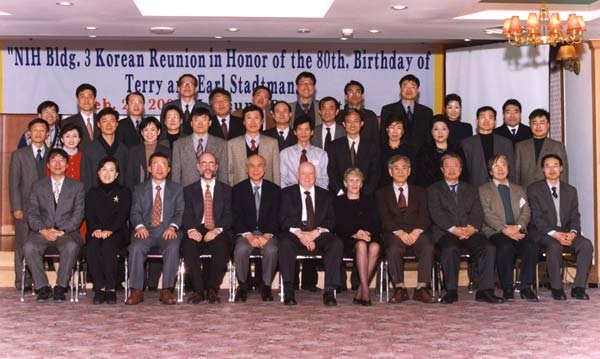 The Stadtmans' influence has spread around the world. Here they pose with the Korean Alumni of Building 3 in 2000. 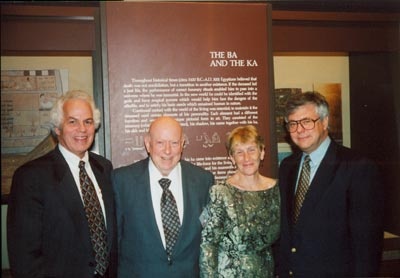 Two Nobel laureates, Michael Brown (right) and Stanley Prusiner, were trained under the Stadtmans in the 1970s.

The 1954 class record of the course "Microbial Biochemistry" at NIH. 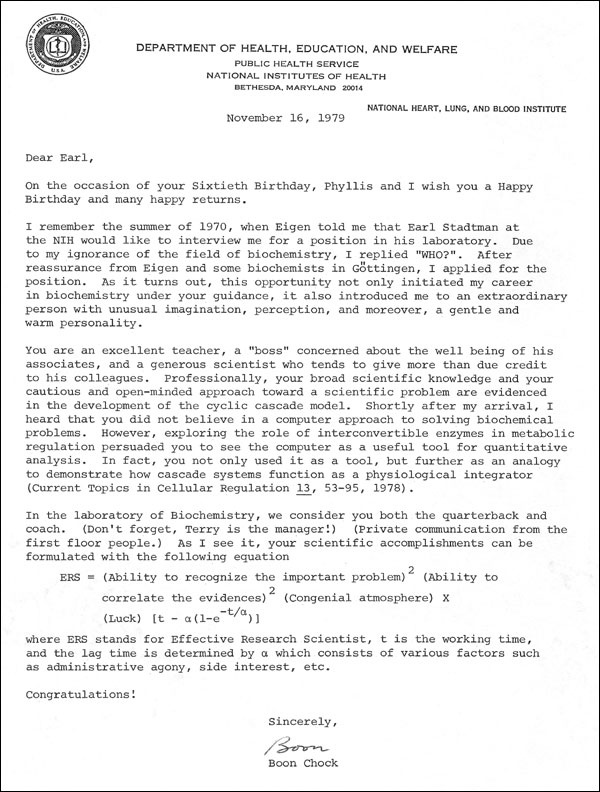 Boon Chock describes the "Stadtman Equation of Success" in a letter to Earl, 1979.