In the early 1970s, Thressa's direction of research was suddenly changed by the unexpected, serendipitous observation that selenium was required for synthesis of a particular protein. At that time, Thressa was examining the biochemical properties of glycine reductase, the enzyme that catalyzes the reductive degradation of glycine, by isolating and purifying its protein components separately. With this study, she sought to explain a seemingly casual, but puzzling, finding in her laboratory: why did some batches of C. sticklandii, grown under conditions deemed to be optimal for the production of glycine reductase, exhibit virtually no ability to reduce glycine to acetate?

In every such instance, the lack of enzymatic activity could be attributed to the absence of one component, called protein A, in the preparation. Finding that this protein component was not continuously produced during the entire phase of growing the bacteria, Thressa began to search for nutrient factors that might help or inhibit the production of protein A. After testing various inorganic minerals, she discovered that the addition of selenium to the bacterial culture medium greatly increased the production of protein A and immediately restored the activity of glycine reductase to its highest level. To determine further whether selenium was an actual component of protein A, Thressa conducted an experiment in which she grew C. sticklandii in a culture medium containing radioactive selenium. This resulted in the incorporation of radioactivity in protein A. By the end of June 1972, Thressa finally had enough evidence to announce the existence of a selenium-containing protein. Protein A of glycine reductase was a selenoprotein!

This diagram illustrates the function of glycine reductase, the enzyme that attracted Thressa's attention in 1972

Selenium was a chemical element discovered in 1817 by the Swedish scientist Jöns Jacob Berzelius (1779-1848). This mineral, existing only in trace amounts in nature, did not receive much attention until the 1930s, when it was identified as a potent toxic substance that was dangerous for cattle and other livestock. While selenium was largely known for its toxic effects, some research articles in the 1950s reported contradictory findings. For example, they showed that dietary intake of selenium helped prevent liver necrosis in rats, protected chickens from exudative diathesis, and prevented a type of muscular dystrophy known as white muscle disease, which was particularly lethal in young animals. These nutritional studies in animals were in fact preceded by an earlier report in 1954 that the activity of formate dehydrogenase, an enzyme produced by bacteria, depended on the addition of selenium to the growth medium. Despite its significance, this finding received little attention at that time.

It was almost two decades later that selenium was actually found to be present in an enzyme. In addition to Thressa's discovery in 1972 that glycine reductase contained selenium, there was a simultaneous demonstration by scientists at the University of Wisconsin that glutathione peroxidase, an enzyme extracted from the red blood cells of animals, also contained selenium that was necessary for its normal catalytic activity. These studies rekindled a general interest in the biochemical investigations of selenium.

In her article for Science in 1974, titled "Selenium Biochemistry," Thressa reviewed previous literature on selenium in diverse areas of study. She also sought to map out a future direction for this budding field. "Proteins containing selenium are essential components of certain bacterial and mammalian enzyme systems," she proclaimed. Yet she also noted that the "form in which selenium occurs in these selenoproteins is unknown." This unsolved problem was to become the subject of intensive research by her over the next two years, and resulted in another important discovery: the selenium-containing molecular part in glycine reductase, which is essential for the biological activity of this enzyme, is selenocysteine. This was a new kind of amino acid, in which selenium takes the place of sulfur in the amino acid cysteine. In other words, Thressa discovered the twenty-first amino acid that occurs normally in protein in addition to the twenty others previously known. Shortly thereafter, other scientists confirmed the existence of this new amino acid by showing that the selenium-containing part in glutathione peroxidase was also selenocysteine. In the late 1980s, Thressa's group at NIH collaborated with August Böch's group in Munich to discover that one of the three stop codons, UGA, is also used as the signal for inserting selenocysteine into a growing polypeptide chain of protein. This discovery helped to establish firmly the acceptance of selenocysteine as the twenty-first amino acid. The researchers also found a new biological intermediate called selenophosphate, which functions as a selenium donor. An enzyme that forms this high-energy selenium compound in bacteria and animals has been the subject of intensive investigation by Thressa.

By 1990, the field of selenium biochemistry had seen much expansion, as evidenced by the large number of attendees at various symposia devoted to the chemical, biochemical, and medical aspects of selenium. Thressa, a tireless leader of the field, has continued to expand her research in several directions, including the discovery of new selenium-containing enzymes and the examination of selenoproteins that do not contain selenocysteine yet have selenium in a different chemical form. She has always been careful in assessing the validity of the various—sometimes controversial—claims about the therapeutic effects of selenium, but without a doubt her fundamental research has brought a better understanding of how selenium is used in the body and why it is an essential nutrient. 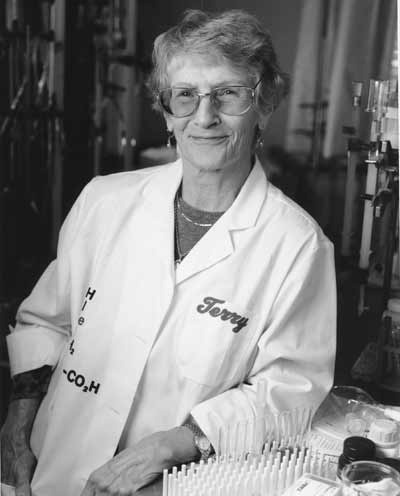