With no official record of married couples who were employed as scientists at NIH, it is difficult to assess the extent, if any, to which the anti-nepotism rules were applied in Bethesda. Some scientific directors and laboratory chiefs, conscious of academic norms and practices, might have had reservations about hiring married couples. But it is certain, at least, that many married couples thrived at NIH. Some notable examples include NIH's first scientific couple, Jerald G. Wooley and Bernice E. Eddy, who married in 1938 when both worked as NIH bacteriologists. Julius and Florence White, who were married in 1932, came to NIH separately: Julius started his work at the National Cancer Institute in 1938, while Florence worked at the Bureau of Home Economics in the Department of Agriculture. In 1942, when Julius had to leave for military duty, Florence moved to NCI and took over his research in the laboratory. After Julius returned in 1945, Florence decided to take a break to stay home with their four children. She eventually returned to NCI in 1958 and resumed her scientific career. John and Elizabeth Weisburger arrived at NCI in 1949, both as research fellows, and worked together in the same laboratory for more than two decades. Within NCI, there were also several other marriages between scientists, technicians, and administrators on campus.

Thressa and Earl, the first scientist couple at the National Heart Institute, were soon joined by other couples looking for employers that did not discriminate against married women. Marjorie Horning found a position at NHI in 1951, where her husband, Evan Horning, had been appointed chief of the Laboratory of the Chemistry of Natural Products; Martha Vaughan arrived from the University of Pennsylvania a year after marrying Jack Orloff in 1951; and Barbara Wright followed her husband, the famed Danish biochemist Herman Kalckar, who had first come to Building 3 in 1953 as a visiting scientist but had stayed on to become an NIH employee. It is interesting to note that all of these women scientists worked in the same room in Anfinsen's laboratory. As Donald Fredrickson recalled: "I got into a room of Thressa Stadtman's because we [the Clinical Associates] were all waiting for the Clinical Center to open. I was there with four women and I thought all the scientists at the NIH were women." This clustering had not so much to do with administrative obstacles as social conventions that made male scientists reluctant to work with female partners, especially their wives. The level of their concern was greatly reduced in 1954 when DeWitt Stetten, Jr., was appointed Associate Director of the National Institute of Arthritis and Metabolic Diseases (NIAMD). He and his wife set a precedent for other NIH couples by working closely together in the same section of the laboratory.

Other notable couples who arrived in the 1950s included the future leaders of NIH, Alan Rabson (Deputy Director of NCI) and Ruth Kirschstein (former Acting Director of NIH). Kirschstein's brilliant career, which included becoming the first woman to head an institute at NIH (she became director of the National Institute of General Medical Sciences in 1974), started when she was a resident physician at the Clinical Center (CC). Subsequently, she worked as a researcher in the Division of Biologics Standards. This would not have been possible if the anti-nepotism rules had been applied in NIH as in academia. 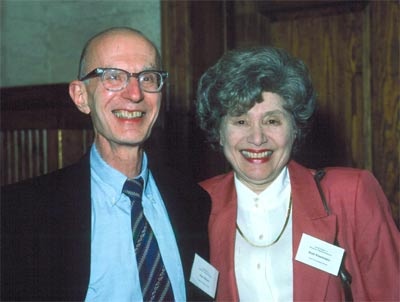