How to Control the Production of Amino Acids?

In 1960, Earl went on sabbatical leave to Europe, and this turned out to be a fruitful research experience. Working in Feodor Lynen's laboratory in Munich for half a year, Earl discovered a biochemical reaction dependent upon the vitamin B12—coenzyme. Subsequently, at the Pasteur Institute in Paris, he collaborated with Georges Cohen and others on investigating the regulation of activities of aspartokinase, the enzyme that catalyzes the conversion of aspartate, an amino acid, to its phosphate derivative. At that time it was well known that this conversion was the first common step in a "branched pathway" that led to the biosynthesis of three different amino acids-lysine, threonine, and methionine.

(A typical example of the branched pathway where A is a precursor for the biosynthesis of three different products, X, Y, and Z. These products may inhibit individually the first common step of A to B).

Earl and his collaborators separated two different kinds of aspartokinase from E. coli extracts and obtained evidence suggesting the existence of still another. They further demonstrated that each one of these multiple enzymes can be regulated individually by a particular product of one of the branches in the pathway.

Since amino acids are the building blocks of protein, they are readily obtained in the process of digesting or degrading protein supplied by foods. But the organism is also capable of synthesizing amino acids from other molecules. For example, bacteria such as E. coli can make the entire basic set of amino acids. Humans can make some of them, which are called " non-essential amino acids," whereas the others that must be supplied in the diet are termed " essential amino acids." When and how many amino acids are to be produced is mainly dependent upon the activity of their biosynthetic enzymes, and the enzymatic activity is often controlled by the final products of the pathway, as seen in the biosynthesis of lysine, threonine, and methionine.

After returning from Europe, Earl resumed his previous research on the metabolism of heterocyclic compounds. This investigation was interrupted in 1963, however, when a postdoctoral fellow, Clifford Woolfolk, joined his laboratory. Although Woolfolk came with a strong desire to follow up Earl's work in Paris on the regulation of aspartokinase, he was advised by Earl to search for another enzyme that could catalyze the first common step in a branched pathway. In 1964, Earl was delighted to find that, among the three candidates Woolfolk suggested, glutamine synthetase was involved in a branched pathway, its activity being regulated by several end products. As Earl later recollected, this "exciting discovery initiated a dramatic change in the focus of much of the research in the Laboratory of Biochemistry and for almost 35 years has occupied the time and energies of numerous highly talented postdoctoral fellows, visiting scientists, and senior associates." It was the beginning of a highly successful, productive research program, in which Earl demonstrated his ingenuity not only as a scientist but also as a leader of many other researchers. 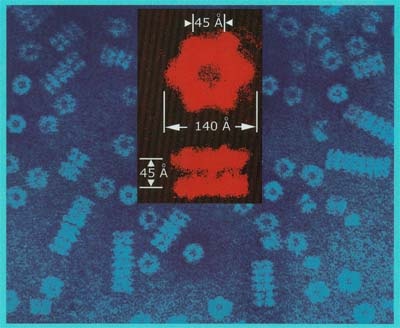 Glutamine synthetase. Because of its fine control system, this enzyme
is nicknamed the "virtual molecular computer" 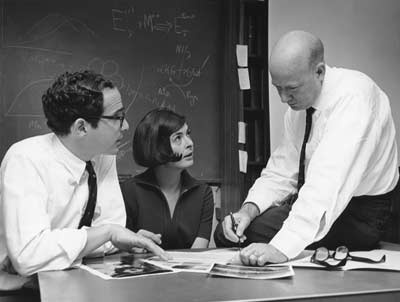 In the late 1960s, Earl and his co-workers were faced with a puzzling problem: a new sample of glutamine synthetase, prepared from extracts of E. coli by the same procedure developed for the previous batch, was insensitive to cumulative feedback inhibition. After an intensive, exhaustive search to explain this, they finally found a mechanism by which the attachment of the molecule called AMP (adenosine monophosphate) to—and also its detachment from—specific sites of glutamine synthetase could dramatically change its susceptibility to feedback inhibition. The previous sample then turned out to be AMP-attached glutamine synthetase, which was very responsive to feedback inhibition, whereas the new preparation was the AMP-detached one. The attachment and detachment of AMP, called "adenylylation" and "deadenylylation," took place through the formation and breakdown of a "covalent" bond (a kind of chemical bond) between AMP and a specific part of glutamine synthetase. And this process was catalyzed by the same enzyme, adenylyl transferase . It was thus an example of "reversible covalent modification ." Earl and his co-workers provided additional evidence for this mechanism with detailed studies of the structure of glutamine synthetase, both the active and inactive forms, by electron microscopy.

Ground-breaking research often creates many unanswered questions. If adenylyl transferase can catalyze both adenylylation and deadenylylation processes, what makes this enzyme tilt the equilibrium of reactions in one direction? What regulates its activity? This question was answered by Michael Brown and Amiel Segal, postdoctoral fellows in Earl's laboratory. Working together, Brown and Segal demonstrated that the ability of a regulatory protein to promote adenylylation and deadenylylation of glutamine synthetase was dictated by the activity of another enzyme, uridylyl transferase. This enzyme was later purified and characterized by Sue Goo Rhee in the laboratory. Depending on the cellular concentration of various metabolites, this enzyme can catalyze the covalent attachment of a uridylyl group ( UMP, uridine monophosphate) to a unique tyrosine residue of the regulatory protein and thereby determine its ability to promote adenylylation or deadenylylation of glutamine synthetase. By the mid-1970s, the scientists were convinced that the activity of glutamine synthetase was controlled by a "cascade system," in which the two systems of reversible covalent modification were tightly linked. Each system was composed of two reversible reactions, or what they called two interconvertible enzyme cycles, the linkage of which resulted in the formation of a "bicyclic cascade system."

In the late 1970s and early 1980s, Earl and Boon Chock carried out a theoretical analysis of the bicyclic cascade system to understand its implications in enzyme regulation. Their work revealed notable advantages of a cyclic cascade system. It amplifies signals and transmits them faster; and it can also sense and respond to continuous changes in the concentration of a number of metabolic intermediates and products. By the time this important theoretical study was finished, Earl had already moved on to another research subject, the regulation of protein degradation.

Video: Boon Chock on the regulation of glutamine synthetase. 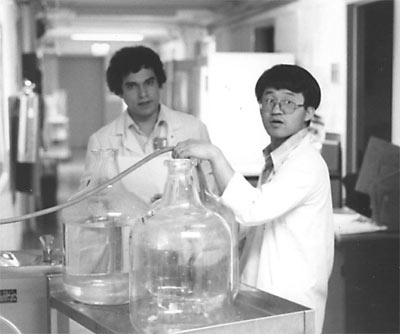 The cyclic cascade system of regulating the activities of glutamine synthetase 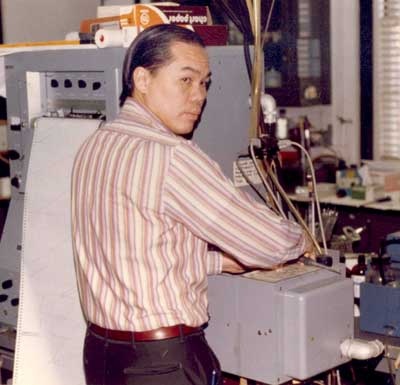 Boon Chock in his laboratory, circa 1980