In 1950, Thressa and Earl looked for academic positions in which they could both work at the same professional level. At that time, however, most universities had anti-nepotism rules that did not allow more than one family member to work in the same department. Intended to protect universities from favoritism, the rules often had the effect of discriminating against married women. No one seriously challenged the rules until the1960s, when the American Association of University Women began to protest their unfairness.

Thressa and Earl's situation illustrates how strictly universities adhered to anti-nepotism policies. In the spring of 1950, Earl was courted by several schools, including Yale, Tufts, and Indiana. The Institute of Radiobiology and Biophysics at the University of Chicago made the most concrete offer of an assistant professorship with an annual salary of $5,000. Earl was particularly attracted to the research opportunity at Chicago, but he felt that he could not accept the offer without securing an equivalent position for his wife. He conveyed his sentiments to T. R. Hogness, Director of the Institute: "If my own future were the only consideration, I would not hesitate to accept your fine offer. However, my decision is complicated by the fact that Mrs. Stadtman is also a scientist and if possible, we would like to get located in an area where she can get a suitable position also." In his reply, Hogness gave the advice that: "If your decision is to be based upon simultaneous academic staff appointments for both you and Mrs. Stadtman, it may mean that you are closing your opportunities for an academic career, since I believe that the policy of the University of Chicago in this regard is no different from that of most other universities." 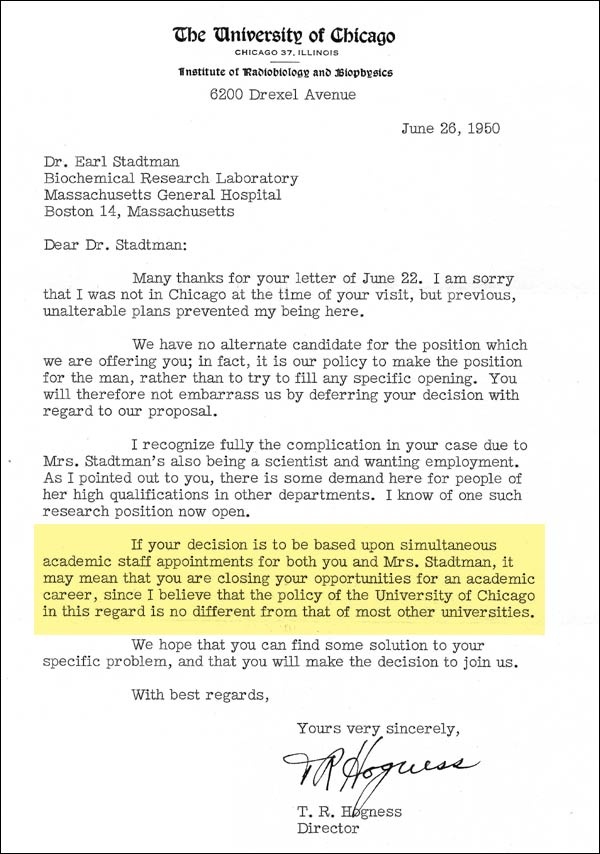 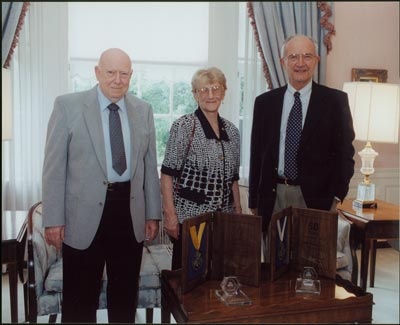 "They are the treasure of NIH," said Claude Lenfant, Director of NHLBI, presenting the Stadtmans with awards for their 50 years of service in 2000