Earl Stadtman was a biochemist who devoted his research career to identifying the mechanisms of cellular energy expenditure and metabolism. He focused his work on anaerobic bacteria, which are microorganisms that thrive in the absence of oxygen. In his postdoctoral position at the Harvard Medical School, Stadtman discovered the role of acyl-CoA derivatives in synthesizing fatty acids and metabolizing two-carbon compounds. He met his future wife, Thressa Campbell, when they were both studying at the University of California at Berkeley and they were married in 1943. At the completion of his post-doctorate in 1950, both he and his wife Thressa joined the then-National Heart Institute (NHI). He started working in the Enzyme Section of the Laboratory of Physiology and Metabolism of the NHI. He was soon named Chief of that Section. In 1962 he rose to Chief of the Laboratory of Biochemistry of what had become the National Heart, Lung, and Blood Institute (NHLBI). In the 1960s and 1970s, he and his coworkers identified the role of the enzyme glutamine synthetase in formation of the amino acid glutamine. He went on to describe the metabolism of anaerobic bacteria. He was the author or co-author of more than 375 scientific papers. Stadtman received numerous awards including in 1979 the National Medal of Science. The National Cancer Institute named a program for new tenure-track investigators the Stadtman Investigators in his honor. He died in 2008 at the age of 88. 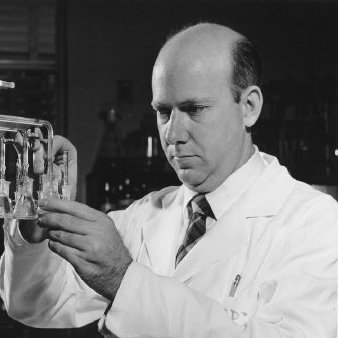