A New Model for Message Transmission: Discovering the Role of GTP

Rodbell knew that a number of different hormones increased cAMP (the second messenger) in his purified fat cells. Together with postdoctoral fellow Lutz Birnbaumer, he discovered that each hormone acts through a specialized receptor, but all hormones stimulate the same adenylyl cyclase (AC) molecule. This has been called the "ping pong ball model."

Rodbell thought it unlikely that so many receptors could interact directly with a single AC molecule. He predicted that there must be a go-between that carries the signal from each receptor to the AC molecule. Rodbell used the word "transducer" for this go-between, using a term from computer science.

To find the transducer that he predicted, Rodbell turned from fat cells to liver cells. Two things made this work possible. First, David Neville, of the National Institute of Mental Health, devised a method for isolating large amounts of liver cell membranes. Second, Rodbell developed a technique for measuring the binding of the hormone glucagon to its receptor in those membranes. With the liver cell membranes and a method to test them in hand, Rodbell and his team (Lutz Birnbaumer, H. Michiel J. Krans, and Stephen L. Pohl) tested the response of the cell membranes to the hormone glucagon. Their experiments proved that a molecule called guanosine triphosphate (GTP) was necessary for the transmission of a message from a glucagon-bound receptor to AC. Although Rodbell did not identify and isolate the transducer, he proved that it existed, was dependent on GTP, and was an integral feature of all receptors that increase the activity of AC. Alfred G. Gilman shared the Nobel Prize with Rodbell for finding the transducer, called the "G-protein."

"It was a period in which my life's experiences had kaleidescoped into a wonderful sense of creativity shared not only with my immediate colleagues but with scientists from all over the world."

Rodbell also developed strong evidence for a second type of transducer—one linked to receptors that inhibit functions within the cell. He accurately predicted that other pairs of transducers and receptors would be found that regulate molecules other than AC. 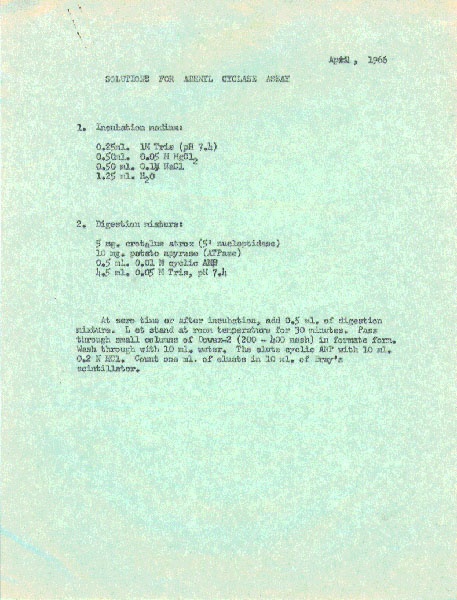 Typed protocol for AC assay  solutions
In April 1966, Rodbell typed this protocol, which describes the first measurements of AC done in his laboratory  Courtesy of Ann Butler Jones 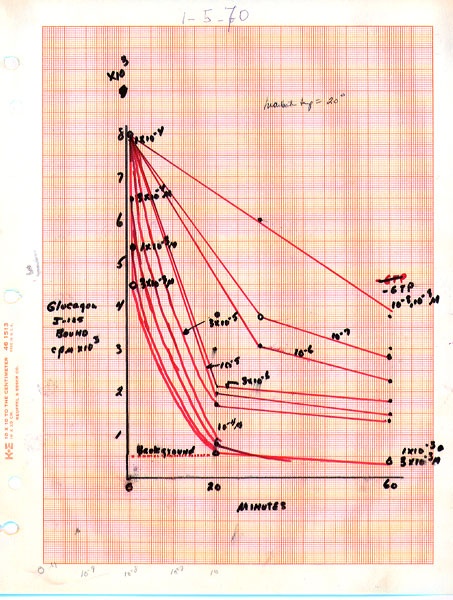 Hand-sketched graph #3
Rodbell drew this graph on January 5, 1970. These results culminated a series of experiments that showed for the first time that hormone receptors were regulated by a transducer that required GTP 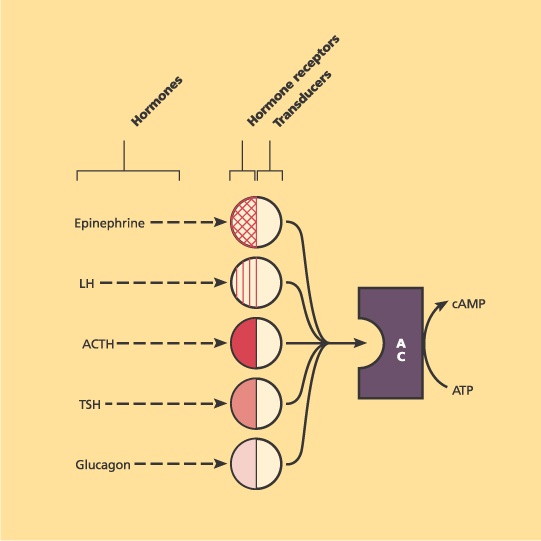 Each hormone acts through a specialized receptor, but all hormones stimulate the same adenylyl cyclase (AC) molecule Courtesy of NIDDK 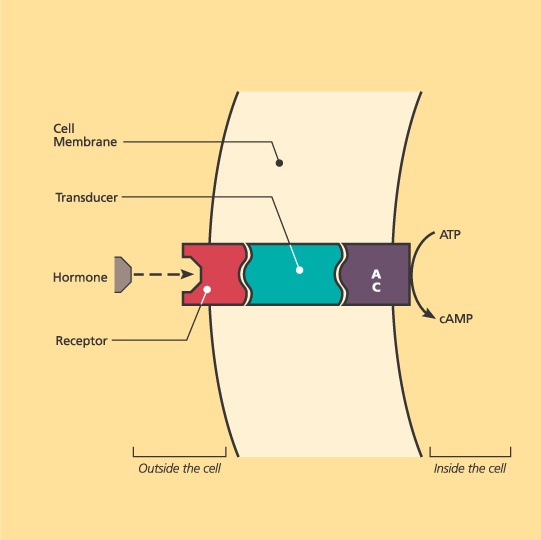 3-Part Transducer Model
Rodbell's model of signal transduction: The signal from the hormone is transduced and amplified inside the cell  Courtesy of NIDDK