"If ye water turns blue, a baby for you! If purple ye see, no baby thar be! If ye test should fail, to a doctor set sail!"

Marge Simpson was not pregnant, but as she took her home pregnancy test she joined dozens of other television women for whom peeing on a stick is a common plot point. How far television has come since Hot Lips’ pregnancy scare forced her M*A*S*H comrades to threaten the life of Radar’s rabbit! In today’s television-world, it is a rite of spring to take a pregnancy test in May, and force America to wait for the season premiere the next fall to learn the results rather than the three minutes it would take in real life. But the test is usually portrayed as simple, no dead rabbits necessary. 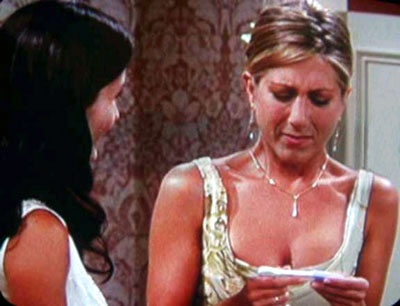 Rachel stares at her positive pregnancy test as her friend Monica looks on, (Friends, 2001)

Perhaps the most culturally significant pregnancy test on television came in May and September of 1991 when Murphy Brown’s 20 tests turned up positive (Episodes 75 & 76, “Uh-Oh”). A year later, when she delivered baby Avery, a national discussion, prompted by Vice President Dan Quayle’s remarks, ensued about single motherhood. However, most television home pregnancy tests reveal more about the characters’ dalliances than national controversies.

Though certainly most characters do not discuss the science behind the home pregnancy test, its very presence on so many different kinds of television shows and movies geared at different audiences hints at its cultural relevance. The pregnancy test is an example of a home healthcare product that is familiar to millions of people. And here’s a hint: If you don’t want people to know you have taken a pregnancy test, don’t leave the kit in the trashcan.

Here are some examples of the pregnancy test in television shows of the past decades. Dates listed are original air dates.

This is certainly not a complete list. If you have other examples, email the Office of NIH History.