The Anesthesiology Section of the newly reorganized Pain Branch was to be an expanded program in the evaluation of drugs for dental anesthesia and analgesia. Edward Driscoll had cut back on his experimental work as he took on new administrative responsibilities in the Dental Institute, but he continued to be an advocate for pain research at NIDR, and for effective alternatives to general anesthesia during oral surgery.

To staff the Anesthesiology Section, Dubner and Driscoll looked for people with expertise in psychology, pharmacology, and neurology, as well as dentistry, and with the skills and background to refine the complex methodologies of clinical trials to evaluate analgesics. 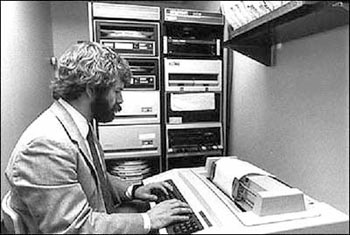 Rick Gracely at the computer

Some Issues in Analgesic Clinical Trials

Clinical trials of analgesics presented special problems both because so little was understood about pain mechanisms and because evaluators had to rely on the subjective report of patients, whose sensory perceptions were often affected by their cognitive and affective, or emotional, responses. [This is the reason why many analgesic trials use the crossover method, so that the test drugs are evaluated in the same patient, each serving "as his own control".]

Richard Gracely, as a psychology graduate student at Brown University, began work on a verbal pain measurement tool that would differentiate the patient's sensory perception of pain intensity from his affective experience of the pain's "unpleasant" quality.

In 1975, Gracely joined the NAB and completed his dissertation work on the Differential Descriptor Scale . This scale can be used to demonstrate, for example, that the narcotic fentanyl decreases the perception of pain intensity, independent of its effects on affective quality; while the tranquilizing drug diazepam decreases the patient's sense of distress, independent of perceived changes in the intensity. Gracely went on to develop several innovative word scales for pain measurement, with collaborators including Patricia McGrath and Donna Kwilocz.

Gracely's work is based on the idea that "You can't just do magnitude measures of pain and really get a lot of meaning out of it unless you anchor the judgment some way....Every word response is an anchor to a subjective level". 1

His research is characterized by the use of multiple internal controls to test the validity of the assessor (the patient); the validity of the internal relationships of the ranking terms; and the sensitivity of the scale to changes under analgesia or other environmental influences. In the initial set of studies, volunteer subjects selected words from two randomly organized lists to describe two different types of noxious stimuli (electrical shock and cold press or); their verbal rankings were further assessed against their analog responses (handgrip and line length) to stimuli. This "cross-modality matching" was a cross-check of both the subjects and the method.

Driscoll had meanwhile been looking for a dentist with the necessary pharmacology training to assess the various new analgesic agents being introduced. How large a dose was needed to prevent pain and what were the side effects? Could they replace general dental anesthesia? This project would become particularly crucial with the demonstration of the opioid receptors in the brain in 1973. Researcher had found that the nervous system released a number of "natural" pain relievers - endorphins and enkephalins - as well as some pain-enhancing chemicals, in response to injury or inflammation. Here were clues to the body's ability to signal or to modulate pain, but how might these substances be activated or blocked by analgesic medications in the clinical setting?

In the mid-1970s, Raymond Dionne conducted trials of ibuprofen at the Medical College of Virginia, using the third molar (wisdom tooth) extraction model developed by Stephen Cooper at Georgetown University. This model is one of the most useful for acute pain studies, for several reasons: the procedure is common and not life-threatening; yet it often causes moderate to severe pain, often accompanied by a high degree of anxiety; and the fact that every patient has four molars creates a built-in crossover control. 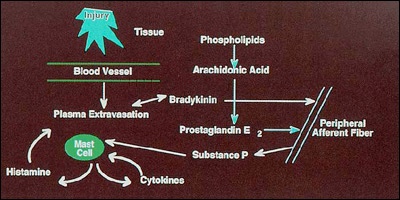 The inflammatory cascade of chemical activity in response to tissue injury. From Raymond Dionne and Sharon Gordon, Prevention of Pain. Compendium of Continuing Education in Dentistry v. 18 (1997): 244.

Dionne gave patients an initial test dose before surgery, then a second dose when the patient requested pain relief postoperatively. Using this protocol, he found that "all the treatments looked alike! Dionne was frustrated until he realized that the outcome he needed to consider was the time of request for the second dose, and the pain level at that point, as the measure of effectiveness of the first dose. His review of the study data confirmed his hunch, showing "a huge difference between the groups" in second-dose request time. But his colleagues refused to believe this new finding, suggesting it was "just retrospective data dredging." 2 So Dionne restarted the study from the beginning and analyzed the data prospectively to establish the truth of his contention.

The revised study became a model for the trial work Dionne has carried out since joining NIDR in 1978, evaluating the effects of premedication and postmedication on patient pain in third molar extractions. His studies, correlating the course of postoperative pain with the "inflammatory cascade" of chemical mediators following tissue injury, have established the effectiveness of preoperative medication with an NSAID such as flurbiprofen, combined with the use of a long-acting local anesthetic, such as etidocaine, as effective pain control in dental surgery.

This approach to dental analgesia was endorsed at an NIH Consensus Development Conference in 1985; however, many oral surgeons continue to use general anesthesia, despite the attendant risks.

The revitalized Anesthesiology Section was planned to be a major component of the new Dental Clinic, which would open at the Clinical Center in 1983. The Board of Scientific Counselors, however, recommended that, as this was the only clinical pain research unit on the NIH campus, its scope be extended beyond dental pain. To head the Clinic, Mitchell Max , a neurologist, was recruited from Memorial Sloan-Kettering Cancer Center, where he had trained with leading pain specialist Kathleen Foley and had studied the pharmacokinetics and pharmacodynamics of opioid drugs with Charles Inturrisi.

Encouraged by Dubner to be innovative, Max developed a trial model to evaluate analgesics in chronic painful nerve disorders, such as diabetic neuropathy and postherpetic neuralgia. These severe neuropathies, unlike some more common ailments such as low back pain, show very little patient variance due to economic or psychological factors.

The suppression of postoperative pain with NSAID (flurbiprofen) and a long-acting local anesthetic (etidocaine). From Raymond Dionne, New approaches to preventing and treating postoperative pain. Journal of the American Dental Association v. 123 (1992): 29.

Collaborating with Gracely, Max employed a crossover trial design; an active placebo, to control for response based on subjective mood improvement; and verbal pain descriptors for the patients to use in keeping their "pain diaries."

One possible new class of analgesics, suggested by the work of Peter Watson in Toronto, were the tricyclic antidepressants, which block the nervous system from reuptake, or reabsorption, of the neurotransmitter norepinephrine (nor-adrenalin). Max's trials of the tricyclics amitriptyline and desipramine "came out very sweetly." He and his colleagues demonstrated that these drugs are effective analgesics in diabetic neuropathy and postherpetic neuralgia; and that their efficacy is independent of their impact on patient mood.

Efficacy of tricyclic antidepressants for relief of neuropathic pain. The suppression of postoperative pain with NSAID (flurbiprofen) and a long-acting local anesthetic (etidocaine). From Raymond Dionne, New approaches to preventing and treating postoperative pain. Journal of the American Dental Association v. 123 (1992): 29.

More recently, the Pain Clinic has evaluated the efficacy of dextromethorphan , a weak morphine derivative, and clonidine , an anti-hypertensive drug, in preventing toxic sensitization of the brain and central nervous system. These drugs act on the nerve cell receptors which respond to specific chemicals involved in pain response. Max describes his studies as "hybrid" trials, in that he seeks both to find useful analgesics and to correlate their action with a clearer understanding of pain mechanisms.

"Clinical trials may be said to be aimed at one of two ideal goals....to establish some biological principle in humans that you could then apply to lots of other things...[or a] pragmatic study, ...just trying to understand what to do for that patient group. I think our aims fall in the middle."