Marshall Nirenberg came to the NIH in 1957 as a postdoctoral fellow in Dr. DeWitt Stetten, Jr.'s laboratory. By the end of the following year he had found his research calling. He decided to concentrate on nucleic acids and protein synthesis, thinking this might lead to something more. He wrote in his research notebook, “would not have to get polynucloetide synthesis very far to break the coding problem. Could crack life's code!” Nirenberg spent the next few years on the first part of his task: creating experiments to show that RNA could trigger protein synthesis. 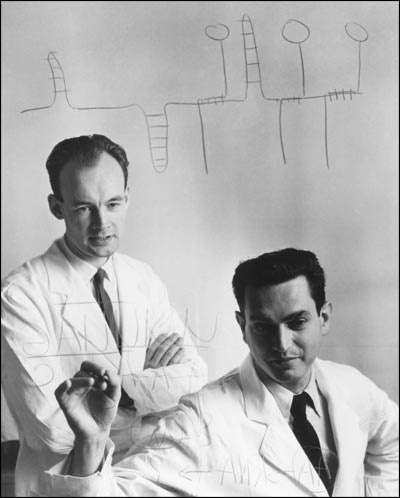 In a laboratory on the seventh floor of Building 10 on the NIH campus in Bethesda, Maryland, Marshall Nirenberg–by now an employee of NIH–and his post doctoral fellow Heinrich Matthaei were hard at work on the coding problem by 1960.

Their experiment required a cell-free system, created when cell walls are ruptured and release their contents. The material inside cells is called cytoplasm, or sap, which can still synthesize protein but only when the correct kind of RNA is added, allowing the scientists to control the experiment. Nirenberg and Matthaei chose E. Coli bacteria cells, and ground them up using a mortar and pestle to release the cytoplasm, or sap, they would use in their experiments. The scientists, working by themselves for the most part, and often late into the night, would use the sap itself to force the creation of a protein.

On Saturday, May 27, 1961, at three o'clock in the morning, Matthaei combined the synthetic RNA made only of uracil (called poly-U) with cell sap derived from E. coli bacteria and added it to each of 20 test tubes. This time the “hot” test tube was phenylalanine. The results were spectacular and simple at the same time: after an hour, the control tubes showed a background level of 70 counts, whereas the hot tube showed 38,000 counts per milligram of protein. The experiment showed that a chain of the repeating bases uracil forced a protein chain made of one repeating amino acid, phenylalanine. The code could be broken! UUU=Phenylalaline was a breakthrough experiment result for Nirenberg and Matthaei.

The two kept their breakthrough a secret from the larger scientific community–though many NIH colleagues knew of it –until they could complete further experiments with other strands of synthetic RNA (Poly-A, for example) and prepare papers for publication. They had solved with an experiment what others had been unable to solve with theoretical explanations and mathematical models.

It was only a few months before the discovery made Nirenberg a celebrity. In August, at the International Congress of Biochemistry in Moscow, he presented his paper to a small group. One of the listening scientists convinced the conference leaders to invite Nirenberg to repeat his performance. Speaking before the assembled congress of more than a thousand people, Nirenberg electrified the scientific community. Within months, his picture appeared in magazines around the world and he was a highly sought-after lecturer.

Nirenberg's method of testing synthetic RNA in a cell-free system was a key technical innovation. However, once this technique for decoding the relationship of mRNA to amino acids was publicly announced in 1961, there was still much work to do before the code was deciphered. The scientists had to determine which bases made up each codon, then determine the sequence of bases in the codons. This represented an enormous amount of work.

At the same time, Nobel laureate Severo Ochoa was busy working on the coding problem in his own laboratory at New York University Medical School. Ochoa had a big staff, and Nirenberg was worried he would not be able to keep up. By the end of 1961, Matthaei had completed his fellowship and moved back to Germany. But NIH came to Nirenberg's side to help. Faced with the possibility of helping the first NIH scientist win a Nobel prize, many NIH scientists put aside their own work to help Nirenberg in deciphering the mRNA codons for amino acids. Dr. DeWitt Stetten, Jr., director of the National Institute of Arthritis and Metabolic Diseases, called this period of collaboration “NIH's finest hour.” All in all, more than 20 people came through Nirenberg's laboratory. He needed scientists at all levels, postdoctoral fellows, and laboratory technicians to assist him in his important work.

One of Nirenberg's many laboratory notebooks 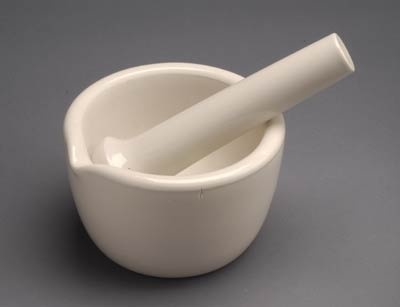 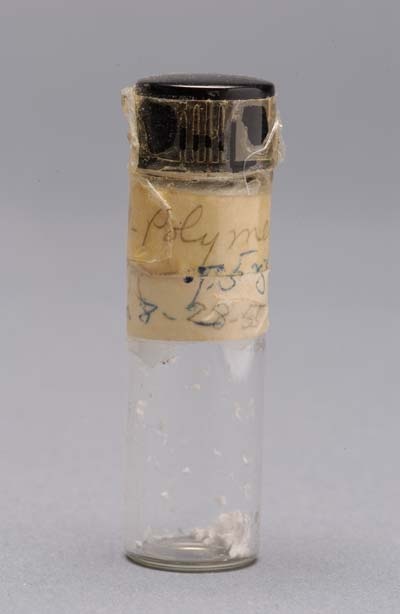 Vial of Poly-U used in the coding experiments 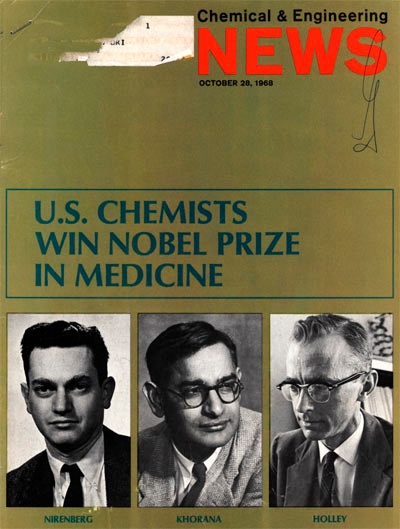 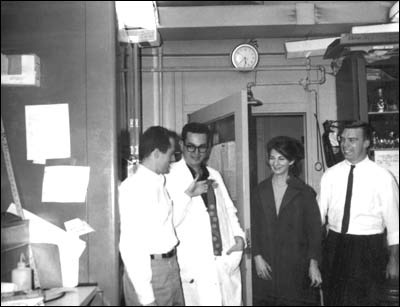 Many NIH scientists, some pictured here, helped with the genetic code research