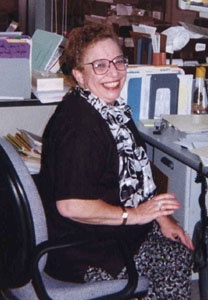 When patients with a perplexing new immunodeficiency disorder began to appear at the NIH Clinical Center in the early 80s, a new nurse on the staff, Barbara Fabian Baird, volunteered to care for them. As one of the first nurses to work with individuals with HIV, she helped develop safety guidelines for AIDS patient care.

In 1983, she became one of the first nurses doing HIV/AIDS research. Dr. Henry Masur hired her to assist with his and Dr. Clifford Lane's AIDS research studies. Besides seeing HIV/AIDS patients in the clinic, she drew blood, performed lab work, managed study data on a computer database, and educated nurses around the country on the care of AIDS patients. Lacking an office for the first two years, she worked out of a cart that she wheeled through the halls. At a time when nurse researchers were uncommon, Ms. Baird was included as an author on many important scientific papers.

“To be on the cutting edge of science, characterizing a new disease and working with brilliant investigators was a fascinating learning experience,” she says. However, the job did come with certain risks. Despite following the guidelines, she was accidentally stuck with needles from AIDS patients three times. Although she was not infected with HIV, one needlestick did leave her with a sub-clinical case of hepatitis.

Ms. Baird continued to work with Dr. Masur as a nurse researcher until she retired from the NIH in 2000. Currently, she is employed as the Director of HIV/AIDS Services for Cobb County in Marietta, Georgia.