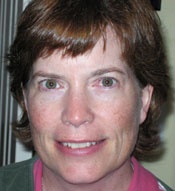 Michele Lyons has been Curator of the DeWitt Stetten, Jr., Museum of Medical Research since 1995, having previously worked at the U.S. Information Agency’s Exhibit Service and the National Building Museum. She received her Master’s Degree in Museum Administration from George Washington University in 1989.

At the NIH Stetten Museum, Ms. Lyons develops physical and virtual exhibits, manages the collection, and creates the social media offerings of the office. Her research interests include science and the National Institutes of Health during the 1930's, and the digitization of instrumentation.

“70 Acres of Science: The National Institutes of Health Moves to Bethesda,” e-book, 2006.

“Careers in Museums: A Variety of Vocations,” American Association of Museums (first edition), 1988.