Early in 1963, NIH chose a board with Tom Sandel as executive secretary to evaluate LINC. The LINC Evaluation Board, with an overall background in biomedical research and computer engineering, was charged with the responsibility of selecting research participants to test LINC's utility in laboratory experiments and to evaluate the 2-year program. In the spring of 1963, NIH published an announcement offering a LINC computer to interested biomedical researchers in return for two commitments: a summer of learning and assembling the LINC, and participation in a project to evaluate LINC as a laboratory tool. From the surprisingly large number of proposals submitted (72), the board selected 12. Even with little knowledge of LINC's capabilities, it was obvious to many researchers that a small, on-line computer in their own labs was a potential boon worth the investment of a summer of tinkering in the suburbs of Boston. 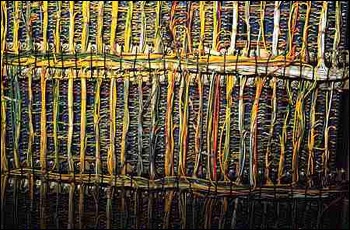 A view of the inside of LINC

At the time, a typical research lab included an assortment of instruments for sensing and recording experimental data. To modify an experiment in progress based on the accumulating results was often impossible or difficult, at best. When researchers had access to a digital computer, it was often a large machine that served an entire university, and direct control of experiments under such conditions was out of the question. Scientists had turned to digital computers almost solely for data analysis. But now, LINC seemed to promise real-time experiment control only dreamed of by some researchers. By this time, anticipating the grants from NIH and NASA, the development team, led by Papian as administrator and Clark as principal design guru, had left Lincoln Laboratory.

Unwilling to abandon work on LINC, they moved to the MIT campus in Cambridge, where they set up the Center Development Office for Computer Technology in the Biomedical Sciences. Clark had been interested in the brain for some time -- he had co authored a paper with Belmont Farley on neural networks and had developed an average response computer, ARC-1, for Mary A.B. Brazier, who worked in MIT's Communications Biophysics Group. Molnar, who to this day maintains a dual identity as a productive engineer and neuroscientist, was working on his Ph.D. in that lab and shared his time between LINC and the neural representation of audition. Thus, LINC was in the hands of computer developers who understood neuroscientific research. On the fourth floor, above a health food distributor, in a space once occupied by a small computer company, the LINC team set up shop to prepare for the eventual laboratory test.

The 12 scientist teams selected by the LINC Evaluation Board were separated into two groups -- the first group to come to Cambridge in July and the second in August. This gave the development team a little more than 2 months to prepare for the arrival of the scientists, to lay out a computer teaching curriculum, to design and order parts, and to plan for the remainder of the program. Small wonder that design changes continued throughout the summer.

Earlier, in 1961 and 1962, the LINC team had offered summer training courses on the basics of computer programming for laboratory applications. They were confident that in ten 8- to 10- hour days they could cover digital computer programming fundamentals. But, the development team decided that no amount of purely academic discussion could prepare the scientists for the realities of computer maintenance and trouble shooting. When Clark and Molnar had discussed the original proposal, Molnar had suggested as a joke that the LINC be assembled by the scientists themselves before it was shipped to their labs. Clark took it seriously. After all, they would have to maintain it. It was a hectic and intense summer. In July 1963, the first group of scientists archived and were immediately launched into 12-hour days of lectures and practical sessions -- a crash course in computer technology (which spilled over into breakfast, lunch, and dinner at the nearby Fox and Tischman restaurant).
Although some of the scientists were complete neophytes in

the then arcane world of computers, most of them learned the programming and circuitry in the 3 1/2 weeks allotted for learning and assembly.

While the research scientists were learning about LINC (which by then was renamed Laboratory Instrument Computer), Clark and the rest of the development team continued to improve the LINC design. Clark was responsible for the overall machine logic, Molnar for the electrical circuits and tape, and Mary Allen Wilkes for the system programming. A steady stream of notes and memos changing the design continued almost "hour by hour," according to Bernard Weiss, one of the research scientists.

The second group arrived in August, benefitting somewhat from the experience of the first, but essentially repeating their experience. By the end of both assembly periods, all groups had working systems. Despite the wide disparity in computer background among the 12 teams, all had become familiar with LINC and understood the computer well enough to go it alone. Within 2 weeks after assembly, the LINC were sitting in their laboratories ready for action and the start of a new era in biomedical research.