What was the LINC and what made it unique? Clark's radical contribution was "architectural"-- with one exception. LINC contained no heroic revolutions in computer circuitry. All the circuits were state-of-the-art, and could have been put together by dozens of other organizations -- if they had but thought of it.

The primary significant hardware innovation was the LINC tape. While at Lincoln Lab, Clark had conceived of a new tape transport and tape function for the TX-2. Ordinary tapes of the day operated with constant speed. Clark suggested that a tape could be designed with constant tension -- which could result in improved reliability.

Thomas Stockebrand, a mechanical engineer at Lincoln Lab, helped design the tape transport -- a monster with 3/4 horsepower motors driving 2500-foot reels on large capstans. When the tape reversed direction, all conversation in the lab stopped -- the noise was often deafening. Each user of the TX-2 "owned" a section of the tape, in a kind of tape condominium. But the tape belonged to the TX-2.

Clark then proposed a radical departure: a "snapshot tape drive" which could record each user's data. With such tapes a user could retain a personal record of his transaction. At Clark's suggestion, Stockebrand designed a prototype tape transport which, ultimately became the LINC tape Clark demonstrated to Waxman.

The beauty of the LINC tape was in its convenience. Tapes were small they could fit in a jacket pocket. Users no longer were tyrannized by an imperious central processing facility which had control over all tape drives. LINC tapes were, in effect, the spiritual ancestor of today's floppy disc. Physically, LINC consisted of a refrigerator-size electronics cabinet and four stereo-amplifier-size modules. The electronics cabinet (functionally equivalent to a car's engine) with the electronics and power supplies, could be placed out of the way in a corner or in an adjacent room. LINC's communicative parts could be set on table or in a standard 19-inch wide laboratory rack (or whatever would suit the researcher's decorative tastes). LINC had to fit comfortably in a crowded lab, since space is usually a problem in biomedical labs. Indeed, LINC could and often did fit into less than 8 square feet of floor space.

The four modules consisted of a control console, which included most of the controls and indicator lights; an oscilloscope module, which could be used to display either letters and numbers or graphical data (it also doubled as a standard laboratory oscilloscope for general electronic maintenance); a terminal module, which acted as a kind of switching patchboard with analog-to-digital converters, and any of a dozen plug-in units for specialized laboratory equipment, and of course, the LINC tape module which could store programs and data.

The LINC Assembly Program (LAP) was written for users, not computer professionals. LAP made it fairly easy to program LINC for biomedical experiments and, in its last version, was sufficiently flexible to allow for word processing. As William Calvin, a neuroscientist at the University of Washington, wrote in a 1982 issue of BYTE magazine, "I have yet to see a statistics-and-plotting package for microcomputers which equals LINDSY for the LINC, and the LINC's text editor and operating system (LAP) puts CP/M [a widely used system] to shame."

When a scientist sat down at the LINC keyboard, he had at his disposal a complete and comprehensible computer system. He could create a program and execute it in one sitting. Perhaps most elegantly, as the data were displayed an experiment could be "tuned" instantly by turning a knob hooked to an analog-to-digital converter. As Gordon Bell, director of the Computer Museum said, "LINC was the world's first personal computer." What sixth graders now take for granted was a remarkable achievement which led recently to a "computer pioneer" award to Clark-by the IEEE (Institute of Electrical and Electronic Engineers). They, too, acknowledged Clark as the "designer of the first personal computer." 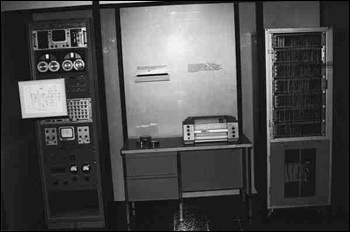 LINC with its four modules consisted of a control console, oscilloscope module, a terminal module, equipment, and, the LINC tape module which could store programs and data.