Meanwhile, down in Bethesda, Maryland, the Director of the National Institutes of Health, James Shannon, had named a group, at the suggestion of the National Academy of Sciences, to recommend how NIH could use computer technology to enhance biomedical research. Shannon charged the group, called the "Advisory Committee on Computers in Research," to bring NIH into the modern computer world.

At the urging of Mary A.B. Brazier, a neurophysiologist at MIT, one of the consultants was Bill Papian, who took it on himself to educate the committee's executive secretary, Bruce Waxman of NIH, on the "cutting edge" of computer technology. Soon after Waxman was named, Papian invited him to Lincoln Lab to show off the TX-0, TX-2, and the exciting work going on in new memory development. Waxman was impressed, especially after his frustrating programming contact with the inflexible computers at NIH. After the laboratory tour, Papian and Waxman entered Papian's office to see what looked like a Rube Goldberg assemblage of electronic packages on the window sill and, on the table, a tape drive with midget tapes. The electronic packages were DEC system modules, but the tape drive was obviously a new creature. Standing at the table, a lab staffer sang "Happy Birthday" to Papian, offering the tape as a birthday present. The singer was Wes Clark and the electromechanical assemblage was the first prototype of a complete LINC system. Clark, with the flair of a showman, grabbed an ash tray overflowing with ashes and cigarette butts and poured the contents on the tape's read head. Even after several minutes of such abuse, the tape continued to operate with only two or three errors.

Waxman was impressed with the tape unit's obvious reliability compared with the finicky tapes at NIH. But, he hadn't yet seen LINC in action as a research tool.

A short time later, Clark and Molnar arrived at Livingston's lab with two suitcases of equipment. After tea, Livingston suggested they set up the machine in Arnold Starr's lab. Starr had been trying to record electrophysiologically how cats hear. However, movement of the ear membrane created electrical noise which drowned out the neural responses, and Starr could not figure out how to listen in on the neural whispers with all the unwanted internal racket created by the membrane.

Clark and Molnar set up LINC and in a short time it was ready to go. They hooked up the electrode amplifier to LINC and, in two hours, Starr could see what had eluded him for many months. Livingston said recently, "It was such a triumph that we danced a jig right there around the equipment. No human being had ever been able to see what we had just witnessed. It was as if we had an opportunity to ski down a virgin snow field of a previously undiscovered mountain."

When Waxman heard of the demonstration in Starr's lab, he became convinced that a cheap, reliable, easy-to-use computer was just what biomedical research needed.

Bruce Waxman was able to get about $400,000 from Fred Stone of the NIH Division of Research Facilities and Resources and had to turn elsewhere for the remainder. Since LINC was so obviously useful for neuroscientific applications, Waxman asked Philip Sapir and Louis Wienckowski, who were administering the NIMH extramural research program, to help support an evaluation of LINC's utility in the lab. Sapir, who had a history of supporting successful innovations, was enthusiastic about LINC's prospects and came up with another $300,000. Still quite a bit short. Clark suggested that Waxman contact Orr Reynolds at NASA, who had once been at the Office of Naval Research, which had supported computer development at Lincoln Lab since the days of Whirlwind, the first large defense oriented computer. Reynolds, newly appointed as director of bioscience programs at NASA, was interested in an automated biological laboratory to search for extraterrestrial life, especially on the planet Mars. He saw LINC as an opportunity to support NASA's mission. So, NASA pitched in another $700,000. The project was "go." 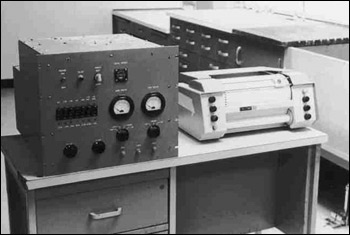