Historic American Buildings Survey (HABS) Level 2 documentation of Building 29 at the National Institutes of Health (NIH) is part of the efforts to mitigate the adverse effects of the planned demolition of the building, in accordance with a Memorandum of Agreement (MOA) between the NIH and the State Historic Preservation Office, the Maryland Historical Trust (MHT). Building 29 is nationally significant to the history of medicine and public health. It was there that the NIH and then FDA staff helped to conquer some of the deadliest infectious diseases. In their regulatory role they had the national responsibility to license vaccines, antitoxins, blood products, and other biologics to ensure their safety and effectiveness. To support this mission, they did scientific research which resulted in the development of important standards and even new vaccines. Building 29 was completed in 1960, designed by local architect Ted Englehardt, AIA. The text below is excerpted from the HABS historical data form for Building 29. The fieldwork was completed July 12–14, 2021 and the below descriptions were what was documented at the time of that survey.

While some of the HABS photos are featured here, all of them can be viewed in the Building 29 Photo Gallery. 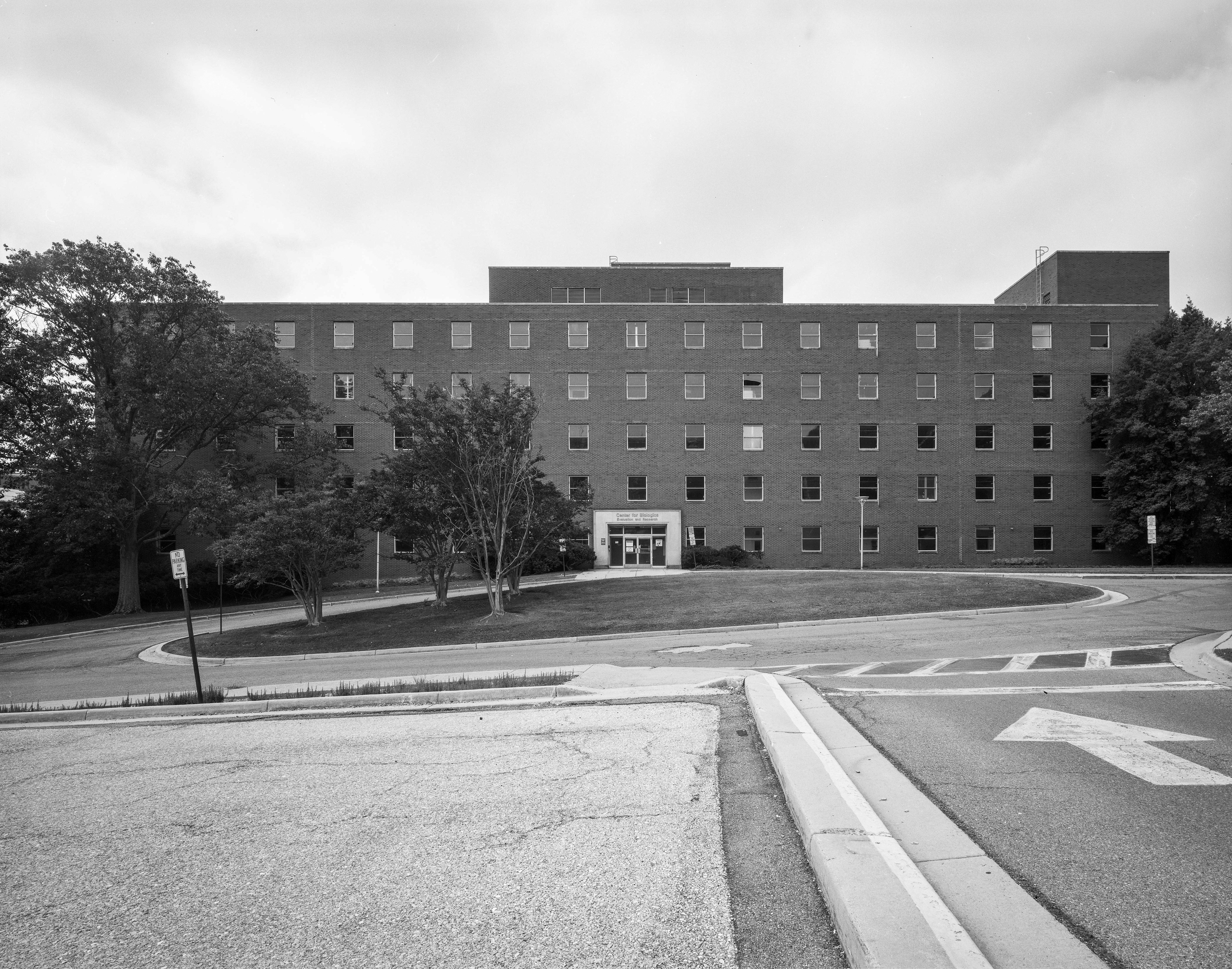 The architectural character of Building 29 is a move away from the original Georgian Revival core of the NIH campus and a strong emphasis on utility, economy, and functionality, resulting in a lack of architectural detail and ornament. This was common for government and institutional buildings in the early 1960s and reflected the tight budgets and timelines for construction.

The exterior of Building 29 is remarkably intact, including brick veneer, limestone cap, and original windows and doors. The interior of the building is less so, due to the changing needs of scientists over a 59-year period and due to the asbestos abatement, which included removal of some original materials. 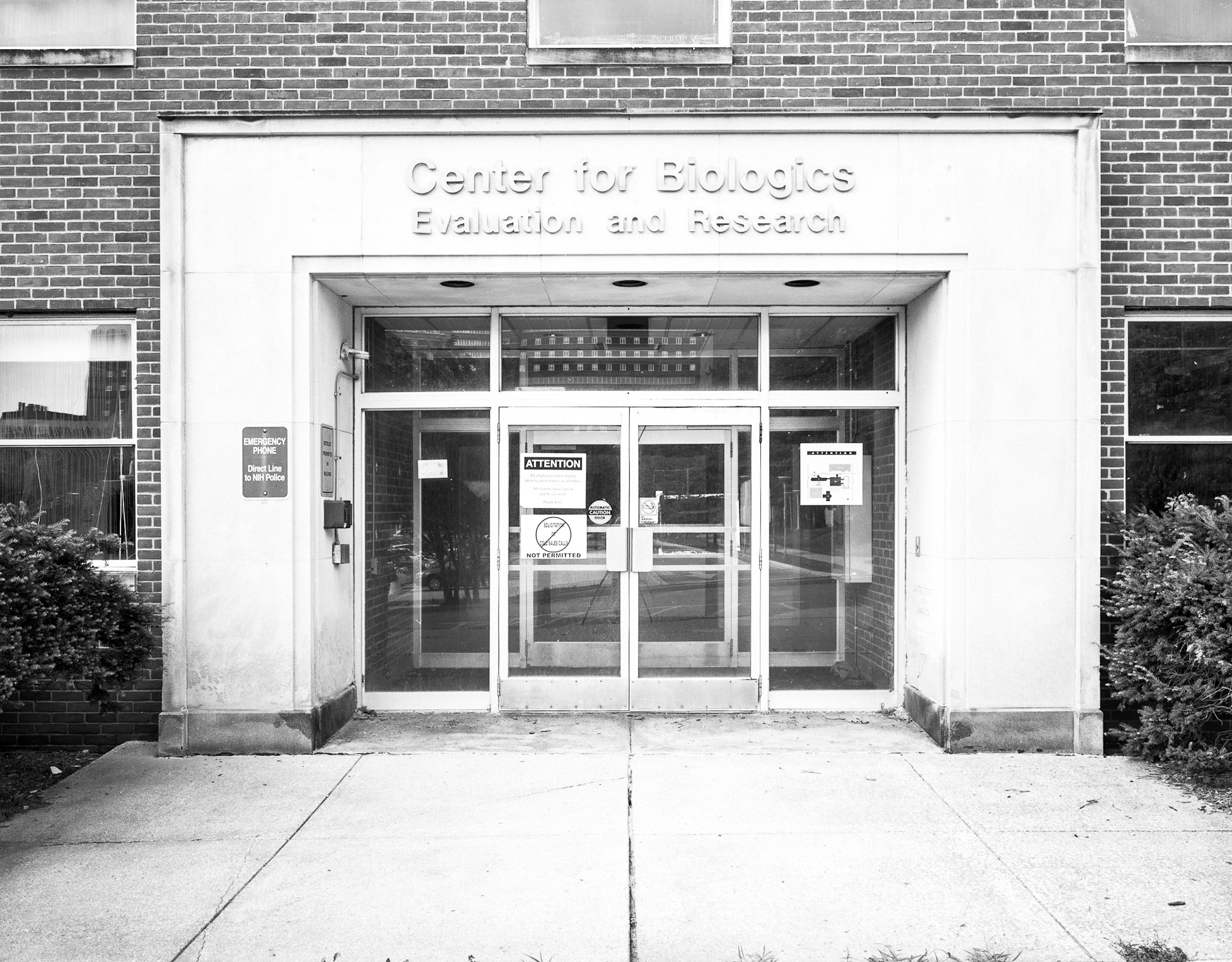 Building 29 Primary Entrance Rob Tucher Photography
Building 29 has a center hallway on each floor, with laboratories and offices on each side, separated in some cases by movable partitions.

There is a central stairway located adjacent to the central elevator, and then one stairway at each end of the building (the east and west façades), providing access to all 5 floors. Stairwell # 2 is the staircase off the Lobby and Vestibule and had higher finishes reflecting its location closest to the public access. Stairwell #1 is located at the east end of the building and Stairwell # 3 is located at the west end. Basement access is available in all three stairwells; however, rooftop (penthouse) access is only available in Stairwells # 2 and 3.

Much of the flooring was removed during asbestos abatement, so most flooring seen today are the simply the cement that was underneath other materials, likely replaced several times during the building’s 59-year lifespan. There are a few rooms left today with patterned linoleum and some with brown quarry tile. Construction drawings called for terrazzo in the lobby and vestibule on the first floor and in stairwell no. 2 landings, platforms, and treads. The laboratory spaces, mechanical spaces, glassware storage, and cage-washing rooms had floors of cement with seal hardener. Linoleum floors in a light grey color were used in the sterile rooms and the vestibules to the sterile rooms. Quarry tile was used in the bathrooms. Asphalt tile was used in the Canteen and in the Library/Conference Room on the first floor.

Some of the wall and ceiling materials were removed or demolished during asbestos abatement. What remains includes grey tile walls and drop ceilings. Construction drawing specifications called for acoustical tile ceilings with a perforated metal frame with glass fiber pad. In places where acoustical tile was to be applied/adhered to a concrete ceiling, a mineral-type fissured surface acoustical tile was used. The Library/Conference Room on the first floor still retains its original solid wood American walnut base, blackboard trim, and picture molding. The room also features black walnut veneer wainscotting and rubber molded base molding. Most of the original ceilings in Building 29 were designed to be exposed concrete that was painted. It is likely that over the years as spaces changed, additional drop ceilings/acoustical ceiling tiles may have been added.

Many doors have been removed from the interior of Building 29, likely during the asbestos abatement or removal of scientific equipment in 2014. Construction drawing specifications called for hollow metal doors in most rooms, and some of these do remain in place. The lobby and vestibule doors on the first floor are aluminum-framed fully-glazed doors.

Some original hardware remains in the building, including some hinges and door and window hardware such as handles and window locks.

The original mechanical design included no recirculation of air, and all air was triple-filtered. Sterile rooms had their own exhaust systems that incinerated the air. Fume hoods could be installed in any room without any additional work needed. The sub-basement and the penthouse/rooftop provided room for HVAC equipment. Some of this equipment has likely been upgraded over the years as technology evolved, including the known HVAC modifications in 1991.

Due to the layout of Building 29, with a central hallway and laboratories on each side, there is good natural light in the rooms on floors 1–5. The basement and mechanical sub-basement are quite dark. All spaces were supplied with overhead lighting originally, but it is likely that many of these fixtures have been replaced over time. Possible original metal light fixtures were seen in the ceilings of the bathrooms on the 3rd floor, and in rooms 332, 413, and 520. It is likely other originals may still exist in additional rooms.

Bathrooms were located near Stairwell #2 on each floor of Building 29 and required plumbing and fixtures (all of which have since been removed). Each laboratory space would also require sinks, sterile hoods, fume hoods, and other equipment to maintain a safe, sterilized working environment. There are construction drawings for several types of sinks, fume hoods, sterile hoods, tissue culture cabinets, and faucets on file at the NIH. 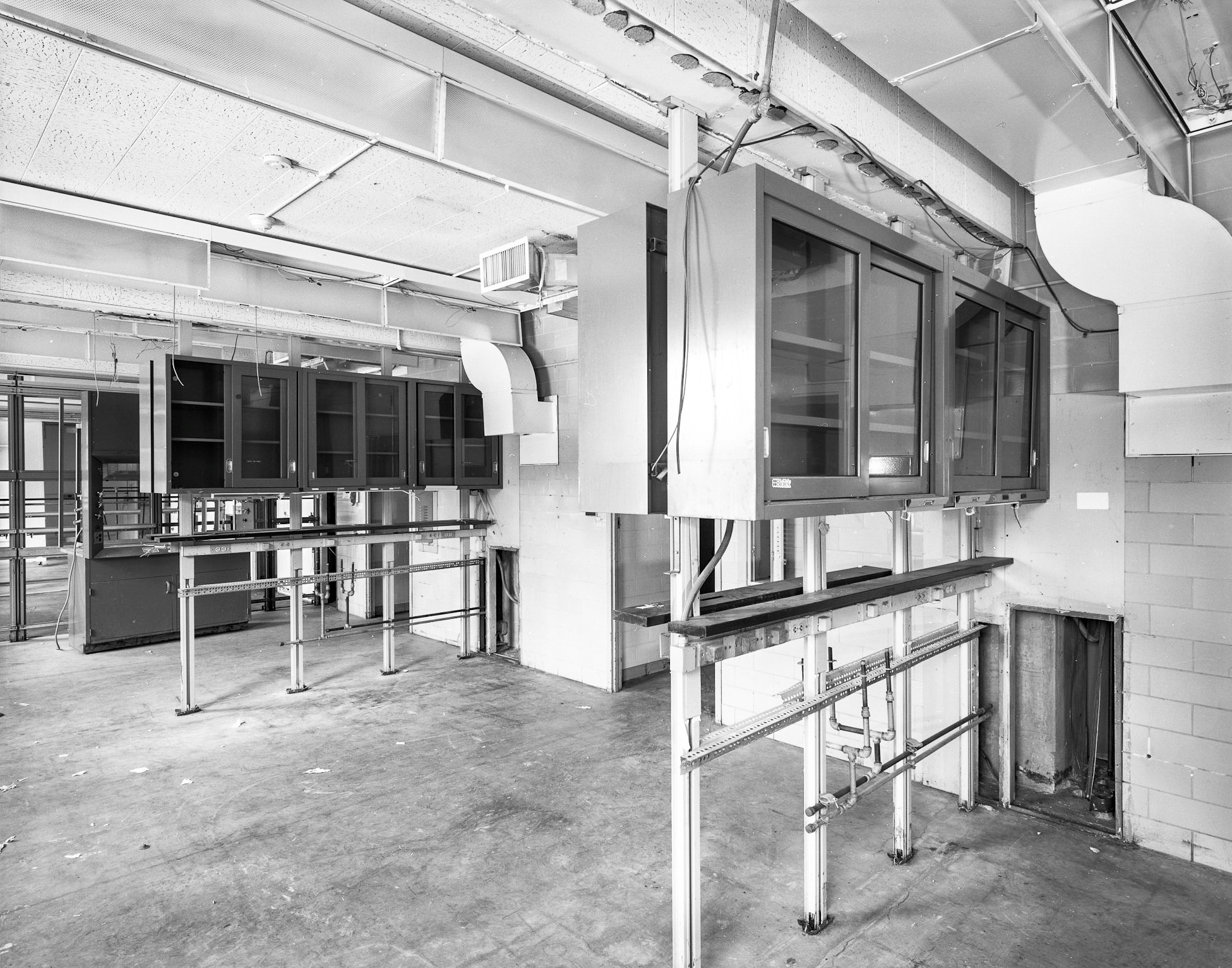 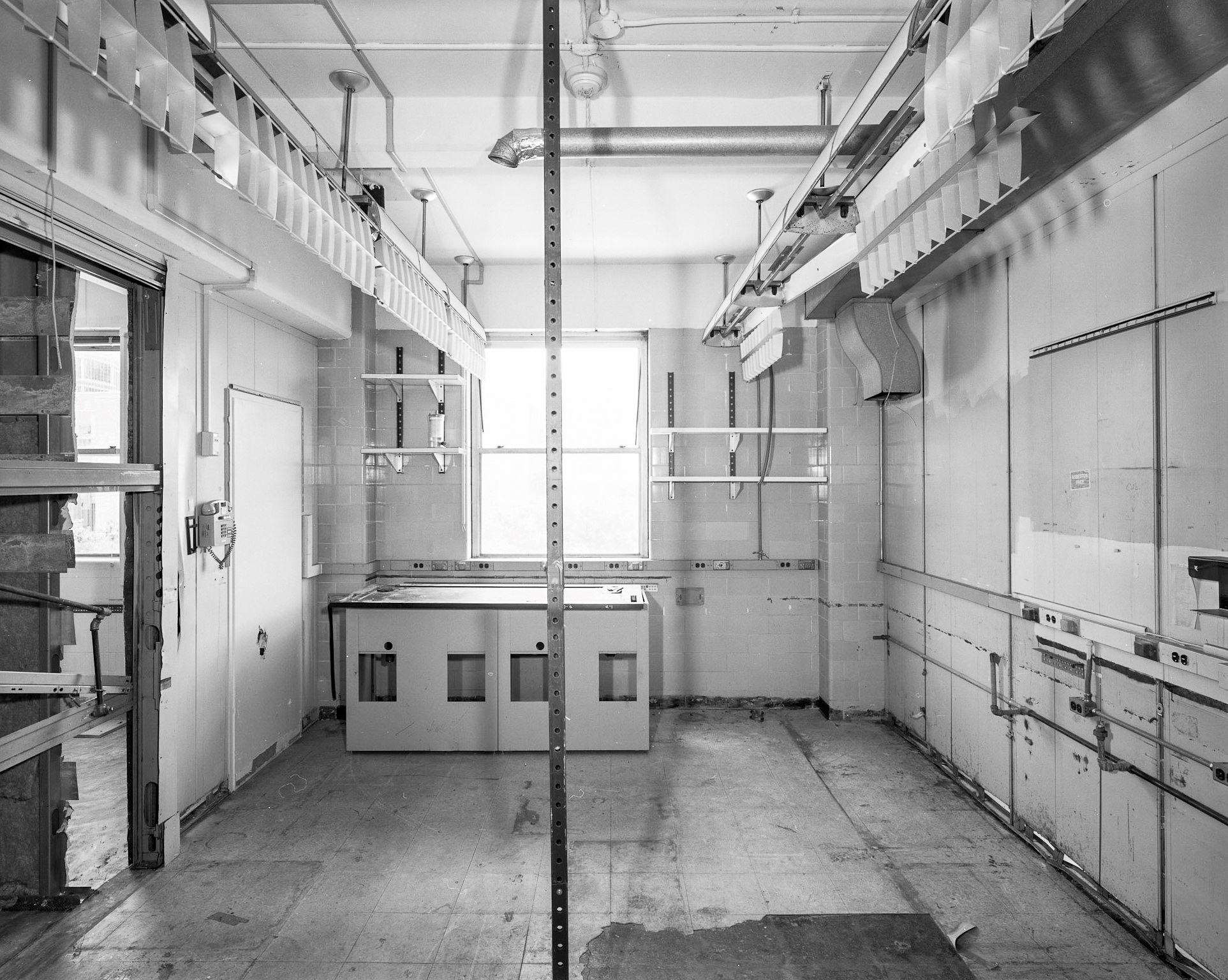