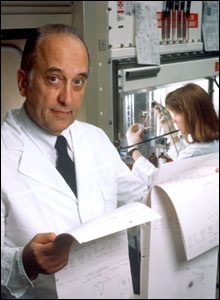 In this context, we received a referral to the NIH, in June of 1981, of a patient D who, as we shall discuss, turned out to be the first patient seen at NIH with AIDS. To set the stage historically, I believe that the report from the Centers for Disease Control [CDC] concerning five homosexual men with a new immunodeficiency associated with Pneumocystis [carinii] pneumonia [PCP] appeared in the last week of May or the first week of June 1981. But on referral of our patient, that had not been reported. We were not aware of this unreported condition. The patient, unknown to his family, to us, or to the referring physicians, was a thirty-five year old homosexual man who had been living in New York. He had a particular partner but many other partners as well within the gay community. He had been healthy with the exception of an array of venereal diseases, including syphilis and gonorrhea on a number of occasions, but then he began having lassitude and weakness in February 1981. Weight loss and fever ensued, and he was admitted in April 1981 to the Hartford Hospital where he had Pneumocystis carinii pneumonia, lymphocytopenia, cytomegalovirus [CMV] in the blood and urine, herpes simplex II perianaly, Candida esophagitis, and Mycobacterium avium tuberculosis of the lung, bone marrow, and esophagus. Initially, he was not as ill as you might have suspected from this history. We were presented with an individual who, we felt, would be unable to make T cells.