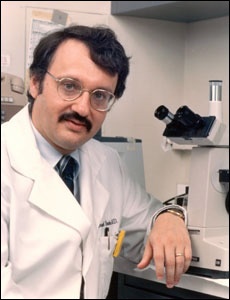 Like many other physician-researchers at the NIH, Dr. Samuel Broder helped drive early AIDS research by taking observations from the clinic and moving them into the laboratory. “The people who founded what is the modern version of the NIH took great pains to locate [research] laboratories in juxtaposition to a hospital ward or clinic,” says Dr. Broder. The combination allows clinicians to see patients and walk a few steps to exchange tissue or blood samples, providing an environment for a free flow of ideas between basic and clinical researchers.

As a National Cancer Institute scientist and later as the Institute director, Dr. Broder believes the NIH was uniquely positioned to address the early questions of AIDS, since the disease appeared in the hospital several years before the virus was discovered and studied.

He also recalls the critical role NCI played in addressing an infectious disease emergency. At the beginning of the AIDS epidemic, NCI dedicated resources to identifying the cause and quickly developing drugs to treat the disease. At the time, NCI was “the only group at the NIH that actually had become a ‘pharmaceutical company’ working for the public in difficult areas where the private sector either could not or would not make a commitment,” Dr. Broder explains. The Institute had already developed AZT as a possible cancer drug, and Dr. Broder’s group moved quickly to investigate AZT and other agents for treating AIDS. “AZT laid the foundation for almost every other product because … the failure of AZT would have had very dramatic effects” on future drug research.