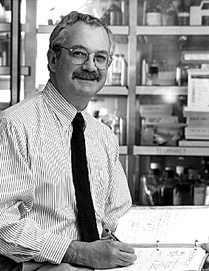 Dr. Robert Yarchoan played a major role in discovering and developing effective therapies against AIDS. In 1984, he joined Dr. Samuel Broder to work in the National Cancer Institute's newly formed AIDS therapy program. Along with Drs. Broder and Hiroaki Mitsuya, Yarchoan conducted the initial clinical testing of many anti-HIV drugs, including AZT and ddI.

“We had one patient who really made an impression,” Dr. Yarchoan recalls. “A nurse from New York had gotten AIDS through a blood transfusion and had a horrible fungal infection of her fingernail. Her nail was quite ratty. When we gave her AZT, the infection cleared up, and you could see where the normal nail was starting to grow. That was very dramatic for us.”

As more information about HIV came in during the early years of the outbreak, Dr. Yarchoan also remembers the shock of realizing “there were half a million to a million people infected with this lethal virus who did not know it. There was this weird feeling of having this cataclysmic information that the world was not aware of.”

Dr. Yarchoan is currently the chief of NCI's HIV and AIDS Malignancy Branch, where he continues to conduct research and develop novel therapies for HIV infection and AIDS-related cancers.