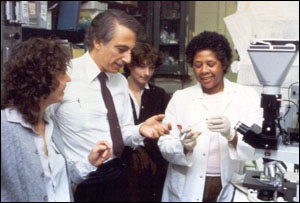 I could not conceive of any other data that we would need in order to say that the virus was the cause of AIDS. What other data were there? To try putting it into an animal and seeing if the animal got AIDS? Something that many people do not appreciate is that viruses are often species specific. In fact, they usually are. Sometimes you get the right result. Take gibbon ape leukemia virus. You can put it in a young gibbon and it produces leukemia, and so everything seems to fit fine; but if you are a human, you cannot put the virus in a human so you go into another species. If gibbon ape leukemia virus is put into another monkey, it does not infect at all or, if it does, it does not produce leukemia. On the contrary, Herpes saimiri in its native species produces nothing. But if you put it into some other monkey–I cannot remember the type–you can produce a lymphoma. Doing that kind of experiment–putting a virus into another species–is not necessarily meaningful and many people do not understand that about viruses. I did not see what else could be done. What else was there to do to establish etiology until you saw more people dying? We felt that the blood test was, in fact, an emergency, and to say that this was the etiology of AIDS was the right thing, and that it was urgent to do so.