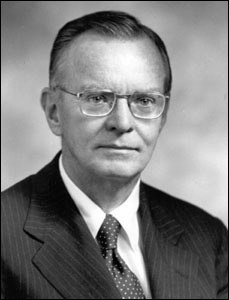 Dr. Richard Krause was director of the National Institute of Allergy and Infectious Diseases when AIDS burst onto the scene, but his studies of infectious diseases had begun decades earlier when he was a 19-year-old U.S. Army medic during World War II. There, during a four-month stint in a venereal disease control program, Dr. Krause first began to appreciate the range of efforts required to prevent and treat infectious diseases. During a year’s leave of absence while in medical school, he worked with the late Dr. Charles H. Rammelkamp on the epidemiology of streptococcal infections and rheumatic fever. He gleaned from this experience the conviction that infection and immunity were opposite sides of the same coin.

Bringing a broad background in microbiology and immunology from his 20 years at Rockefeller University, Dr. Krause took over NIAID’s reins in 1975. He remembers the feeling of many then was, “Now that we’ve conquered infectious diseases, and we don’t have to worry about them any longer, we’ll worry about heart disease and cancer and so forth.” Dr. Krause argued against this lack of concern, and struggled successfully to build the Institute to the level needed to confront future infectious epidemics.

In 1982, he published The Restless Tide, a book that predicted we would not see an end to infectious diseases in humans. He completed the book in 1980, and his foresight would prove frighteningly accurate as AIDS emerged one year later.

Dr. Krause recalls the years leading up to the appearance of AIDS and the steps taken by NIAID to understand and mobilize against the new infectious threat. He is currently a senior investigator at NIAID and a senior scientific advisor at the Fogarty International Center at NIH.