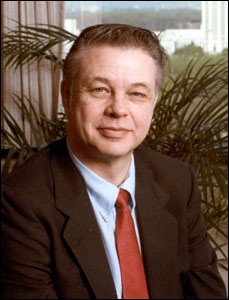 Dr. Kenneth Sell was among the first to recognize the early threat of AIDS. As scientific director of the National Institute of Allergy and Infectious Diseases in the early 80s, he quickly allocated researchers and resources to fight this disease.

“We made the decision to look for every viral and bacterial infectious agent that we possibly could,” he said. “We used every kind of technique and culture method we could trying to isolate the culprit.” Dr. Sell started a program to gather blood and other bodily fluid samples from people with AIDS in order to store them for research.

Some people have criticized government scientists for not responding quickly enough to AIDS. Dr. Sell disagreed. “Our understanding of the disease, the agent, and the epidemiology developed more rapidly than any other new infection in the history of biomedical sciences,” he said. “Furthermore, I never saw anyone refraining from the pursuit of this scientific investigation because they thought that the people at risk weren't worth studying. This is another claim that's made sometimes.”

Dr. Sell left the NIAID in 1985 to head the Winship Cancer Center at the Emory University School of Medicine. He died on October 17, 1996.