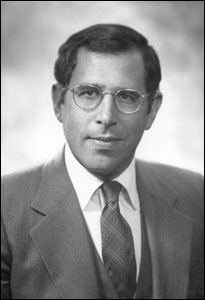 Back in 1971, when Dr. John I. Gallin came to the National Institute of Allergy and Infectious Diseases, some scientists believed that all the important problems in infectious diseases had been solved by antibiotics. But Dr. Gallin subscribed to the idea that outbreaks of new infectious diseases were inevitable. That idea was proven correct by the emergence of AIDS.

Dr. Gallin studied how white blood cells known as phagocytic cells–our first line of defense against infection–moved out of the bloodstream and into the surrounding tissue to fight infectious agents. He made important contributions to understanding chronic granulomatous disease, a phagocyte disorder. During the early 80s, he studied phagocytic cells in some of the first AIDS patients to come to the NIH Clinical Center. In 1985, he became NIAID scientific director, succeeding Dr. Kenneth Sell, and in that position coordinated NIAID's on-campus fight against AIDS.

In 1986, when Congress dramatically increased funding to study AIDS, it was Dr. Gallin who oversaw how the money was spent. He helped initiate or was involved in many important projects and programs, including the international effort to study AIDS in Zaire, known as Projet SIDA; the creation of the first AIDS clinic at the NIH Clinical Center; and the development of a monkey model for HIV disease.