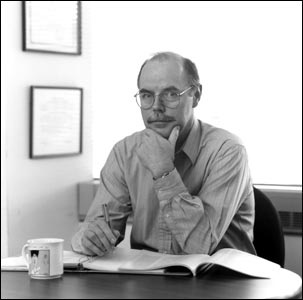 Dr. James Goedert came to NIH in 1980 as a medical staff fellow in the Environmental Epidemiology Branch of the NCI to work in cancer epidemiology. Through a family connection, in 1981 he became involved in the diagnosis and treatment of what was then an unusual case of a young man with Kaposi's sarcoma and this changed his career. His early work related to AIDS for NIH was an investigation of immune system abnormalities in the gay community in New York City. What was a pilot study turned into a long-term project analyzing what factors determine how and when those infected with HIV develop AIDS. This research continued through 1999.

Initially leaning towards environmental causes of AIDS, such as amyl nitrite use, Dr. Goedert recognized clearly the infectious nature of the syndrome when the early cases in hemophiliacs were reported in 1982. He quickly developed a research project in collaboration with Dr. Elaine Eyster at Pennsylvania State University in Hershey to investigate the scope of the problem and the sources of the infection. This research also turned into an NIH supported long-term multi-center study of hemophiliacs with AIDS in the United States and Europe.

A particular research interest of Dr. Goedert's has been the study of twins that are born to HIV-infected mothers in order to determine when infection in the children occurs. Again, a small initial study became a worldwide investigation of over 200 pairs of twins. For this work, Dr. Goedert received the PHS Outstanding Service Medal and the International AIDS Society 1992 International Life Prize.

Dr. Goedert is now the Chief of the Viral Epidemiology Branch of the National Cancer Institute and continues to work on how AIDS and other virus infections cause cancer