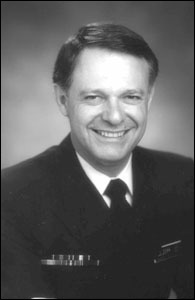 Dr. James C. Hill played an important role at the National Institute of Allergy and Infectious Diseases in the early years of the AIDS epidemic. He was a motivating force in building the Institute's strong AIDS research program.

Dr. Hill forged and maintained NIAID's relationships with government agencies, Congress, activists, and other community and political leaders. He helped focus national attention on the AIDS epidemic and the needs of individuals infected with HIV. “The sheer horror of AIDS–the debilitating, wasting, way in which very young productive people die–I don't think anything, at least in the modern era, quite compares with it,” Dr. Hill said.

Dr. Hill joined the NIAID in 1974. As an administrator of research projects that created and tested bacterial vaccines, he was influential in the development of both the meningococcal A and Haemophilus influenzae b vaccines. Because of this experience, he was chosen to establish the first AIDS research contracts at NIAID, setting in motion a project to gather samples from people with AIDS to see what was causing the disease. In 1984, he became special assistant to NIAID director Anthony Fauci and subsequently rose to deputy director. In this capacity, he championed new AIDS research initiatives.