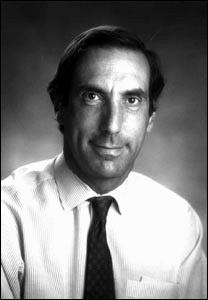 Because AIDS is a syndrome of opportunistic infections and other diseases brought about by a failing immune system, researchers have been drawn to AIDS from many disciplines. Dr. Henry Masur became interested in AIDS as an expert in Pneumocystis carinii, a rare cause of bacterial pneumonia usually seen only in patients with severe immune disorders. He was on the faculty at Cornell University in 1979 when a patient with Pneumocystis pneumonia came into the emergency room. “It was clear to me, because I knew the literature very well, that it was very unusual for someone to walk in, previously healthy, with Pneumocystis.” As several more cases, including men and women, appeared in the New York area, it became increasingly evident that a new disease was occurring.

Dr. Masur did not know it at the time, but he was among the first physicians to see a patient with AIDS. As the strange increase in P. carinii pneumonia began to appear in multiple parts of the country, Dr. Masur moved to the NIH where he remembers an environment ideally suited for tackling a complex emerging disease like AIDS. “We could get a lot of people who were free to choose their own interests,” he recalls, adding, “One of the real virtues of the NIH community is that there’s an expert on almost everything here.”

As Dr. Masur describes his involvement in AIDS research, he stresses the key contributions made by physician-investigators, individuals on the front lines who care for patients while drawing from basic research, links that often lead to new treatments. Without these scientists, Dr. Masur believes, AIDS might not have received such early research attention. “It looked like it was going to be a problem for them to take care of patients clinically,” he says, “so they went to the laboratory and came up with some of the initial answers.”

Dr. Masur is currently chief of the critical care medicine department at the NIH Clinical Center. He is a leading clinical researcher who continues to study better ways to treat HIV disease and its associated opportunistic infections.