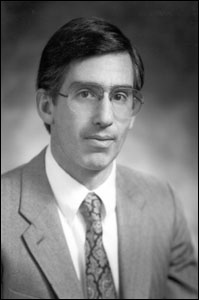 Dr. Harvey G. Klein became chief of the Department of Transfusion Medicine at the NIH Clinical Center in 1983, soon after AIDS was first recognized. Dr. Klein was involved in early studies to treat the mysterious disease, but he primarily headed efforts to keep the NIH blood supply free of HIV.

He assisted Drs. Clifford Lane and Anthony Fauci in their innovative studies involving AIDS patients with identical twins. These studies attempted to “reconstitute” the patients' depleted immune systems by giving them white blood cells from their healthy twins. Dr. Klein and his colleagues collected and transfused these white blood cells. Although the studies were not successful–the patients' immune systems rebounded for only a short time– they provided valuable information about the nature of AIDS.

When it became clear in 1984 that HIV could be transmitted through blood, Dr. Klein implemented policies and techniques to screen NIH blood donors for HIV, building upon his earlier successful efforts to protect transfusion recipients from viral hepatitis. Dr. Klein notes that in 1985 there were about 4,000 cases of transfusion-transmitted HIV in the United States, this figure fell to about 20 in the early 90s.

Dr. Klein continues to serve as chief of the Department of Transfusion Medicine.