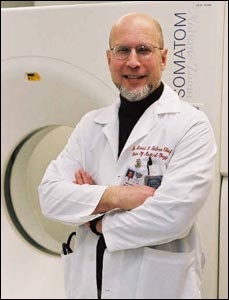 Dr. Edward Gelmann was involved in both the early laboratory research on the cause of AIDS and the early clinical programs in caring for AIDS patients at the NIH hospital, the Clinical Center.

He developed an interest in retroviruses when he was in medical school at Stanford University and joined the laboratory of Dr. Robert Gallo at the NIH in 1979 as a postdoctoral fellow to work on viral and human oncogenes. When AIDS first appeared, he was one of the scientists, in company with Dr. Gallo and other researchers, who began to explore the possibility that it was caused by a retrovirus. He moved from laboratory research in 1983 and became involved in clinical programs relating to Kaposi's sarcoma at the Clinical Center. He describes the “rich and fruitful" collaboration that developed between NIAID and NCI researchers in the clinical studies relating to AIDS patients in the Clinical Center and the excellent cooperation of these patients in the studies in which they were enrolled.

Dr. Gelmann continued to work with AIDS patients at the NIH until AZT and anti-viral therapy became the main focus of clinical trials. In 1988, he moved to Georgetown University and became Professor of Medicine and Oncology at the Lombardi Cancer Center. He conducts basic and clinical research on prostate cancer. In 2002, he was appointed to the Dr. William M. Scholl Chair in Medical Oncology.