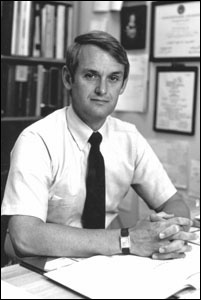 Dr. David Henderson chose academic medicine as a career because it would permit him to teach and care for patients while he remained involved in research. As the first official hospital epidemiologist at the NIH Warren Magnuson Clinical Center, Dr. Henderson was charged with protecting the hospital staff from HIV infection, even before the virus and its mode of transmission were identified.

“I wanted the health care practitioners to be as knowledgeable as we could make them and also to be aware that they were taking some risks that we could not measure,” remembers Dr. Henderson, who currently is deputy director for clinical care at the Clinical Center. He and other researchers devised the guidelines to reduce the risks for transmission of this bloodborne infection while preserving the confidentiality of HIV-infected patients.

As a hospital epidemiologist, Dr. Henderson recalls the early efforts to prevent the spread of AIDS, both in the community and in the healthcare setting. Implementing these strategies often made it possible for physicians to treat patients and researchers to study the disease as safely as was possible. The lessons learned from the early management of patients with AIDS underscored the need to remain vigilant against all infectious diseases.