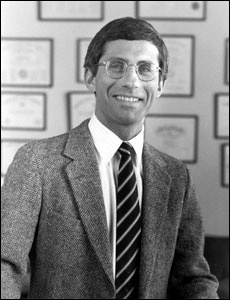 When I, someone who was very interested in AIDS, became Director of NIAID at the same time that the epidemic was taking off in an exponential fashion, it became clear to me that we would need to have a big push in AIDS research. I did something that was considered very bold at the time. I went to Jim Wyngaarden with a budget that would seem outlandish. I wanted to quadruple the amount that we were doing in AIDS research in one year. I explained to him that this increase was necessary because the AIDS epidemic was going to explode in our faces. We had to be out front, ahead of it. Jim agreed, and I am very grateful to him for that because he allowed the Institute to put a budget forward requesting a substantial increase.

Then it became clear that the administrative structure was not in place to handle the exploding amount of research that was being done on HIV and AIDS. At that point, I established the Division of AIDS within NIAID. I got a lot of resistance about that from the classic and traditional infectious disease people and from immunologists, not only in the institute, but outside. “Why are you having a special division of AIDS? Why not have a special division for every infectious disease?” My response to them, with all due respect to the importance of other infectious diseases, was “Right now in our era there is going to be nothing like AIDS, and so we need a separate division.” The Division now has turned into one of the largest divisions, if not the largest, that NIAID has.