Rocky Mountain Spotted Fever:
What is It and How Did We Find Out?

What is Rocky Mountain spotted fever?

Rocky Mountain Spotted Fever (RMSF) gets its name from its most recognizable symptom: the rash. However, the rash doesn’t appear until 2–4 days after a person becomes ill. The first symptoms include fever, headache, and vomiting. If left untreated, RMSF has a high death rate. Even with antibiotic treatment, people who recover from severe RMSF may lose arms, legs, or hearing and have other long-term problems.

Today we know that RMSF is carried by many species of ticks. You can get bit by them anywhere in the United States, although North Carolina, Tennessee, Missouri, Arkansas, and Oklahoma have the most cases—not Montana.

If you have been bitten by a tick and feel unwell, go to the doctor.

Read the CDC’s information about RMSF. 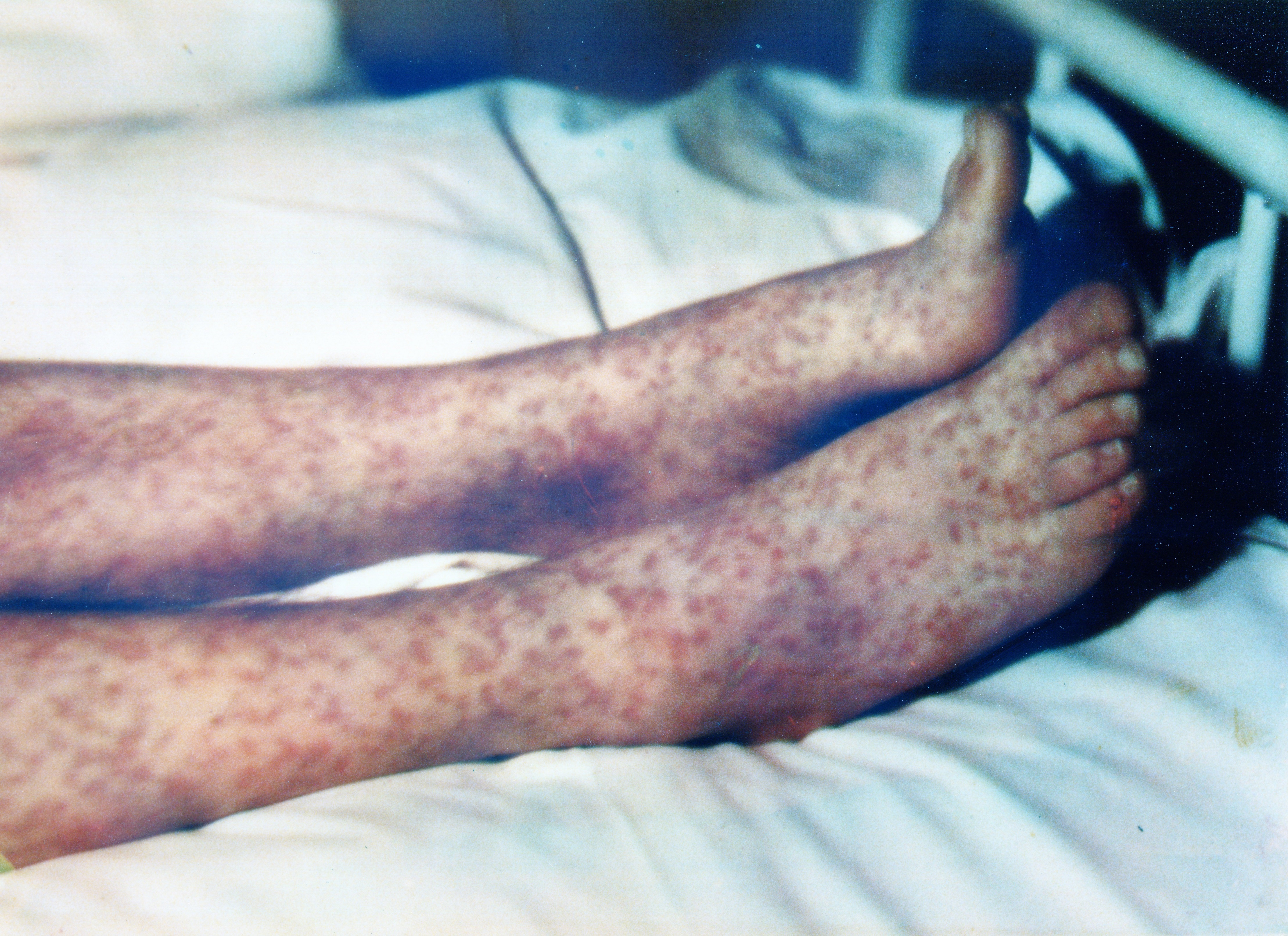 The rash associated with Rocky Mountain spotted fever is most visible on the arms and legs. This photo was taken of NIH scientist Dr. Norman Topping, who got RMSF in 1938 while researching it. He survived and developed the first effective treatment for RMSF using antiserum; his treatment reduced mortality rates but was replaced by more effective antibiotics. Image: Office of NIH History and Stetten Museum, 1526

One of the first questions that arises around a disease is: What causes it? How Rocky Mountain spotted fever (RMSF) progressed was already known: people got a fever, developed a spotted rash, and quite often died. In one specific area, the Bitterroot Valley of Montana, the death rate was around 80%. In 1902, Montana acted to protect its citizens, requesting the aid of scientists from the University of Minnesota and from the U.S. Public Health Service.

Dr. William Chowning and Dr. Louis Wilson arrived in the Bitterroot Valley in the spring of 1902. Both men were pathologists, who studied the causes and effects of diseases, often by using tissue samples.

Because RMSF occurred only in certain areas and only during the spring, and because the death rate from it also varied from area to area, they realized that RMSF was not a contagious infectious disease; it was most likely a disease carried by a living vector. A vector transmits a bacteria or a parasite which causes a disease from one animal to another—in this case, to humans.

Dr. Julius O. Cobb, a U.S. Public Health Service official, was also asked to investigate the disease, but by the time he got to Montana in June 1902, he found that Chowning and Wilson had done the work. He wrote:

“These gentlemen have gone so far in their experimental work as to be able to show that an entirely new disease has been encountered, and one never before described…. As hundreds of persons are bitten with ticks throughout this portion of the State, and as a great many are bitten by ticks from this infected locality and comparatively few contract the disease, it was fair to presume that all ticks did not harbor the parasite. This naturally led them to the presumption that the host was not the tick, but some animal infested by ticks…. Clinically, the disease is very odd….” 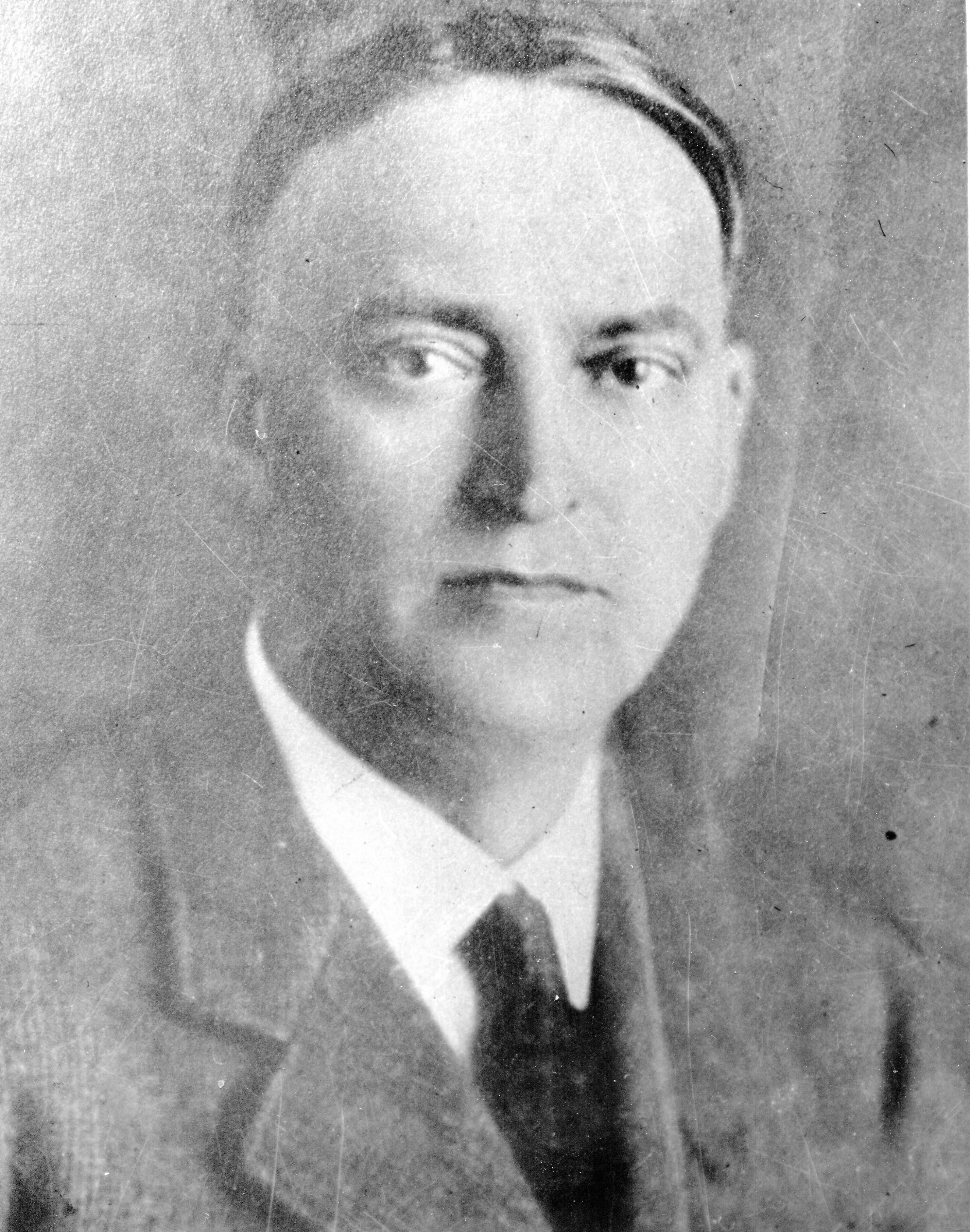 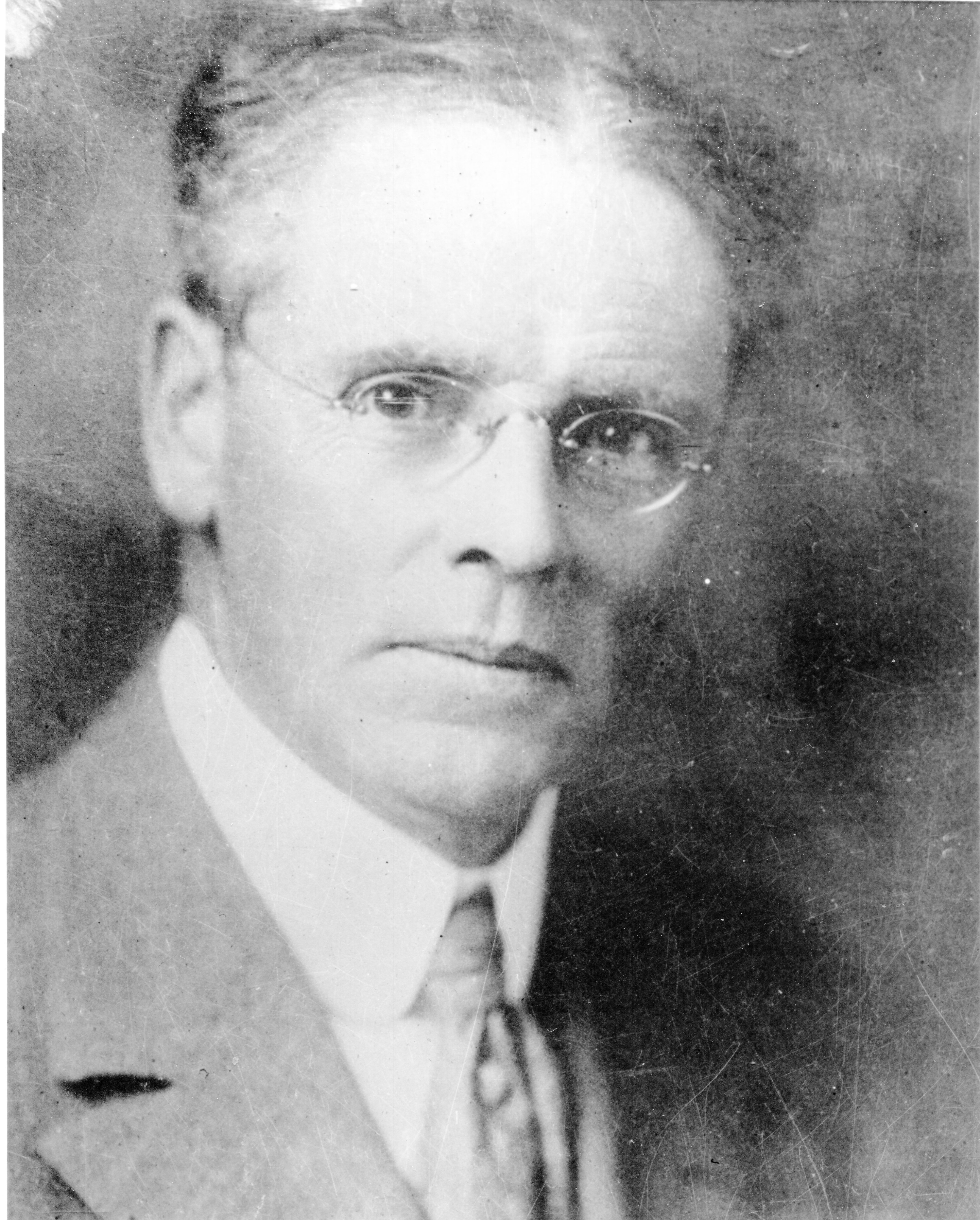 Dr. William M. Chowning worked at the University of Minnesota when he came to the Bitterroot Valley to investigate RMSF in 1902. He eventually began his own private medical practice.

Dr. Louis B. Wilson was also a pathologist at the University of Minnesota when he came to the Bitterroot Valley, Montana in the spring of 1902, to investigate the causes of RMSF. Wilson eventually became director of the Mayo Clinic in Rochester, Minnesota. Image: Office of NIH History and Stetten Museum, 1595 and 1579

The knowledge that Wilson, Chowning, and Cobb thought they had was an incorrect theory put forth by Dr. Charles Stiles, well-known to researchers of the time as a founder of medical zoology. Stiles taught that diseases which were accidentally spread on the feet of insects (for example, house flies picking up typhoid germs in outhouses and transmitting them to food on which they land) would all be bacterial diseases. Stiles believed that diseases that were transmitted only by insect bites would all be protozoan diseases.  Wilson and Chowning were looking for the wrong thing: a protozoa.

In 1903, Dr. John F. Anderson of the U.S. Public Health Service’s Hygienic Laboratory (forerunner of the National Institutes of Health) was sent to Montana to study RMSF. Unusual for the time, he was a trained bacteriologist. He worked with Chowning and Wilson and made several drawings of patients with RMSF, and also of what he saw in his microscope. His colleague, Dr. Charles Stiles, would later name the tick identified as carrying RMSF after Anderson: Dermacentor andersoni. Anderson would go on to be the director of the Hygienic Laboratory and vice president of E. R. Squibb & Sons pharmaceutical company.

This 1903 drawing by Dr. John F. Anderson shows red blood cells with what he, Chowning, and Wilson thought might be a protozoa.

When Dr. Charles Stiles of the U.S. Public Health Service came to the Bitterroot Valley in 1904 to study RMSF, he couldn’t replicate Chowning and Wilson’s findings of a protozoa that caused RMSF, so he pronounced that the tick theory was incorrect. None of them realized that they were looking for the wrong type of pathogen. The search for a definitive answer to the cause of RMSF continued. 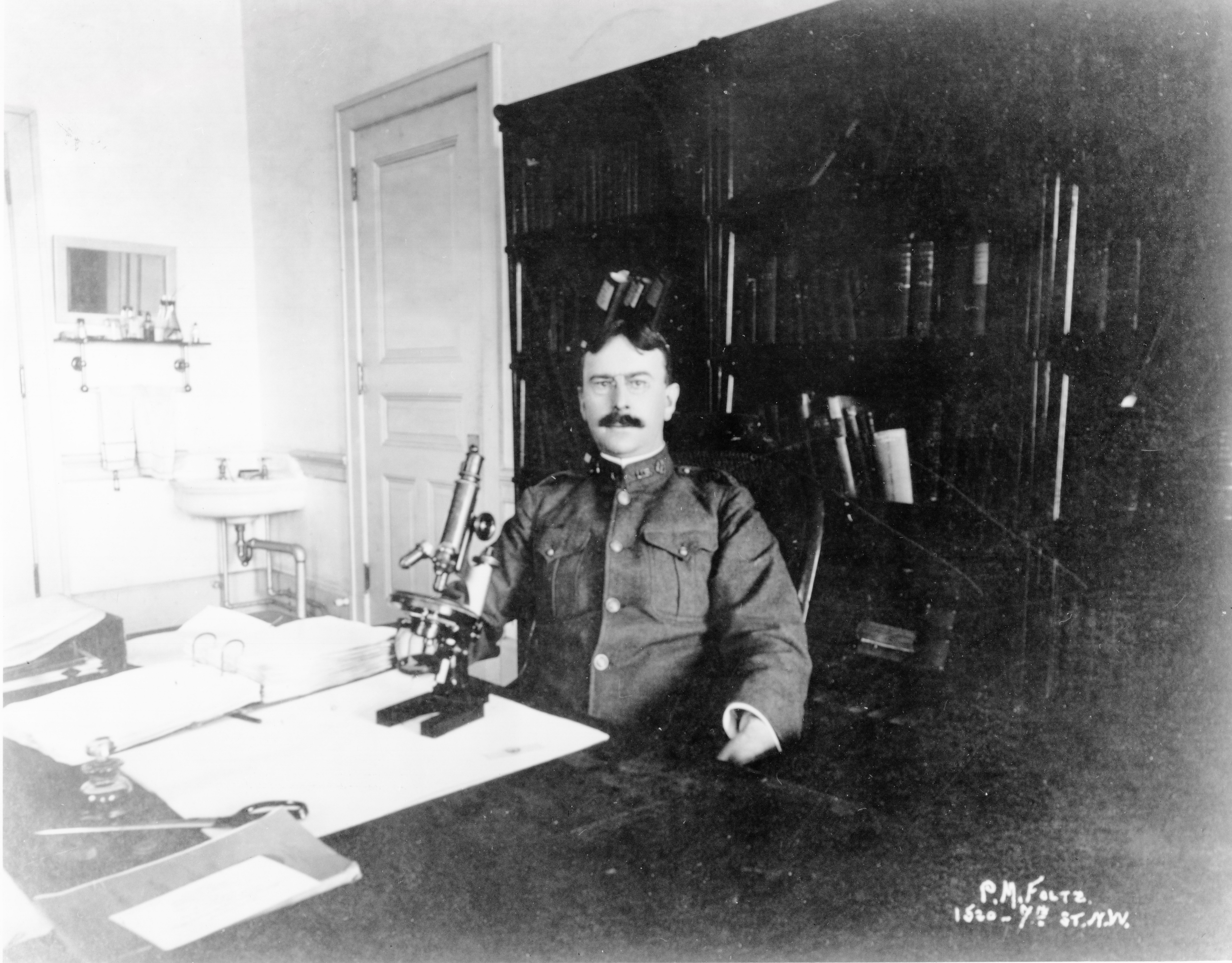 Dr. Charles Wardell Stiles became the first director of the Division of Zoology of the Hygienic Laboratory (precursor to the National Institutes of Health) in 1902. While incorrect about the vector for RMSF, he did important work on hookworm disease. Image: Office of NIH History and Stetten Museum, 1588

It was Dr. Howard T. Ricketts who confirmed Chowning and Wilson’s theory about ticks being carriers of RMSF. A pathology professor at the University of Chicago, he set up an experimental station at the Northern Pacific Hospital in Missoula, Montana, in 1906, where he did microscopic studies on samples from people with RMSF. He also conducted the animal studies necessary to see how RMSF was spread.

Ricketts proved that ticks transmitted RMSF from animals to humans by placing ticks on infected guinea pigs and then moving the tick to healthy guinea pigs, who then got ill. He also identified the bacteria that causes RMSF in the blood of infected animals and in ticks and their eggs; that bacteria are now called Rickettsia rickettsii in his honor.  A whole group, or genus, of very small bacteria that cause diseases in humans after insect bites is called Rickettsia, and the diseases they cause are called Rickettsial diseases, in his honor. As Ricketts was winding up his RMSF studies, he went to Mexico to study typhus; he died there of typhus in 1909. 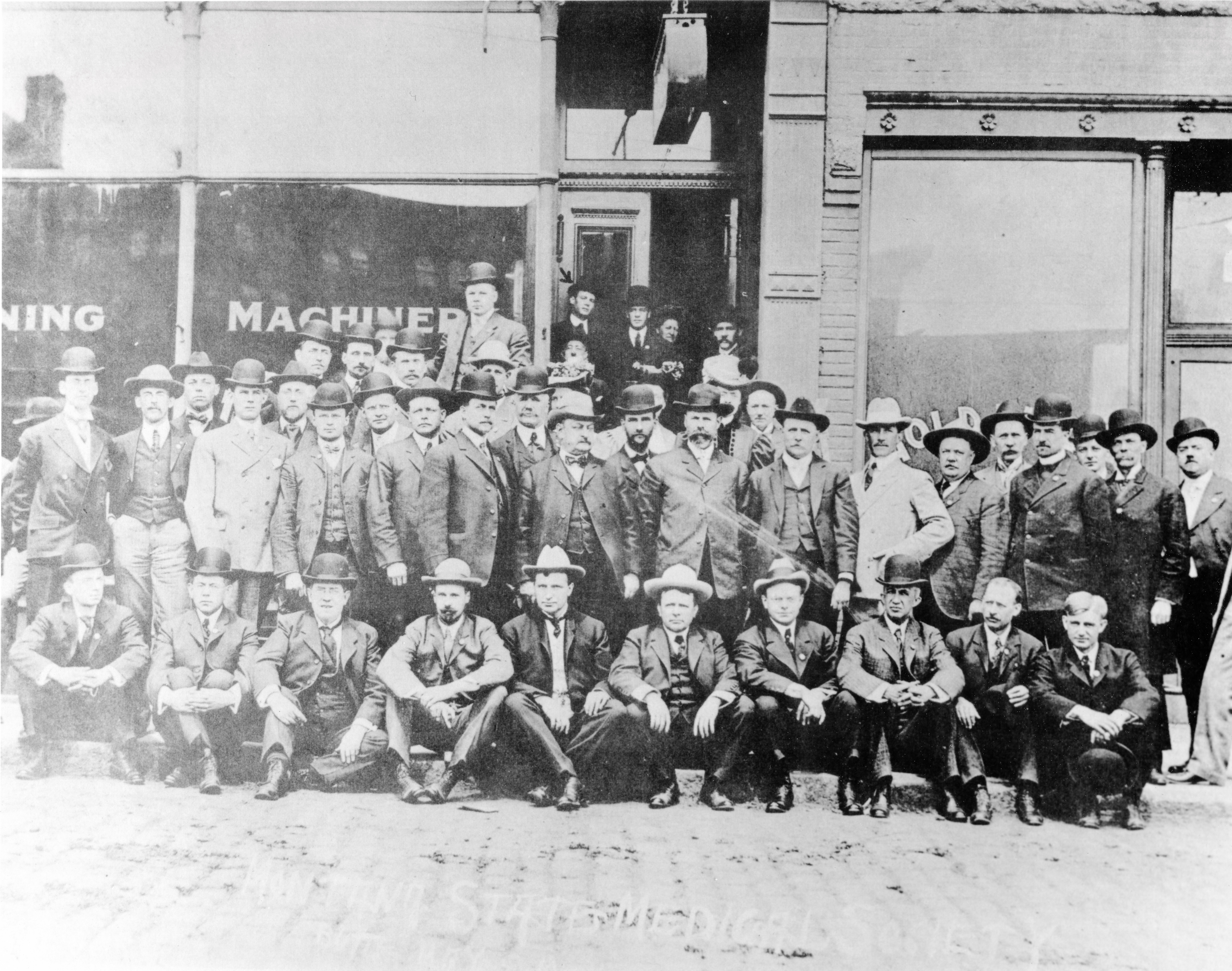 Dr. Howard Ricketts stands in a store doorway behind members of the Montana State Medical Society. Ricketts spoke at the May 1906 meeting of the society to urge the State of Montana to appropriate sufficient funds to continue his study of Rocky Mountain spotted fever. 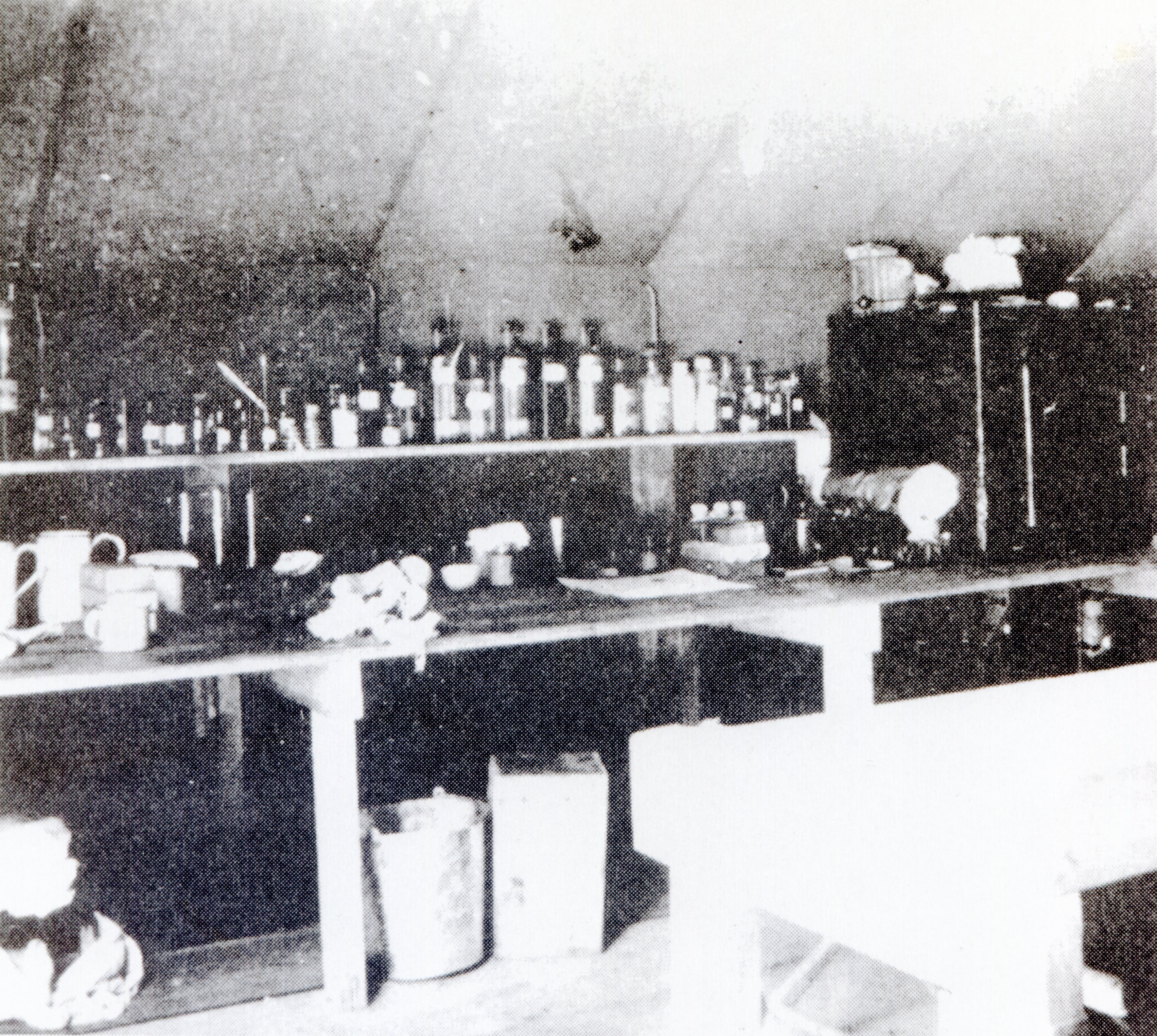 The interior of the tent laboratory that Dr. Howard Ricketts set up on the grounds of the Northern Pacific Hospital in Missoula, Montana, to study Rocky Mountain spotted fever in 1906.

Once it was known that people got RMSF by being bitten by infected ticks, the efforts to control ticks increased. Dr. Robert Cooley, the Montana State Entomologist, directed these efforts from 1917-1922. He also collected as many species of ticks as he could, building a huge reference collection for future researchers. He studied the ticks’ development from egg to adult to gain an understanding of how and when the ticks themselves got infected. He moved to the Canyon Creek Schoolhouse laboratory when it opened in 1921 as head entomologist.

Read more about Cooley in the People section. 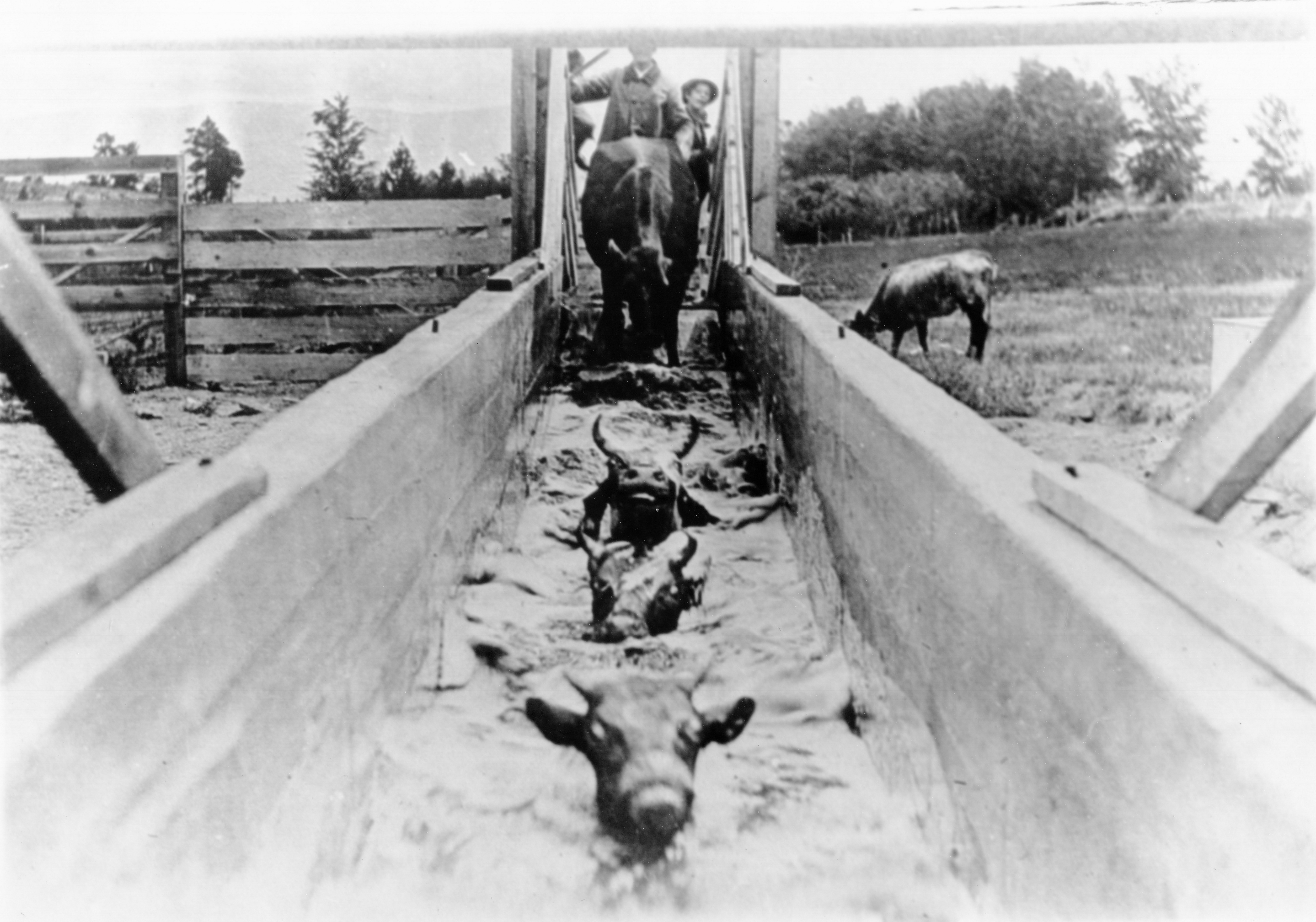 These cattle are being “dipped” in disinfectant in an effort to kill ticks. Dr. Robert Cooley suggested that people might come into contact with ticks through their cattle and other livestock so that killing the ticks on livestock would reduce the number of people who got ill. Image: Office of NIH History and Stetten Museum, 1520

In 1915, Dr. Ralph Parker moved to Montana to continue his studies on RMSF, which he had started as an entomology student under Dr. Robert Cooley. He also continued to work on finding ways to control the tick population and on the exact transmission process of RMSF.

Read more about Parker in the People section. 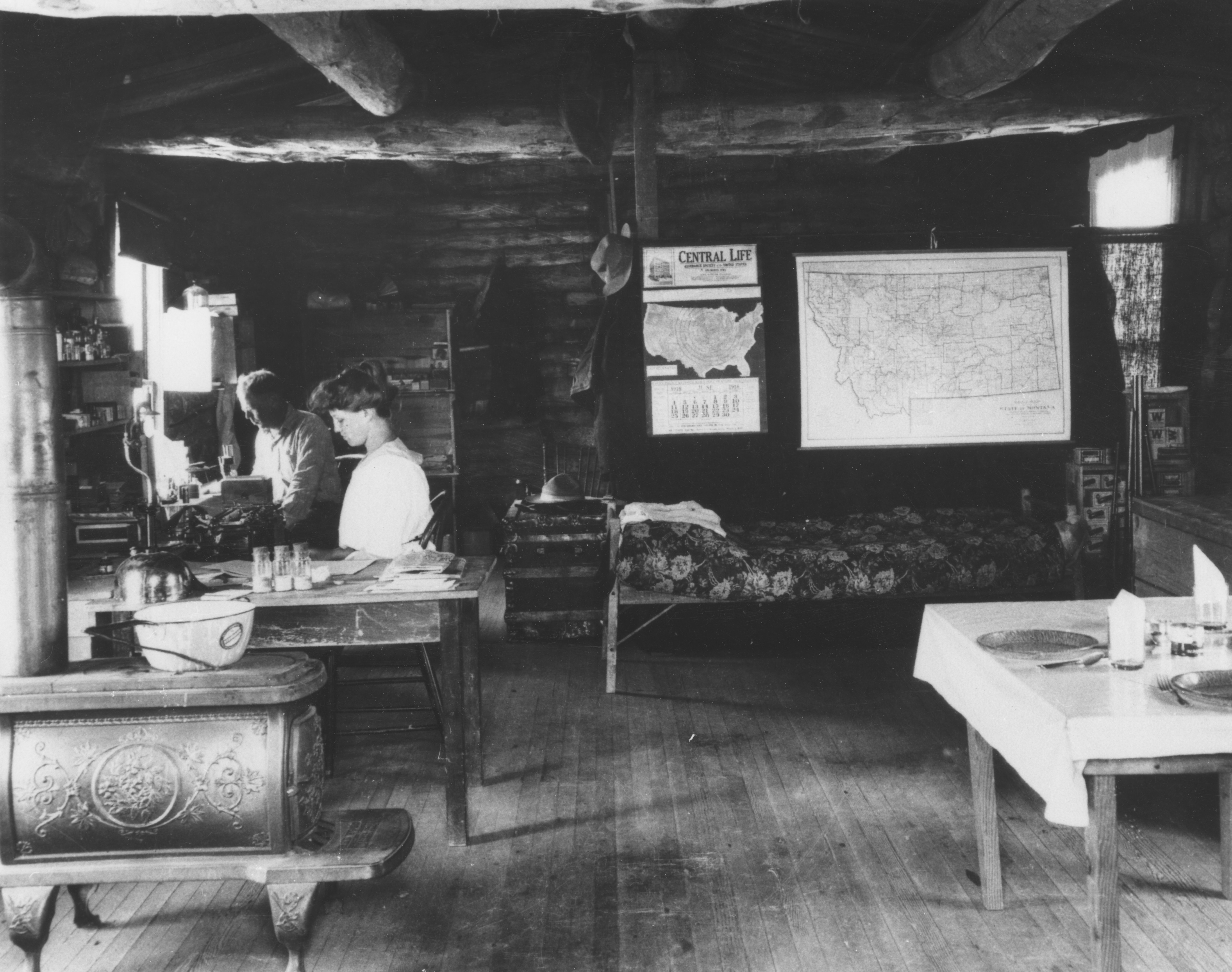 Dr. Ralph Parker and his wife Adah N. Parker conducted tick research during their honeymoon in Powderville, Montana, in 1916. She helped collect the ticks from the animals that he hunted. Image: Rocky Mountain Laboratories, 338

Despite the best control efforts they could devise, there was a serious outbreak of a very deadly strain of RMSF in the Bitterroot Valley in the early 1920s. The State of Montana asked the U.S. Public Health Service to send investigators to help Dr. Ralph Parker. Dr. Roscoe Spencer—a physician with bacteriological training—was the investigator who was sent. The Montana Board of Entomology also found larger quarters for the laboratory at the old Canyon Creek Schoolhouse. 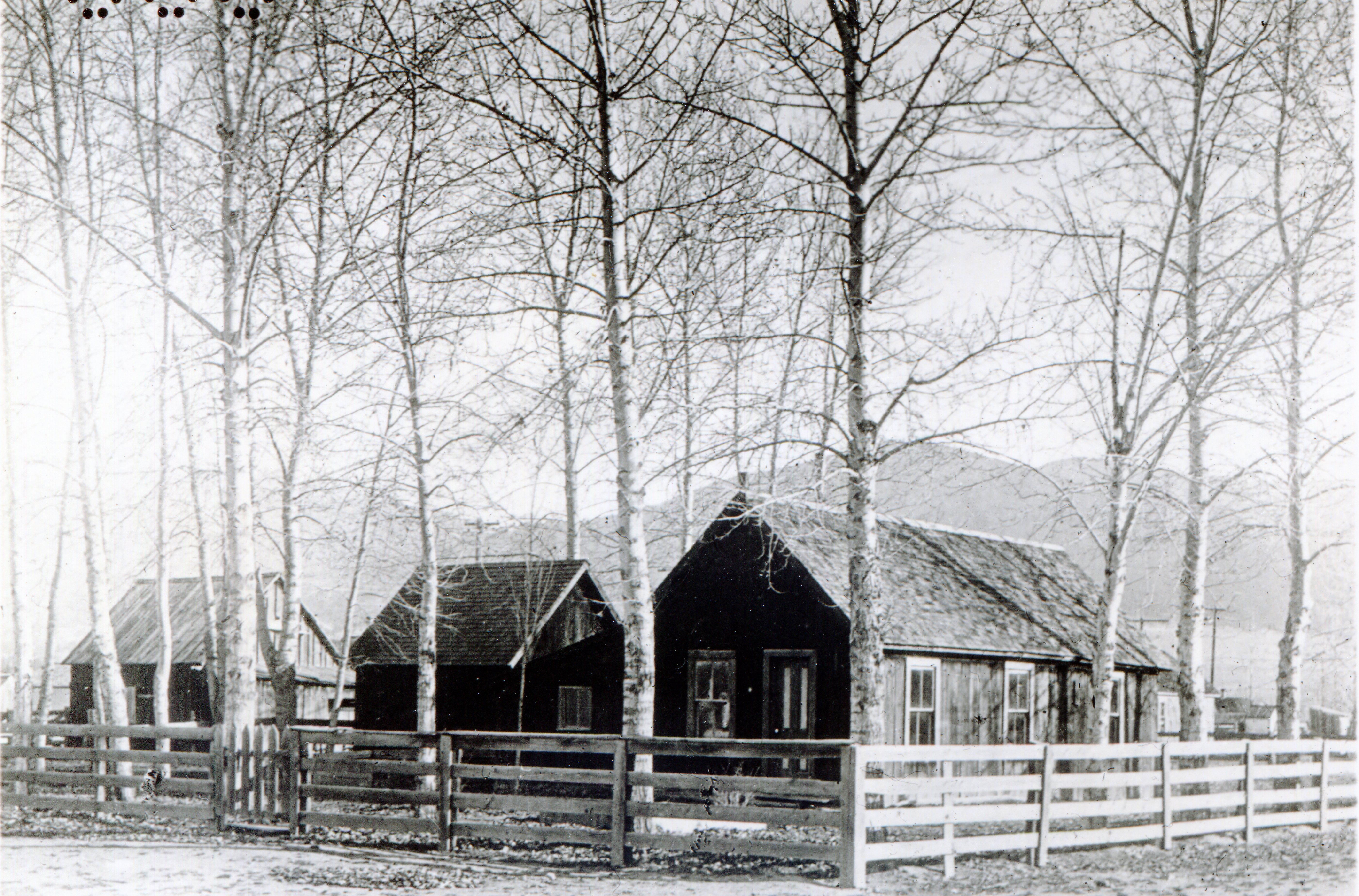 From 1919–1920, Dr. Ralph Parker used this woodshed as his laboratory in Victor, Montana, in the Bitterroot Valley, which was having a serious RMSF outbreak. When Parker moved his woodshed laboratory to the new Canyon Creek Schoolhouse Laboratory in 1921, the move only took one small truckload driven by J. H. Owings, who was paid $5. Image: Office of NIH History and Stetten Museum, 1531