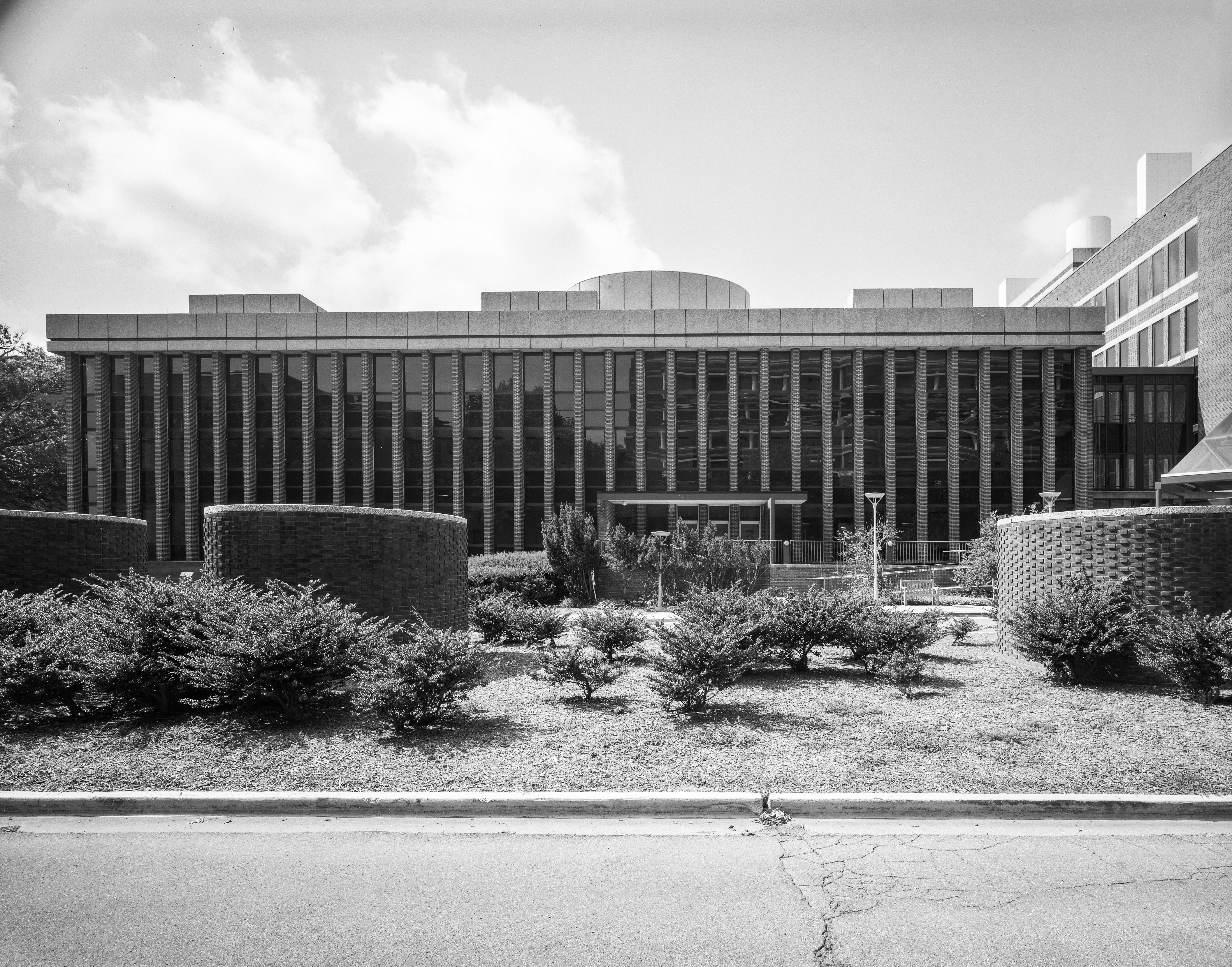 
Building 29A, NIH Division of Biologics Standards Laboratory Annex, is nationally significant for its association with the history of medicine and public health because within the laboratories of Building 29A, the NIH and then FDA staff helped to conquer some of the deadliest infectious diseases. In their regulatory role, they had the national responsibility to license vaccines, antitoxins, blood products, and other biologics to ensure their safety and effectiveness. To support this role, they did scientific research which resulted in the development of important standards and even new vaccines. 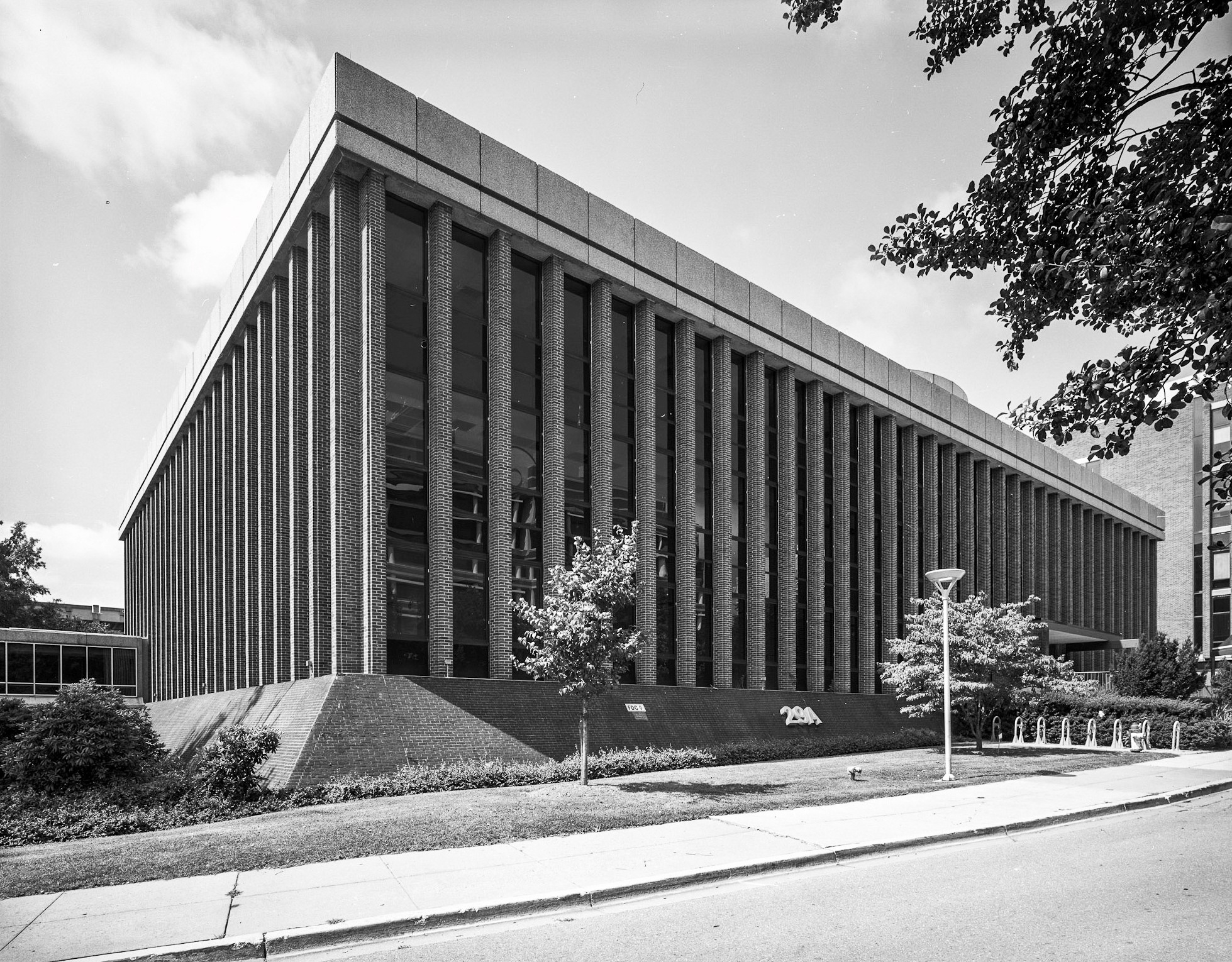 Building 29A Northeast Oblique Rob Tucher Photography
Within two years of finishing construction of Building 29, NIH began planning Building 29A as a laboratory annex. NIH's director at the time, Dr. James Shannon, described the quickening pace of vaccine development when he sought to justify to the Congress his request for funds for planning Building 29A so soon after Building 29 had been completed. As previously mentioned, the DBS at the time had just established standards governing the production and testing of oral polio vaccines developed by Albert Sabin, the development of measles vaccines was well underway, and a vaccine for infectious hepatitis was thought to be on the horizon. Justifying the request, Shannon stated that, “Although laboratory testing space, including quarters for experimental animals, appeared adequate with the move in 1961 to the new Biologics Standards Building, requirements for new programs in 1962, particularly live polio virus vaccine and measles vaccine have increased considerably” (House Committee on Appropriations, Hearings on H.R. 1916, 87th Congress, 2nd Session, 936). NIH quantified the growth in a prepared statement, stating that, “In the past five or six years the importance of biologics control and its role in the future development of preventive and therapeutic medicines has continually grown until in 1962 the program is approximately three and one-half times larger than when the Congress authorized the construction of the first Biologics Standards Building in 1956” (Senate Committee on Appropriations, Hearings on S. 1514, 87th Congress, 2nd Session, 1962, 474). 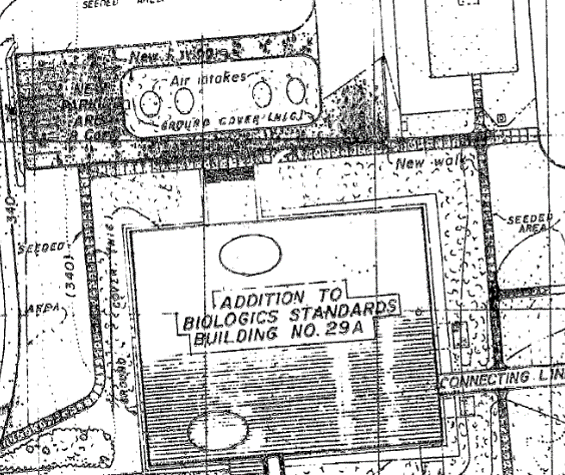 Building 29A was designed to be an annex for the Division of Biologics Standards Laboratory and was built from 1965 to 1967. The building does not contain the Georgian Revival style features that are present on the historic core of the NIH campus. Compared to construction drawings, the floor plan of Building 29A has not changed much since it opened in 1967. When the building was vacated in 2014, most of the laboratory equipment was removed, but some interior spaces do still convey the significance of the laboratory function.

Building 29A was always intended as an annex of additional space for Building 29, and the two functioned as a complex for biologics research and regulation. Much like Building 29, Building 29A is lacking in architectural ornament and focuses instead on the functionality and utility of the space. This was common for government and institutional buildings in the early 1960s and reflected the tight budgets and timelines for construction. Building 29A differs from Building 29 in terms of floor plan and in the large amount of glazing on the exterior. Building 29A retains its physical integrity and still conveys its 1960s modern design plan and the laboratory functions for which it is known.

Building 29A had a different floor plan and design from Building 29 and most other lab buildings at NIH. Instead of a central corridor, there was an exterior corridor around the entire perimeter of the building and then two smaller cross corridors. Labs faced the interior of the building and were shielded from light, heat, and noise from outdoors. A utility core behind each hallway allowed for this configuration and brought electric, plumbing, gas, etc. to the labs. Air intake towers, located in the median of the parking area in front of the building, provided clean air for the mechanical system, while a high velocity exhaust air system was placed on the roof to ensure dilution and dispersion of laboratory and vivarium exhaust air. 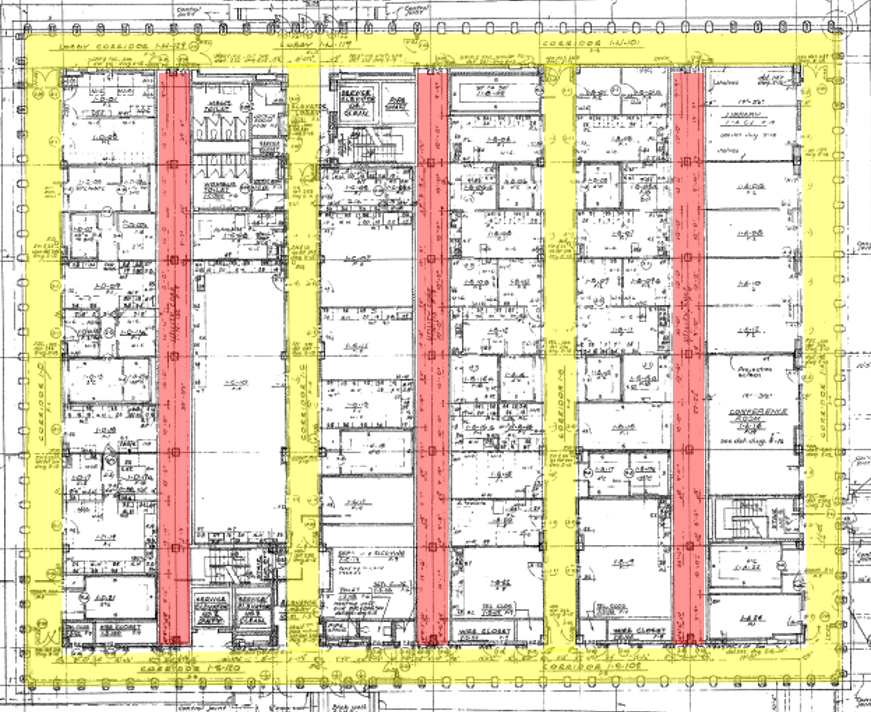 Utility cores are in red, pedestrian circulation (including the exterior corridor and cross corridors) is in yellow on Building 29A first floor plan.  NIH Office of Research Facilities 1964