In 1934, the French chemist A. Aghion discovered the chemical cause of the enlarged spleens and liver: a buildup of a lipid (fatty substance) called "glucocerebroside."

This discovery led researchers to speculate why there was too much lipid - did people with Gaucher disease make too much of the lipid for their bodies to handle? Or did their bodies not break it down and dispose of it? The answer to this question came during the early 1960s, when Dr. Roscoe Brady's group showed that people with Gaucher disease made the lipid normally but did not make enough of the enzyme "glucocerebrosidase" to break it down and clear it out of the body.

In 1967, Brady's group developed a convenient diagnostic test for Gaucher disease which works by measuring the activity of the enzyme glucocerebrosidase in white blood cells. The amount of enzyme one's body makes directly relates to how severe a case of Gaucher disease one has. The enzyme activity is also one way that may help to distinguish the three types of Gaucher disease described in this chart. 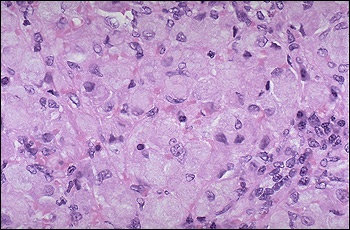 Enlarged cells in the spleen of a person with Gaucher Disease

The Three Types of Gaucher Disease

The next question of course was "Why do some people make too little enzyme?" The answer to this question came in 1987, when the first gene mutation that causes Gaucher disease was discovered by Dr. Shoji Tsuji and coworkers.

Gaucher disease turned out to be an "autosomal recessive" genetic disease. This means that both of the glucocerebrosdiase genes a person inherits - one from the mother and one from the father -- must be mutated for the person to have the disease. A person with only one mutated gene is a carrier. A carrier of Gaucher Disease is not affected but can pass the trait on to his/her children.

The inheritance diagrams below show how a child can be affected depending on the genetic material s/he inherits from her/his parents.

In the early 1970s, Dr. Brady's group devised an enzymatic test based on the enzyme's activity to tell people if they were carriers or not, and a procedure for prenatal diagnosis. These tests give people information about their genetic status so that they can prepare for the future.