After the 1950s, the SPF gave rise to many new uses for fluorescence in medical research.

American doctors and scientists began investigating the uses of fluorescence in medicine in the 1920s and 1930s. In the 1940s, then, when working with antimalarial drugs, the Goldwater group already knew that Atabrine and other drugs fluoresced at certain ultraviolet wavelengths just outside the visible range.

Indeed, other organic, or carbon-containing, compounds also fluoresce when irradiated by a light of the correct wavelength. After the 1950s, the SPF gave rise to many new uses for fluorescence in medical research. Today, fluorescence microscopes use sensitive electronic cameras to observe directly in three dimensions how cells function. Recently, advances in pulsed lasers have provided selective excitation of fluorescence in many tiny regions inside living cells and the ability to detect events lasting less than a trillionth of a second in proteins. Hundreds of new fluorescent dyes are available to light up specific targets, and fluorescent-activated cell sorters can be used to separate white blood cells from other cells found in blood. Using fluorescence might yield surprising new results in the future of medicine.

At the time, malaria killed close to 3 million people each year and infected millions more.

In March 1942 the Japanese army took control of the Dutch East Indies (Indonesia). In doing so, they cut off the rest of the world's supply of the malaria treatment quinine, harvested for hundreds of years from the bark of the Chinchona tree. At the time, malaria killed close to 3 million people each year and infected millions more. The disease was debilitating to U.S. Army forces in tropical regions.

The United States government responded by developing a major program to develop new drugs. Through dozens of universities, hospitals, and laboratories the government tested close to 15,000 potential compounds during the war. Government doctors used federal and state prisoners as well as lab animals such as ducks, dogs, and canaries for their tests. Syphilis patients, for whom malarial fever served as a cure, were a major source of experimental subjects.

Malaria is caused by a parasite that gets into the red blood cells and multiplies, causing the cells to rupture and the body to respond with a fever. For an antimalarial to work, it must intercept the parasite's life cycle by reaching the parasite in the patient's blood. The drug has to build up in the patient's blood until it has killed all the trouble-causing parasites.

By the spring of 1943, doctors at Goldwater had presented the army with new dosage rules for Atabrine, which had already been used in the place of quinine but with previously poor results. They also developed new drugs such as Chloroquine. Used for several decades, Chloroquine has been largely replaced by new drug compounds because the malarial parasites in regions such as Southeast Asia, portions of South America, and much of Africa became resistant to the drug. Organizations such as Roll Back Malaria and the Medicines for Malaria Venture, co-sponsored by several public and private international groups, fund research into new drugs for especially resistant areas. Click on the image above to see the life cycle of the malaria parasite in the human body Image courtesy of the Medical Arts and Photography Branch, NIH

Atabrine and the New Pharmacology

The focus of the Goldwater group's antimalarial research was on American Atabrine, a synthetic antimalarial first developed in Germany in the 1930s. Though scientists in the United States had synthesized the drug within a few years, troops did not usually take their medicine. The Atabrine turned them yellow, made them sick, and seemed to take forever to work. What was the problem?

Drs. Brodie and Udenfriend figured out how to measure Atabrine levels in the blood using fluorescence.

Dosage. Army doctors dispensed the Atabrine at the same dose levels they had used for quinine. In the 1940s, however, a new method of dose-setting was coming into vogue, and one of the biggest proponents of what was called the "New Pharmacology" was Dr. James Shannon. At Goldwater, he put Drs. Brodie and Udenfriend on the problem of re-setting the dosage for Atabrine, using this new approach.

Drs. Brodie and Udenfriend figured out how to measure Atabrine levels in the blood using fluorescence. Since Atabrine fluoresced at a certain wavelength, all they had to do was take a sample of blood plasma from a malarial patient who had taken Atabrine. When seen through a fluorometer, the plasma would "glow" at a level proportional to the amount of Atabrine in the sample.

The scientists found that, at the current dosage, the Atabrine was soaked up in muscle fiber and the liver, causing uncomfortable side effects before it was able to build up in the blood. By changing the dosage-to a first-day big dose to saturate the tissues followed by small daily doses that would then go right to the blood-the Goldwater group was able to save Atabrine, as well as millions of American troops abroad.

Dr. Shannon's so-called "gospel of blood levels" revealed the central importance to pharmacology of being able to measure the concentrations of drugs in the blood. This central issue led the Goldwater team to be interested in a more sensitive instrument than the fluorometer they had used during the war, and therefore led to the development of the SPF.

NIH scientist Dr. Julius Axelrod used the SPF to measure tiny amounts of serotonin in the blood. Serotonin was first isolated from the blood in 1948 and identified as being present in the central nervous system. The body system involving serotonin is known to affect mood, emotion, sleep, and appetite. One cause of depression is an abnormal function of the serotonin transmitter system. Therefore, a drug that builds the concentrations of serotonin should alleviate the symptoms.

Dr. Axelrod's research, for which he won the Nobel Prize in 1970, led to the development of SSRI (selective serotonin re-uptake inhibitor) drugs such as Prozac, Zoloft, and Paxil.

How does an SSRI work?

The brain is made up of neurons, which are interconnected brain cells. Messages travel along these cells. When a message reaches the end of a neuron, it has to jump a gap (called a synapse) to the next one. To do this, the neuron releases tiny amounts of a chemical (a neurotransmitter) into the gap between the nerve cells. Ideally, a nerve impulse starts in the new nerve, and thus the message gets from one nerve to the next. In order for the original nerve to recover and get the next message, it needs to replace its stocks of the neurotransmitter in the original neuron so it is ready to send the next message. The "healthy" body thus takes the neurotransmitter back into the originating neuron (this is called "re-uptake").

In the case of depression, certain neurotransmitters such as serotonin are lacking, so they cannot be taken back in full to the originating neuron and therefore cannot send the next message. SSRIs slow down the process of returning serotonin to the end of the neuron it comes from (they inhibit the process of re-uptake). This makes it more likely that enough serotonin will build up to set off the impulse in the next neuron. Therefore, SSRIs work by allowing the body to make the best use of reduced amounts of serotonin.

During the war, in the basement of Goldwater's Building D, were assembled what has been called "the workings of elite science"-the scientists who would go on to develop many of the great biomedical research advances in the postwar era.

Goldwater Memorial Hospital opened in 1939 as the first public hospital in America devoted solely to the treatment of chronic diseases. In 1942 it became the focal point for a national campaign to develop a new treatment for malaria-one of the most significant medical problems for the Allies in World War II. During the war, in the basement of Goldwater's Building D, were assembled what has been called "the workings of elite science", the scientists who would go on to develop many of the great biomedical research advances in the postwar era.

After the war, though the antimalarial group had moved, for the most part, to NIH, Goldwater itself continued to be the locus for research into chronic disease. Goldwater, which was named after S. S. Goldwater, a New York hospital commissioner, merged with the Bird S. Coler Hospital in 1996. The 2,000-bed long-term health facility provides extended care for people who need ongoing medical attention due to diseases including Alzheimer's and AIDS.

The National Heart Institute (NHI), one of the NIH's first institutes, was founded on June 16, 1948, to develop expertise in heart disease research and cardiovascular disease. The institute transfers basic science knowledge to physicians in the hopes of fighting diseases. In 1949 Dr. Shannon became director of the laboratories and clinics of the newly created NHI. He recruited many of his best researchers from Goldwater, including Drs. Bowman, Brodie, Udenfriend, and Berliner.

The National Heart Institute fostered collaboration among researchers, doctors, and scientists. Ideally, such interaction could accelerate the transfer of basic science knowledge to practicing physicians for the patient's benefit. A key component in this process was the Laboratory of Technical Development, where Dr. Bowman did his research. 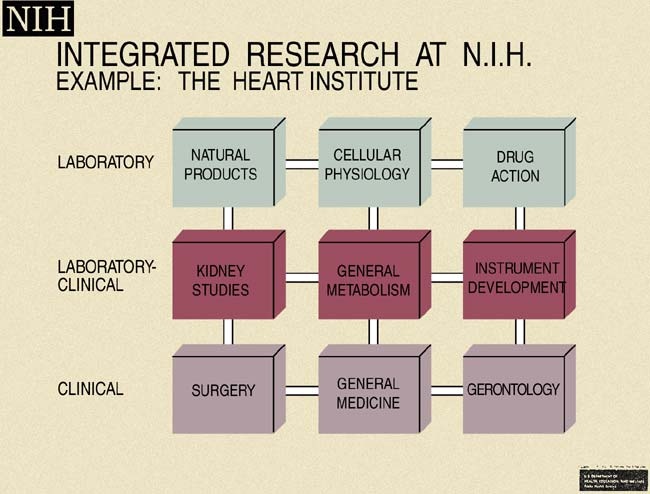