A spectrometer shines a light on a sample and measures how much light is absorbed at a specific wavelength. Knowing how much light is absorbed can help scientists identify the substances in a given sample, since each substance absorbs a different amount of light at different wavelengths. Spectrophotometers usually have a photomultiplier tube that amplifies the signal for accurate measurement.

Here is how it works: first, a bright light source is used to create light of a known wavelength and intensity. The light passes through a monochromator, which filters out all except a narrow band of wavelengths (or colors) which will be used to illuminate the sample. This narrow band of light is passed through the sample material where some is absorbed. The remaining light that passes through the sample strikes the light-sensitive detector. The detector generates an electrical signal in proportion to the light intensity. The electrical signal is amplified and read out on a meter or other device.

The three parts of the Spectro-Photo-Fluorometer: 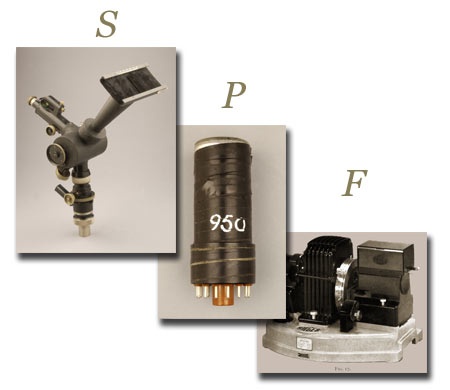 The purpose of a photomultiplier tube (PMT) is to measure very weak light.

The purpose of a photomultiplier tube (PMT) is to measure very weak light. The tube multiplies the effect of the light that strikes it and converts photons of light into electrical signals so that the light can be precisely measured.

Each photon (bit of light) strikes a photocathode, ejecting an electron. The electrons are accelerated toward a secondary electrode called a dynode, which is held at a more positive potential so that each electron gains enough energy to eject several electrons from the dynode. This is the electron "multiplier." By using a series of dynodes, the PMT creates a cascading effect-the system creates 100,000-10,000,000 electrons for each photon hitting the first cathode. The amplified signal can be collected and measured at the end.

A fluorometer measures the intensity of fluorescing molecules in a sample of blood or body tissue. Individual molecules are too small to be seen. However, when hit with ultraviolet light, these same materials can be seen with a fluorometer, because now the substances fluoresce, or glow. Scientists can use the fluorescent properties to see things that are otherwise too small to be visible.

The fluorometer measures the amount of fluorescent radiation produced by a sample when the sample is exposed to monochromatic light. Light focuses in on the cuvette. In early fluorometers, fluorescent light entered the vacuum phototube through the secondary filter at right angles to the exciting light. The photocurrent is recorded by an electric amplifier connected to a galvanometer, which detects and measures a small electric current by movements of a magnetic needle of coil in a magnetic field.

A fluorometer measures the intensity of fluorescing molecules in a sample of blood or body tissue.

This research tool combines the technologies of the spectrometer, the photomultiplier tube, and the fluorometer to provide sensitive measurements of the color spread, or spectrum, of fluorescent light in a sample. The instrument counts the amount of light given off in each color band and can be used to trace and measure tiny components of a sample of blood, body tissue, or other substance. 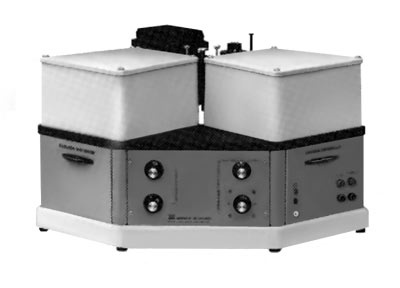 The early AMINCO-Bowman SPF used two monochromators, one to isolate a narrow band of light for excitation and the other at right angles to the first to analyze the emitted fluorescence by measuring the intensity of the fluorescent light vs. wavelength. For its excitation energy, the SPF used a xenon-arc lamp, which emitted a range of white light emission from the visible well into the ultraviolet.

Informative video about the operation of the SPF.

Video link on the operation of the SPF