A desperate call to scientists and doctors: find a treatment for malaria!

The origins of the SPF lie in the antimalarial research of the 1940s. During World War II, the United States government issued a desperate call to scientists and doctors: find a treatment for malaria! Since Japan had taken over most of the world's supply of quinine-the best known treatment-Allied forces in the Pacific Theater needed a new drug, and fast.

Led by Dr. James Shannon, scientists at Goldwater Memorial Hospital in New York City and elsewhere tested thousands of drugs during the war. In many of the tests, doctors gave their subjects malarial fever, then injected the patients with a particular drug. They needed to make sure the drug reached the malarial parasites in the blood and learn how to adjust the dosages to avoid nasty side effects. 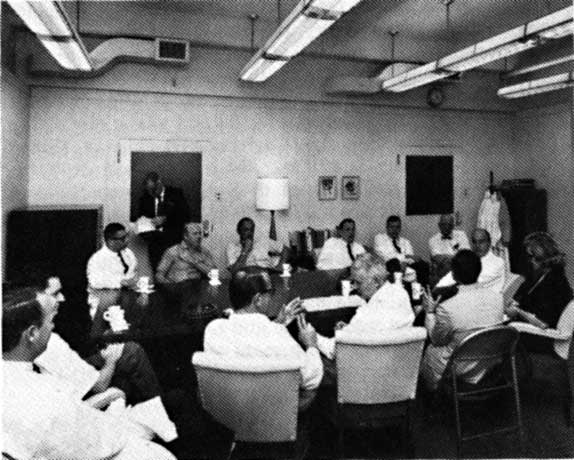 The National Heart Institute Laboratory chiefs in the 1960s includes several members of the Goldwater group who worked with Dr. James A. Shannon

Using fluorescence, Drs. Bernard Brodie and Sidney Udenfriend of Goldwater developed a special test. They knew that many of the candidate drugs would fluoresce when excited by certain wavelengths of ultraviolet (UV) light. With an instrument called a fluorometer, they could measure how much of the drug was in a patient's plasma sample by measuring the intensity of its glow. They thus found the critical level at which a promising drug, such as Atabrine, would attack the malaria-causing parasites without causing adverse side effects for the patient. Their results determined the standard dosage used by the U.S. armed forces as a preventative for malaria.

The problem was that some candidate drugs did not fluoresce at the specific wavelengths available to them with their fluorometer, and therefore these drugs were undetectable in the plasma. The doctors could not use fluorescence as a way of "seeing," or measuring, these drugs in the body. There had been reports of fluorescence at other wavelengths, but at the time there were no commercially available sensitive UV fluorometers. Though they did come up with a treatment for malaria, the Goldwater scientists realized that their ideas reached beyond their tools. They needed a new type of instrument.

With an instrument called a fluorometer, they could measure how much of the drug was in a patient's plasma sample.

In 1949 Dr. James Shannon, leader of the antimalarial research effort at Goldwater, was named director of the laboratories and clinics of the newly created National Heart Institute (NHI) at the National Institutes of Health (NIH) in Bethesda, Maryland. He recruited researchers from Goldwater, including lab technician Julius Axelrod and Drs. Bernard Brodie, Sidney Udenfriend, Robert Berliner, and Robert Bowman. Because of their interest in fluorescence in medicine that originated with antimalarial drug research, one of the group's early projects was the development of a new instrument that could help them learn more about how fluorescence could be utilized in scientific research.

Dr. Robert Bowman of the Laboratory of Technical Development took the lead on the project in the early 1950s.

He was known for his talent in instrument-making, an indispensable skill in a research environment where scientists need good tools with which to test their theories and to lead them to new ideas.

The Laboratory of Technical Development at the National Heart Institute, early 1950s 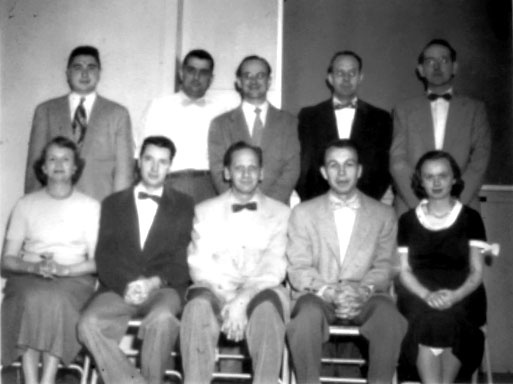 NHI scientists did not yet know at which wavelengths many biological compounds would fluoresce. If the new instrument could emit light at wavelengths throughout the ultraviolet range, scientists might be able to excite fluorescence in compounds that could have interesting research applications. The question was, if they learned more about fluorescence, would this be useful in a practical as well as theoretical sense?

Working with others at NHI, Dr. Bowman developed the first prototype of his spectrophotofluorometer in 1955. Unlike previous fluorometers, this new instrument was able to vary the wavelength of exciting light as well as measure the intensity and wavelength of the emitted fluorescent light. This instrument could be used to survey biological compounds and help scientists figure out new ways to use fluorescence to study the body.

If they learned more about fluorescence, would this be useful in a practical as well as theoretical sense?

NIH project description sheet for the"development of Spectrophotofluorometry and its application to biological measurements," 1955

Dr. Bowman had to improvise with his design. Authorized only to buy one expensive monochromator, for example, he built the other one from parts he obtained from his contacts in the New York junk shop trade. One of his parts, a Steinheil quartz prism spectrograph, had been "liberated" from Germany during the war. He made his first prototype SPF with a mixture of used and new parts, including diffraction gratings and mirrors attached to a stone benchtop and "glued" in place with wax."

Because of exciting results with the prototype, the American Instrument Company (AMINCO) of nearby Silver Spring, Maryland, became interested in marketing the new instrument. The company assigned an engineer, Hugh Howerton, to collaborate with Dr. Bowman on a commercial version of the SPF-one that could be made without wax and war relics. The first AMINCO-Bowman SPF was exhibited at the 1956 Pittsburgh Analytical Instrument Conference.

In order to build interest in its product and promote research in the field of fluorescence, AMINCO funded a postdoctoral fellowship in fluorescence analysis for research at the National Heart Institute. The first AMINCO fellow, Dr. Daniel Duggan, studied hundreds of fluorescent compounds. His research convinced Dr. Bowman and AMINCO that they should proceed with the production of the SPF.

In the 1950s and 1960s, AMINCO marketed the SPF to the research field. Company sales representatives traveled across the country to train university faculty and other scientists how to use the instrument. The company even launched a newsletter called Fluorescence News.

He made his first prototype SPF with a mixture of used and new parts. 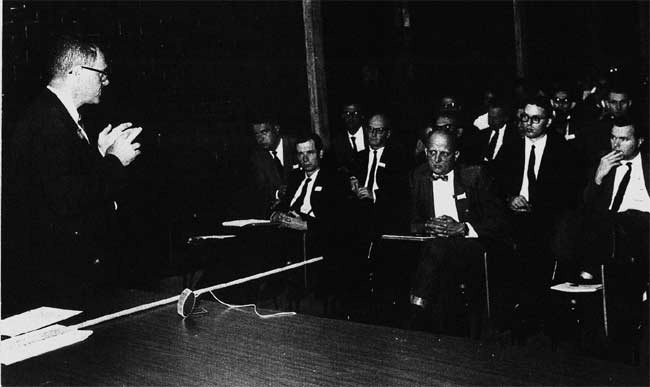 AMINCO engineer Hugh Howerton presenting a symposium about the SPF. Dr. Bowman is seated in the front row 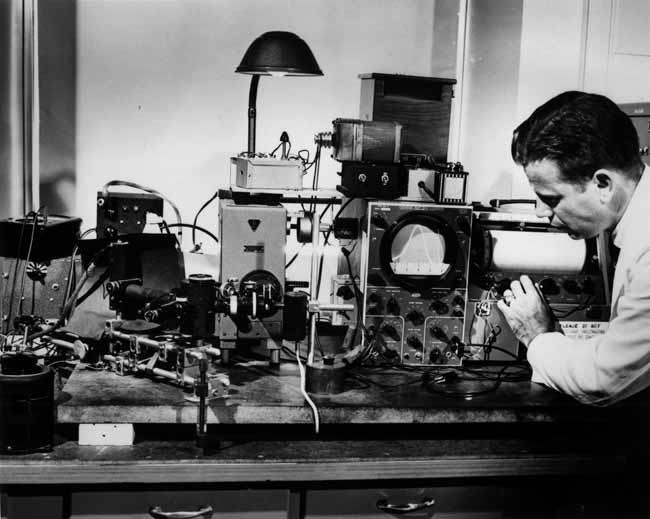 Dr. Daniel Duggan, a postdoctoral fellow at NHI, with the first laboratory prototype of the SPF

AMINCO sold out its initial run of twenty-five instruments, an impressive record in the tiny biomedical research market. 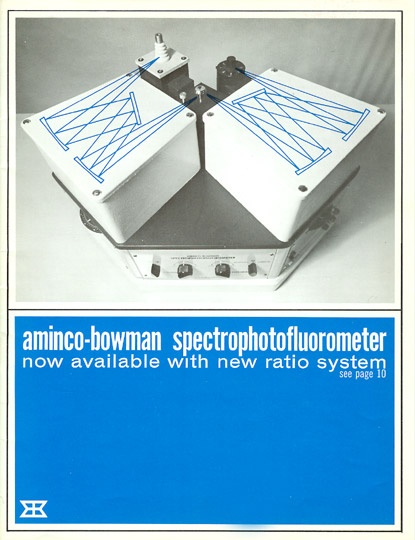 This Aminco sales bulletin from 1956 advertised "A New Analytical Instrument." Click on image to flip through the pages of the bulletin 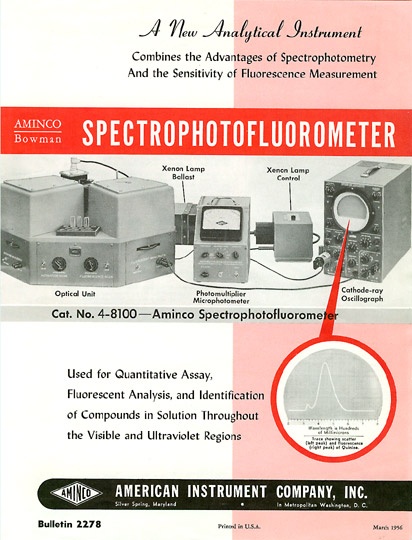 Aminco showcased new features of the SPF in this 1971 sales catalog. Click on image to flip through the pages of the catalog

Dr. Sidney Udenfriend used the SPF to test the fluorescence of different substances that would be of interest to biological scientists. To the amazement of the profession, he detected fluorescence in many molecules that had not been known to fluoresce! He and Dr. Bowman published a paper on the results of the early experiments with the SPF. Later, Dr. Udenfriend edited two volumes entitled Fluorescence Assay in Biology and Medicine. These works helped other scientists create new ways to use fluorescence in their own research.

By 1955 Dr. Julius Axelrod-Dr. Brodie's former lab technician-had moved on to the National Institute of Mental Health (NIMH) and was working on his own experiments. He began using the new SPF in his research on what are now known as neurotransmitters in 1957.

"The SPF . . . changed the direction of the whole field of neurobiology," wrote Dr. Axelrod, looking back on his experience. He used the SPF to trace and measure tiny amounts of norepinephrine and serotonin in the brain. These neurotransmitters were present in the body in such minute amounts that no previously existing technology could have detected them. This research led to the development of antidepressant drugs such as Prozac. In 1970 Dr. Axelrod was awarded the Nobel Prize in Physiology or Medicine for his work with neurotransmitters. 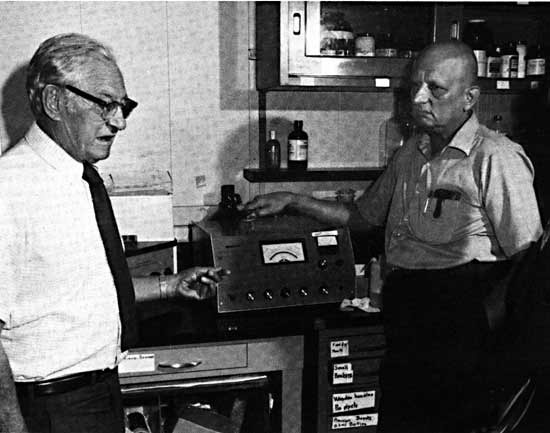 In the decades following Dr. Axelrod's groundbreaking work, many other scientists have used the SPF in their research. Dr. Bowman could never have imagined these applications back in 1955. He provided a tool for a new generation of scientists, who take the fluorescence phenomenon for granted and use variants of his instrument in their search for new ways to learn about the human body.
Today, fluorescence and updated versions of the SPF are used in measuring the quantity or cellular location of drugs, salts, proteins, or DNA. Other examples of research using fluorescence include: sequencing DNA; detecting viral or bacterial DNA during PCR (polymerase chain reaction) tests of potential bioterror samples; studying protein and drug activity and binding; measuring cell markers in AIDS; researching how muscles work; and tracing neuron receptors to map the brain.

He provided a tool for a new generation of scientists. 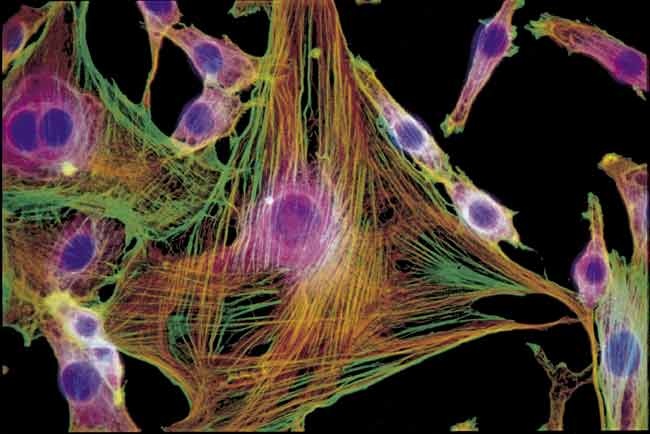 Photomicrograph of mouse fibroblast cells stained with three different dyes: two for different cytoskeletal components (green stain for actin fibers, orange for tubulin fibers), and one (violet) for the DNA coiled and packaged inside cell nuclei. Photograph by Jennifer Kramer and Sam Wells.
Used with permission of Molecular Probes, Inc.

Videos about the uses of fluorescence and the SPF.