Julius "Julie" Axelrod won the Nobel Prize in 1970 for neurotransmitter research conducted in part with the spectrophotofluorometer (SPF). Dr. Axelrod was born in 1912 in New York City and attended the College of the City of New York. After graduation he worked as a lab assistant and a research chemist. He then moved on to Goldwater Memorial Hospital, where he worked as Dr. Brodie's lab technician for many years. In 1949 both Axelrod and Brodie joined the newly formed National Heart Institute (NHI) and while at NHI Axelrod earned his doctoral degree at George Washington University.

In 1955, after completing his doctoral work, Dr. Axelrod became chief of the Section on Pharmacology at the Laboratory of Clinical Science at the National Institute of Mental Health (NIMH) and began using the new SPF in his research on neurotransmitters. With the SPF, he was able to measure tiny amounts of neurotransmitters in the brain. He studied norepinephrine and described the process for storage, release, and "re-uptake" by the cells as needed. For this work, he was awarded the 1970 Nobel Prize in Physiology or Medicine. Dr. Axelrod formally retired from NIMH in 1984, though he continued to keep up a laboratory and be active in NIH research. 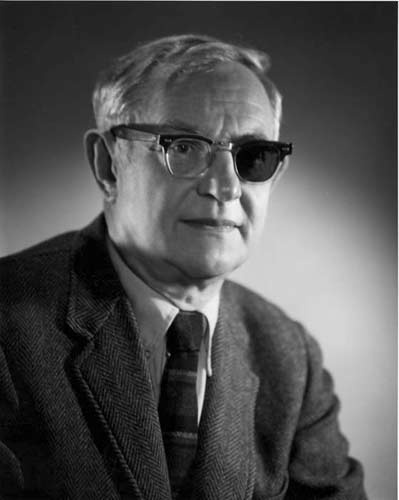 Robert Berliner was an eminent renal physiologist who was part of Dr. Shannon's group at Goldwater Memorial Hospital during World War II and came to NIH after the war. Dr. Berliner, born in New York City in 1915, earned his B.S. degree from Yale and his M.D. from Columbia in 1939. He served his medical school residency at Goldwater Memorial Hospital and moved to the National Heart Institute in 1950.

Dr. Berliner was chief of the Laboratory of Kidney and Electrolyte Metabolism at NHI for twelve years (1950-1962). He also served as the director for intramural research for that institute and in 1968 was named director of Laboratories and Clinics at NIH. He accepted an appointment as the first deputy director for science at NIH in 1969, a post he kept until he left NIH to become dean of the Yale University School of Medicine in 1973. Dr. Berliner, who studied the control of the excretion of sodium and potassium salts in the kidney, remained on the Yale faculty as an emeritus professor of cellular and molecular physiology until his death. 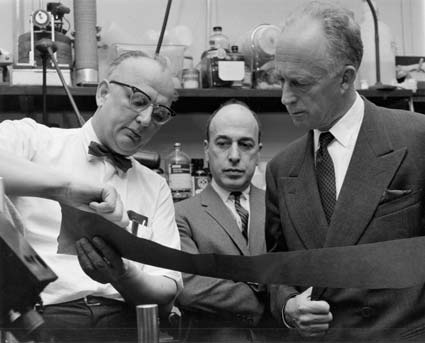 Robert Berliner (center) looks on as Robert Bowman (left) discusses his research with an AMINCO representative.

Dr. Robert L. Bowman invented the practical spectrophotofluorometer (SPF). Born in New York City in 1916, Bowman tinkered with crystal radio sets, cameras, spare parts, and chemicals as a youth. He received his M.D. degree from the New York University College of Medicine in 1942 and went on to serve in the U.S. Army Medical Corps during World War II. After the war he returned to New York to work at Goldwater Memorial Hospital. 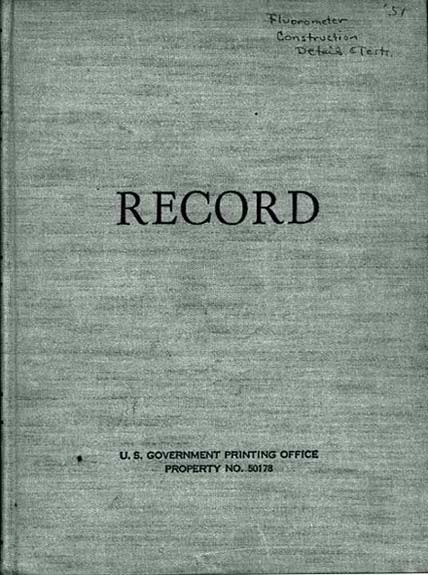 During his career at NHI, Dr. Bowman worked with other scientists to develop instruments that would help them do their research. Trained as a doctor and possessing a special knack for instrument manufacture, Dr. Bowman had an unusual mixture of talents and was honored with many awards including the 1967 American Chemical Society award in chemical instrumentation. 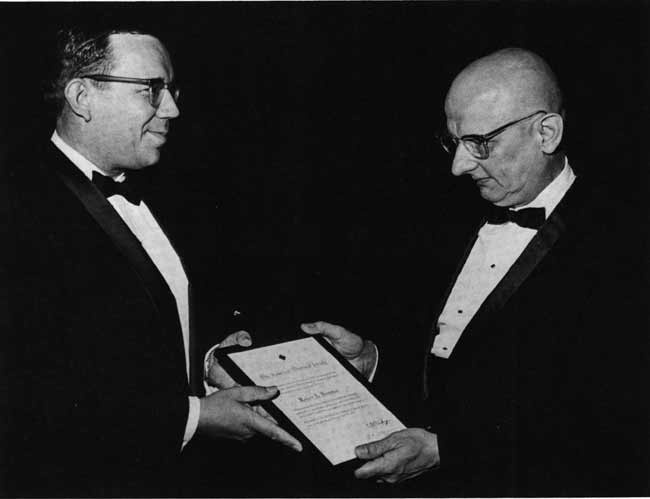 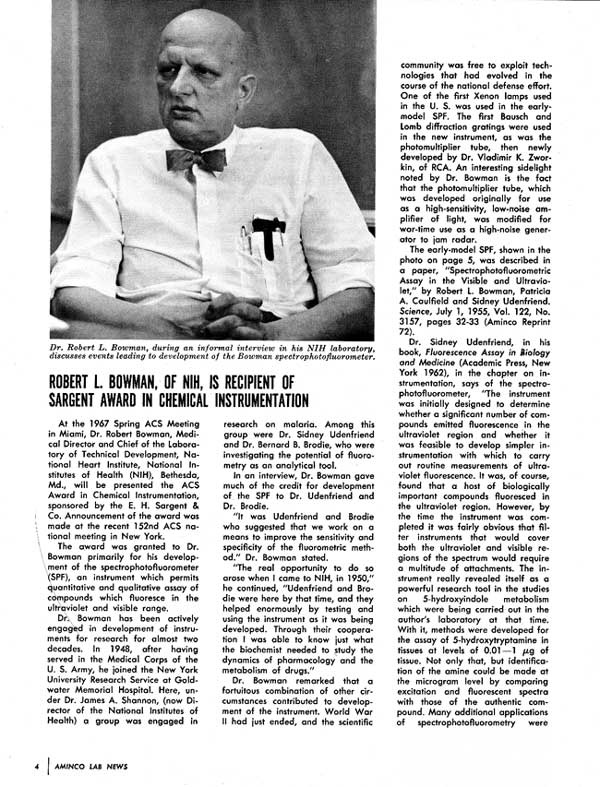 Dr. Bernard B. "Steve" Brodie was an internationally renowned pharmacologist whose groundbreaking work at Goldwater and NIH-including his involvement in the development of Tylenol-earned him many honors. Dr. Brodie attended McGill University in Montreal and then studied organic chemistry at New York University. He came to Goldwater Memorial Hospital to work with Dr. James Shannon's antimalarial group during World War II. His important publications in the 1940s helped lay the groundwork for the future study of drug metabolism.
As head of the Laboratory for Clinical Pharmacology at NIH after the war, Dr. Brodie worked with and trained a group of scientists who would become the leaders in the science of drug metabolism. Their work was accompanied by increased research into instrumentation and technology, including the spectrophotofluorometer. Dr. Brodie won the Lasker Award, often considered the American Nobel Prize, in 1967. The award cited his "extraordinary contributions to biochemical pharmacology." 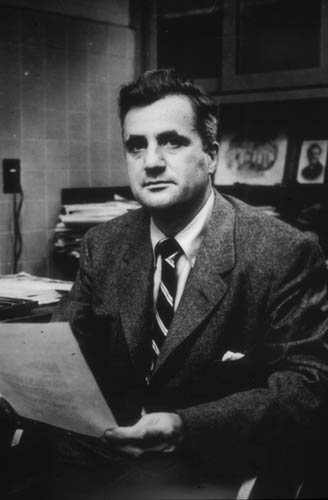 Dr. James Shannon, leader of the Goldwater antimalarial research group, served as director of NIH from 1955-1968. Shannon, born in 1904, was educated in New York City and received his M.D. from the New York University School of Medicine in 1929. After serving his residency at Bellvue Hospital, Shannon returned to NYU to study for the Ph.D. in Physiology, which he earned in 1935. He spent the next fifteen years on the faculty of the NYU School of Medicine, where he studied the relatively new field of kidney physiology.

In 1941 Shannon took responsibility for directing the NYU Research Service at the new Goldwater Memorial Hospital at Welfare (now Roosevelt) Island in New York. However, his plans to study renal physiology there were interrupted by the government's call for research into antimalarial drugs. He assembled a group of doctors responsible for recommending an appropriate dosage of Atabrine. They also developed Chloroquine, the drug of choice to treat malaria for several subsequent decades. After the war, Shannon was named director of a pharmaceutical company before becoming an associate director in charge of research at the newly created National Heart Institute at NIH. 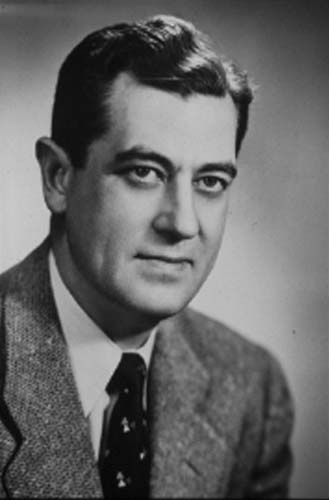 In 1955 Shannon was named director of NIH, a post he held for thirteen years. He oversaw a period of vastly increased construction, increased funding for research personnel and laboratories, and the creation of new research centers. Shannon brought money from Capitol Hill and new optimism to NIH, from which he retired at the mandatory age of sixty-four in 1968. Shannon then served in a variety of consultant and board positions with various universities, hospitals, and other institutions. To honor him for his many contributions to NIH, the central administration building (Building 1) was named for him in 1983.

Dr. Sidney Udenfriend, a member of the Goldwater antimalarial group, subsequently worked with Dr. Bowman at the National Heart Institute (NHI) and analyzed and catalogued substances using the spectrophotofluorometer (SPF). Udenfriend had earned his master's degree at New York University (NYU) when he joined the Goldwater group in 1942. He and Dr. Brodie developed the special test with the photofluorometer to screen and test antimalarial drugs during World War II. After the war, Udenfriend returned to graduate school at NYU to finish his doctorate. Dr. Udenfriend came to work at the NHI in 1950 at Dr. Shannon's invitation, following a postdoctoral fellowship at Washington University in St. Louis. At NHI he helped his colleague Robert Bowman develop the SPF.

Dr. Udenfriend left NIH for private industry in 1967 to become the founding director of the Roche Institute of Molecular Biology (RIMB), a position he held until1983. Formerly located in Nutley, New Jersey, RIMB was originally staffed by many of Udenfriend's former colleagues from Dr. Brodie's lab at NIH. When RIMB closed its Nutley laboratories in 1995, Dr. Udenfriend, who still maintained an active lab there until the closure, called the institute "the envy of scientists around the world, a camelot of the biological sciences." 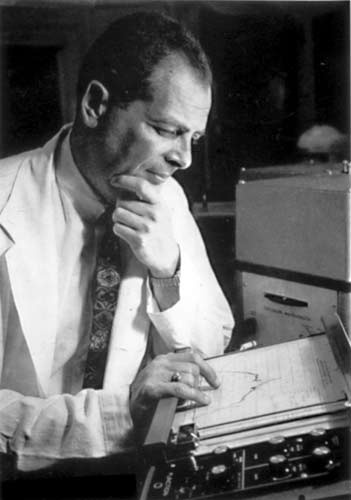 In 1995 Dr. Sidney Udenfriend wrote a history of the SPF, "Development of the Spectrophotofluorometer and its Commercialization."