Buildings 29 and 29A are nationally significant to the history of medicine and public health because within the laboratories of these buildings the National Institutes of Health (NIH) and then the Food and Drug Administration (FDA) staff helped to conquer some of the deadliest infectious diseases. In their regulatory role, NIH and then FDA had the national responsibility to license vaccines, antitoxins, blood products, and other biologics to ensure their safety and effectiveness. To support this mission, they did scientific research which resulted in the development of important standards and even new vaccines. Some of the most well-known scientists of the 20th century worked in these buildings, as well as the key administrators and others who supported their work and the mission of biologics regulation; 22 of them are profiled in the biographies section.

Historic American Buildings Survey (HABS) architectural documentation of Buildings 29 and 29A at the NIH is part of the efforts to mitigate the adverse effects of the planned demolition of the buildings. The survey and fieldwork were completed July 12–14, 2021. The HABS materials will be available in full on the Library of Congress website in addition to portions of them being presented here.

The FDA Center for Biologics Evaluation and Research (CBER) moved from the NIH to the FDA White Oak Campus in 2014. This move completely vacated Buildings 29, 29A, and the circa-1994 Building 29B. Building 29B has been reoccupied by NIH staff, following moderate renovation. NIH completed feasibility studies and determined in 2020 that it is not viable to reuse Buildings 29 and 29A, and demolition is planned. As these are historic buildings on Federal property, Section 106 of the National Historic Preservation Act (NHPA) and its implementing regulations (36 CFR §800) must be followed. A Memorandum of Agreement (MOA) was entered into between the NIH and the State Historic Preservation Office, the Maryland Historical Trust (MHT), since demolition of buildings is an adverse effect to historic properties. While the buildings are no longer in use, the legacy of their exemplary staff and their important work endures.

The NIH's Bethesda, Maryland Campus was established in 1936 after moving from downtown Washington, D.C. The historic core of NIH, which includes Buildings 1–6, was built from 1937 to 1941 in a Georgian Revival style. The buildings are unified by their Flemish bond brick, rectangular massing, classical entrances, and gabled dormers. As the duties and responsibilities of the NIH grew, the campus quickly expanded beyond this historic core, and additional architectural styles were chosen, often for efficiency and economy. Buildings 29 and 29A were a dramatic step away from their Georgian Revival neighbors in terms of architectural style. Aerial images below (from circa 1960, circa 1975, and 2014) show the progression and growth of the campus over time, with the historic core, the large NIH Clinical Center (hospital building), and then the expansion of specialized laboratory buildings like Buildings 29 and 29A.

In 1960, Building 29 was at the edge of the NIH Bethesda Campus. As seen in the aerial below, the parking lot to the north of the building, and the parking garage that is today to the south of the building were not yet constructed. By 1975 (see aerial below), additional buildings had been built near Building 29 and 29A, expanding the campus south and west. There were parking lots to the north and south of Buildings 29 and 29A as well as an expanded sidewalk system for pedestrian circulation. In the wake of September 11, 2001, Dr. Ruth Kirschstein, as Acting Director of NIH, oversaw the establishment of a variety of security measures such as installation of the Bethesda campus perimeter fence with more regulated access to the campus. By 2014, the NIH campus had expanded even more, as seen in the aerial below.

Building 29B was constructed from 1993 to 1994 to serve as additional space for biologics regulation staff (now part of the FDA CBER). Building 29B was connected to 29A via pedestrian bridge, much like Building 29A was connected to Building 29. The FDA CBER left the NIH campus in 2014, moving to the FDA White Oak Campus and leaving Buildings 29 and 29A vacant. Until 2014, Buildings 29, 29A, and 29B represented the only facilities, not just on the NIH campus but in the entire United States, that have functioned since their construction for the primary purpose of regulating biologics. 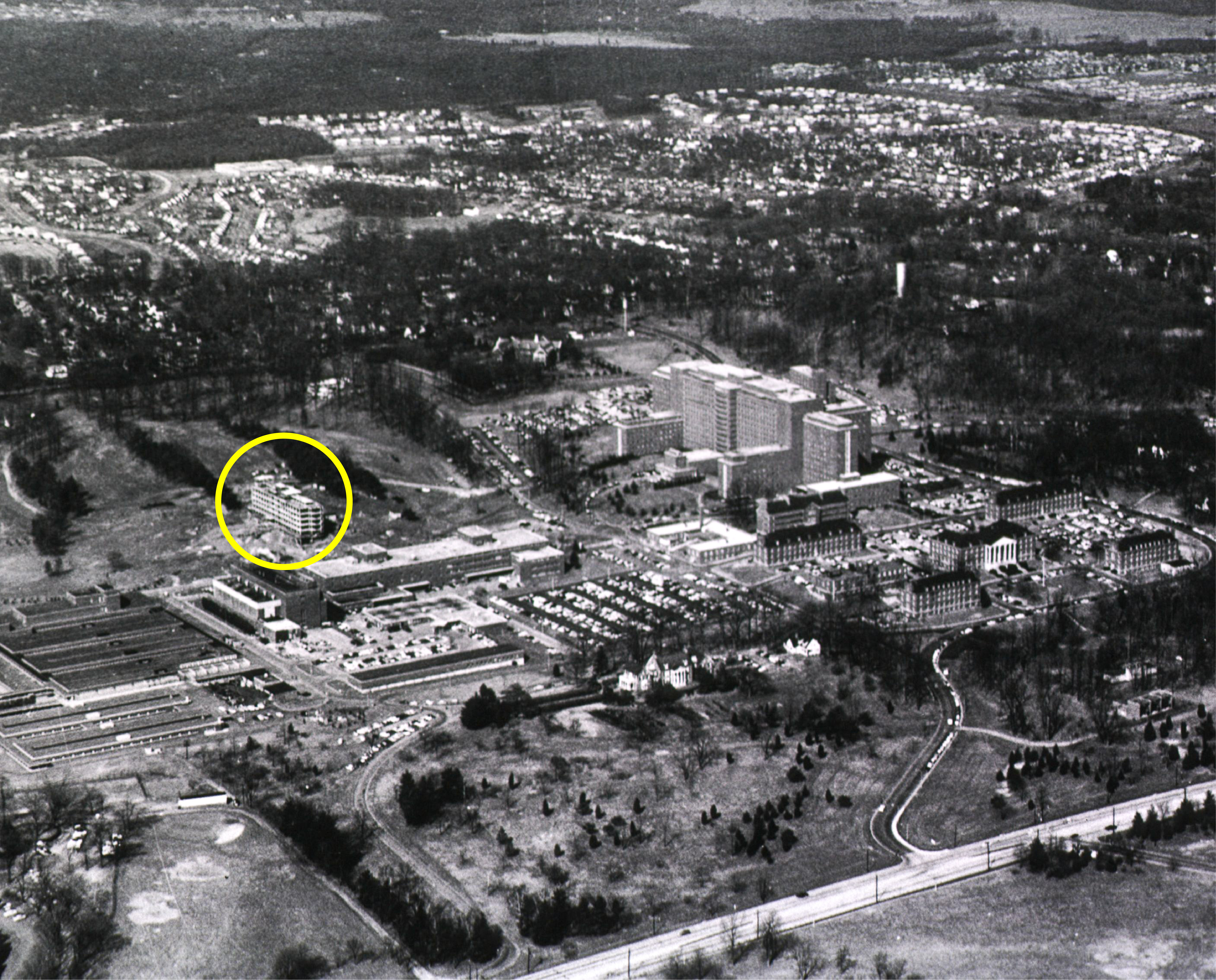 Circa 1960 Aerial View of NIH Bethesda Campus with Building 29 (under construction) at center left, circled. The tall NIH Clinical Center (hospital building) is at the right center of the photo, with the NIH historic core adjacent to it.  National Library of Medicine

Within two years of finishing construction of Building 29, NIH began planning Building 29A as a laboratory annex. NIH's director at the time, Dr. James Shannon, described the quickening pace of vaccine development when he sought to justify to the Congress his request for funds for planning Building 29A so soon after Building 29 had been completed. The DBS had just established standards governing the production and testing of oral polio vaccines developed by Albert Sabin, the development of measles vaccines was well underway, and a vaccine for infectious hepatitis was thought to be on the horizon.

Justifying the request, Shannon stated that, “Although laboratory testing space, including quarters for experimental animals, appeared adequate with the move in 1961 to the new Biologics Standards Building, requirements for new programs in 1962, particularly live polio virus vaccine and measles vaccine have increased considerably” (House Committee on Appropriations, Hearings on H.R. 1916, 87th Congress, 2nd Session, 936). NIH quantified the growth in a prepared statement, stating that, “In the past five or six years the importance of biologics control and its role in the future development of preventive and therapeutic medicines has continually grown until in 1962 the program is approximately three and one-half times larger than when the Congress authorized the construction of the first Biologics Standards Building in 1956” (Senate Committee on Appropriations, Hearings on S. 1514, 87th Congress, 2nd Session, 1962, 474). 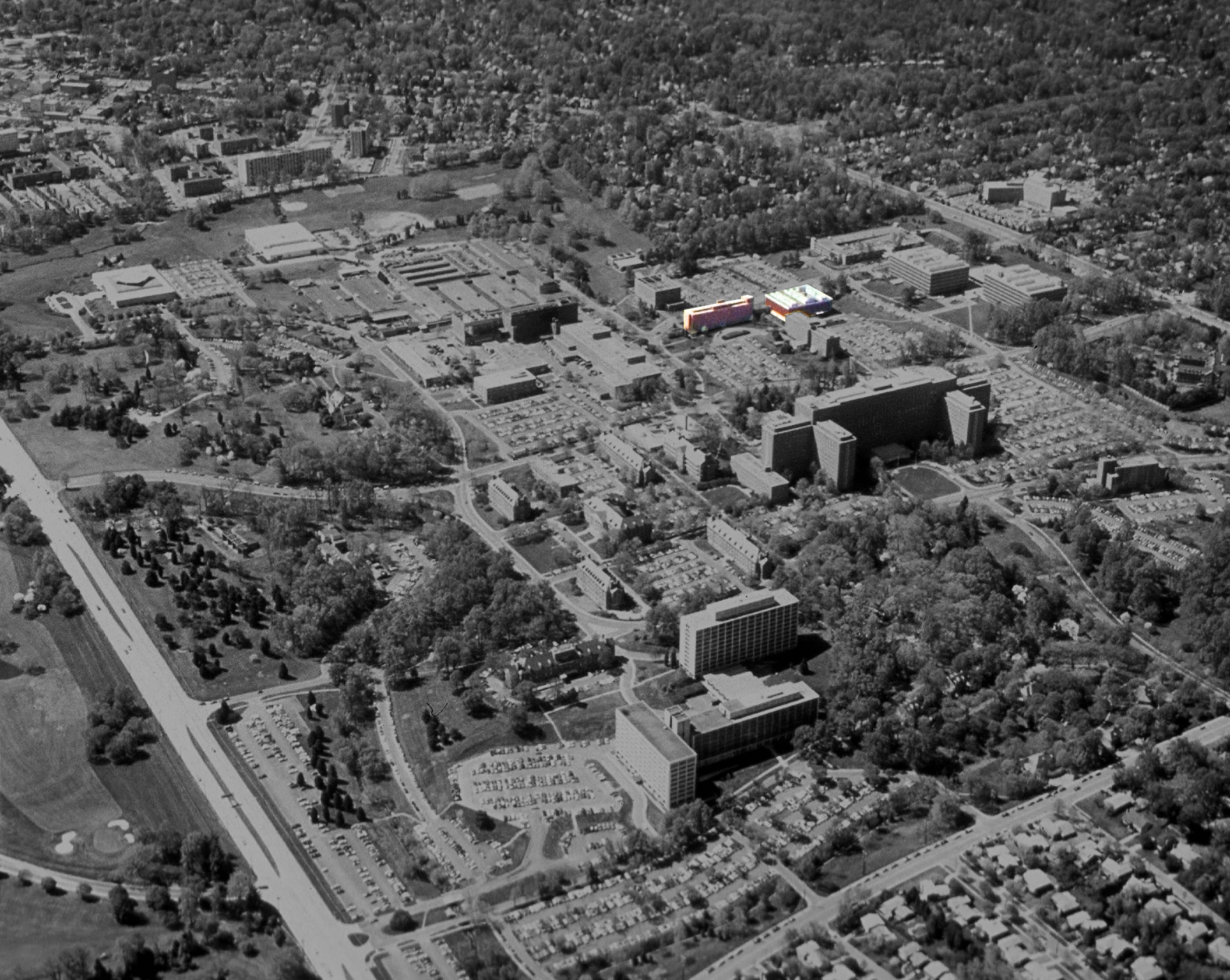 Circa 1975 Aerial View of NIH Bethesda Campus with Buildings 29 & 29A at top center of the photo, highlighted in color, the NIH Clinical Center (hospital building) at center right of the photo, and the historic core of campus to its left, somewhat dwarfed by larger buildings that surrounded it as the campus expanded. National Library of Medicine 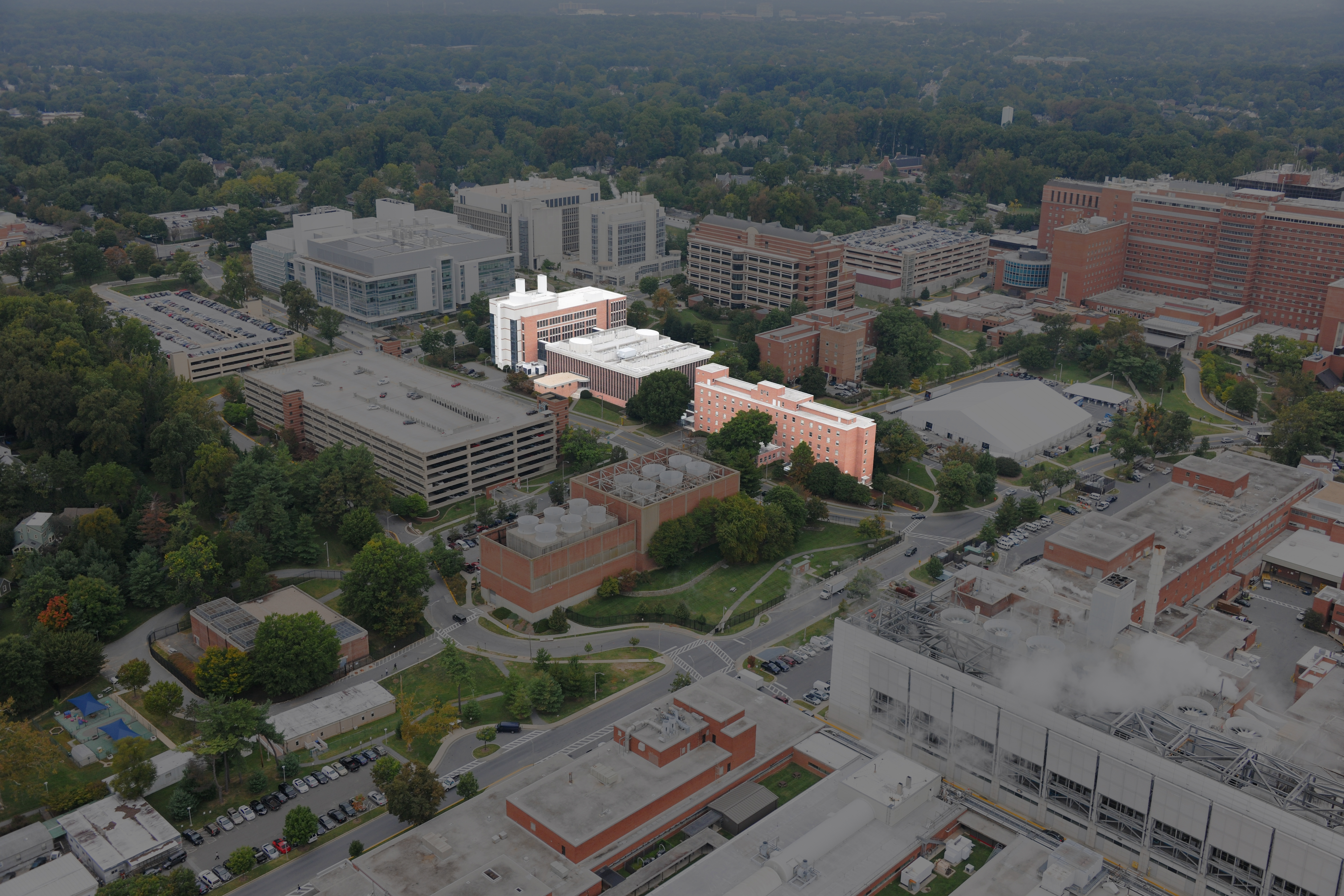 September 2014 aerial image of NIH Bethesda Campus with Buildings 29, 29A, and 29B at center, highlighted in color, and the large NIH Clinical Center (hospital building) at top right.  NIH Office of Research Services